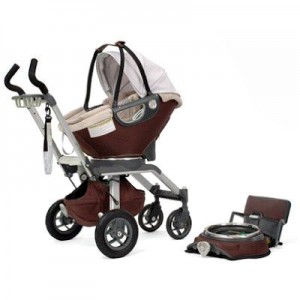 The Orbit Baby Infant Seat (and the

updated Orbit G3 system)  is a unique infant seat that’s less an individual seat than a system.  When you buy the infant seat you are also buying the stroller, starting you on the path toward stylish products with a green twist.  This is a rear-facing only child restraint for kids birth-22 lbs. who are less than 29” tall.

The Orbit Infant comes with an infant insert and harness strap covers.  The stroller comes with 2 built-in cup holders and a storage basket (called a Cargo Pod).

5-point Harness to 22 pounds: The harness is good quality and is nontwisting.  The buckle tongues are a bit smaller than the harness width so the harness cups at the edges.

Rotation for Docking on Base: Orbit has the only infant seat that can be placed in any position on the base, then rotated into the correct rear-facing position for travel.

Adjusting the harness height is accomplished by unzipping the cover on the back of the seat, removing the shoulder straps from the splitter plates, and re-threading them through the desired slots.

Recline Adjustments: Recline is accomplished by adjusting the base.  If the ball in the recline indicator on the base isn’t in the green zone, the instruction manual recommends a tightly rolled towel to aid in achieving a proper recline.

Harness Adjuster and Use: To tighten the harness, pull on the harness adjuster strap on the front of the restraint. It is similar to the type found on many car seats and is easy to pull. The buckle clicks audibly when each buckle tongue is inserted. The too-large chest clip has printing on it that says, “ARMPIT LEVEL.”  The chest clip is pretty stiff to unclip.

Note: Orbit does allow the use of LATCH in the center seating position of the back seat if the lower anchors are spaced between 11″ and 20″ apart, there are no air bags, and the base can be level.

Installation: The Orbit base is very unique: you won’t see anything else like it, so it installs very differently as well.  It has a typical belt path and you do place the seat belt or LATCH belt through it and snug them up, but that’s where the similarities end.  On the back of the base is a knob called the StrongArm Knob.  Twisting this knob provides torque that tightens down the base into the vehicle seat; while the base doesn’t mention specifically using the StrongArm Knob, the manual does say to use it.  It’s a feature of the seat, so follow the manual and use it.  It makes a huge difference and makes installation easier.  Like I said earlier installing the base in my van with LATCH was a breeze; it was more work with the seat belt.  My neighbor let me borrow her Suburban for a trial installation and it installed beautifully there with the seat belt, both with the base and without.

Crotch Strap Adjustment: There is only one crotch strap slot located approximately 6.5″ from the back of the seat.

Padding, Comfort and Appearance: The Orbit Infant cover is nicely padded.  The cover on the restraint I tested is called mocha/khaki and the fabric is a soft microfiber.  It’s machine washable on the gentle cycle.  The cover is, without a doubt, the easiest cover I have ever removed from any carseat.  It’s attached to the seat with plastic clips that slip under the edge in 4 places; once those are slipped out, open the velcro in the middle to pull the harness through and the cover is off.  There is no need to remove the harness and it took me about a minute to remove it.

The harness straps are gray and chest clip is black.  The strap covers and head insert are entirely optional and may be removed at any time.

Infant Insert: An infant head roll (called “infant insert” by Orbit) is included with the seat.  The infant insert is styled in the same manner as the cover.  When I placed an 8 week old weighing 11 lbs. in the seat with the head roll in place, it was a challenge to smoosh her head in place.  It definitely will keep a baby’s head straight in line, but I personally would have removed it for babies larger than typical newborns.

It’s Green: Orbit is headquartered in northern California—they like to do things differently there ;).  So, the fabric on all things Orbit is certified by the International Oeko-Tex® Association to have fewer chemicals and irritants in it.  In late 2009, Orbit released a line of organic cotton/wool fabric for their footmuffs and carseats.  Orbit also meets flame retardancy requirements without using harmful chemicals.

7 Year Expiration and Crash Policy: The Orbit Infant has a 7 year expiration date.  Orbit specifies in the Warnings section of the manual not to use the seat if it is in a crash.  Orbit also has an “After-Impact Exchange” program.  http://www.orbitbaby.com/support/faq.php#faq

Airplane Certification and Use without Base: The Orbit Infant is FAA-approved for use in aircraft and can be used without the base.  It is a heavy restraint weighing 11.7 lbs., so if you do travel with it, you’ll want to use its matching stroller to avoid having to carry it.  The base itself weighs 15.7 lbs., something you won’t want to heft from vehicle to vehicle.

Value: I can’t talk value without comparing the system to what systems you can build yourself.  You can compare the Orbit Infant to other infant seats, sure: it has energy absorbing foam, deep side walls, built-in lockoffs, non-twisting harness straps, strap covers, and a Paparazzi Shield (OK, you and I may use it as a sunscreen, but it’s so much cooler to call it a Paparazzi Shield).  But, the infant seat isn’t sold on its own—it’s sold with the stroller.  So, let’s compare to other high-end strollers.

So you can see how they all add up.  If you choose special edition/designer fabrics for the other strollers, that will increase the price by up to a couple hundred dollars.  Image, baby, image.

Construction: The Orbit Infant is made in China, but it’s one of the most solid seats I’ve seen.  There’s nothing about the carseat that makes me feel like I couldn’t drop it from 10 feet and feel it would just look a little scraped.

Instruction Manuals: Some of the best in the business!  I’ve said it before and I’ll say it again, the manuals are easy to read, have clear pictures, and are color-coded.  What else can you ask for?

Harness Slot Height: The bottom harness slot height is 9″.  Some newborns and small infants won’t fit a slot height that tall until they are a couple of months old and the instruction manual specifies not to use harness slots that are above the child’s shoulders.

Installation Issues: I had trouble installing it in my ’05 Sienna with the seat belt, but that’s not an unusual problem for me.  The buckles are forward of the bight (vehicle seat crack) and create problems with some carseats and this is one.  Because of where the buckle is placed, the seat belt is placed very low in the belt path on the base, which means it enters the built-in lockoff very low.  I felt at times (I installed it many times 🙂 ) that I was going to break the lockoff clamp by pushing too hard on it.  It did install tightly in the end, but with a little effort.  The built-in lockoffs on the infant seat itself simply did not work with my seat belt configuration.  When installing the infant seat without the base, because of the position of the buckle, the seat belt slid out of the lockoff and I would need to either lock the belt or use a locking clip to hold the belt tight on the infant seat when not using the base.

Cover: While I was gingerly carrying the infant seat with base down to my neighbor’s house to try it out in her vehicle, somehow the edge of the cover got scuffed.  It’s about 3/8″ in diameter, so small, but it’s still a mark on the front of a very expensive carseat.

The Orbit Infant has a lot going for it with all of its safety features and practically-installs-itself base.  It has a unique, forward-thinking design that you’ll either love or hate, but it will definitely turn heads while making other parents envious as you’re putting your infant into your vehicle sideways and turning her into position.

Let me start by saying that I feel like a bit of a poser in doing this portion of the review.  I may be into carseats, but I’m definitely not into strollers.  I’ve had 3 strollers for my kids: a Century travel system stroller that came with my Century SmartFit infant seat, a deluxe $40 umbrella stroller (it reclined—I loved it!), and my $120 double jogging stroller.  So.  That’s where I’m coming from with this review—pretty much anything is going to be really nice ;).

Weight Limit: The stroller has a weight limit of 40 lbs.

Assembly: I was impressed with the Orbit stroller when I pulled it out of the box with 1/one/uno hand.  It’s lightweight and relatively compact.  The only assembly needed was putting the front wheels on and once I found those (they were tucked into the Cargo Pod)  and stuck them on, I was ready to push.  I liked the fact that I didn’t need to read the manual to know how to assemble it (there was a quick start poster on the inside of the box) and to use it.  With my other strollers, I needed to read the manual and do some assembly with tools before I could use them.

Stability: I’ve been tooling the stroller around the house over various surfaces and toys and I’ve been impressed.  I’ve also tried shaking it from side to side, trying the “Heather Dump Test” and the width of the back wheels help keep it from tipping.

Tires: The rear wheels are inflatable which always improves the stroller experience for the child and the parent.  It’s so much easier to push a stroller with properly inflated tires.  The stroller comes with a maintenance kit that includes a pump for inflating the tires.

Cup Holders: There are 2 and they are included!  They are a bit shallow for me, though.  My 700 mL plastic water bottle felt tippy in one.

Handle Height: I’m 5’6″ and found the lowest handle height (36 ½” from floor) to be just a bit too low for comfort.  Adjusting the height is very easy: push the button on the inside of the frame and pull the handle up until it clicks into the next position.  The middle position measures 40″ from the floor.  I’m sure my 6’5″ dh would appreciate the tallest position (43″ from floor); it was much too high for me to push comfortably.

Cargo Pod: This is Orbit’s fun term for a storage basket on the bottom of the stroller.  If you can fit something about the size of a grapefruit through the opening, then you won’t have to remove it; otherwise, you’ll have to slide the pod off the stroller to open it and place an object inside.  But compared to say, the Bugaboo Frog or the Stokke Xplory, at least you have some storage.

The Hub: It wouldn’t be a system unless it had the patented Orbit Hub on it that accepts the infant seat, the Toddler convertible seat (review coming soon!), and a stroller seat that’s used only on the stroller, not in a vehicle.

I’m sure there are some other things you stroller aficionados would look for, but like I said earlier, I think it’s really nice.

G3 line.  It has improved labeling, an improved instruction manual, an improved belt path on the base, even more eco-friendly fabrics and some cosmetic upgrades.  It retails for $980.

The webpage for the Orbit Infant Seat – www.orbitbaby.com/products/index.html

Want to check out an Orbit Infant Seat and Stroller?  Visit our sponsor’s page, http://www.kids-n-cribs.com/orbit-baby.

This carseat and stroller were provided to CarseatBlog.com by Orbit Baby.