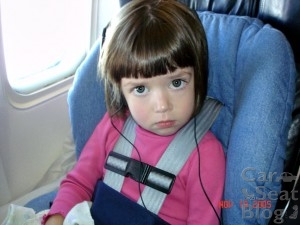 The issue of how to best handle flying with kids and their carseats is something that comes up repeatedly on the Car-Seat.org forum. Many safety-conscious parents will bring the carseat with them knowing that their child will need to use it once they reach their destination. I applaud all those parents for doing the right thing! However, for a variety of reasons, most parents don’t actually bring the carseat onto the plane and use it for their child during the flight. I suspect that many of those checked seats that I see on the baggage carousel belong to children who wound up as lap babies on the flight. For the record, here at CarseatBlog we always recommend that you buy a ticket for your child (regardless of their age), bring their carseat and use it on the plane.

Regardless of why parents chose to check their carseats, the fact remains that most travelers flying with CRs in tow do check them instead of lugging them through security and using them on the plane. And seats checked with regular luggage probably get tossed around and manhandled the same way luggage does. I somehow doubt that the baggage guys suddenly look at the carseat and decide to handle it with care so they don’t crack the EPS foam, know what I mean? 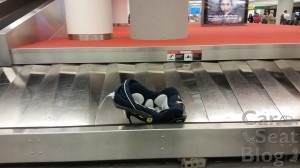 But what if you’ve already traveled with your carseat and checked it? Perhaps even multiple times? Is it still safe to use? That’s the controversy.

There are some child passenger safety advocates that will argue that a checked carseat could have sustained significant damage during the time it was out of your sight and should be replaced as a precaution. Some might actually go so far as to suggest that the checked carseat is now “as good as crashed”. I personally think that stance is a little over the top but I understand the logic behind those opinions. I’ve seen how beat-up my luggage is sometimes when I reach my destination. Plus, many frequent flyers have witnessed first-hand some of the abuse that luggage endures as it’s loaded and unloaded from the aircraft.

What we’ve lacked in the past is any type of official policy or statement from the CR Manufacturers regarding checked carseats. The instruction manuals are full of do’s and don’ts and even show us how to install the [harnessed] carseat properly using the lap-only belt on the aircraft. But there has been absolutely no attention given to encouraging use of the CR on the plane, and subsequently no mention of what you should or shouldn’t do if you’re flying but not planning to bring the carseat on board.

The Manufacturers Alliance for Child Passenger Safety issued a statement for CPS Technicians/Instructors on the subject:

Car Seats Gate-Checked or Checked as Luggage
Car seats are designed to withstand most motor vehicle crash forces. In general, the MACPS does not consider a gate-checked car seat or a car seat that is checked as luggage to be one that has experienced forces equivalent to a motor vehicle crash. Once the destination is reached, it is recommended to inspect the car seat to make sure no visual damage has occurred and all aspects of the car seat function properly.

I think that’s certainly a reasonable policy but I would really like to see all CR Manufacturers take it a step further and include language in the instruction manuals that encourages the use of the CR on the plane and discourages checking it with regular luggage. Gate-checking the carseat should be encouraged if and when it isn’t possible to use it on board the aircraft for the child. If nothing else, a gate-checked seat is much less likely to be lost than a seat that was checked with luggage.

I appreciate that the MACPS has taken the time to address the issue. I trust that they looked at the issues seriously. I’m not a carseat engineer, nor do I play one on TV, so I’m going to defer to them on this issue and trust that they know what their products can withstand.

On this end of the table, we’re going to continue to advocate for securing children in aircraft with the same passion and dedication that we have for securing them in motor vehicles. With that in mind, let’s list the top DO’s and DON’Ts of flying with kids and carseats.

Check out our related blog posts on flying with kids and carseats:

Lap Babies on Airplane – A Warning All Parents Must See

Flying with a Car Seat? Know Your Rights!

Myth Busting: We’re All Going to Die in an Airplane Crash Anyway so Why Use a Carseat?

Airplanes, Carseats, and Kids—What You Need to Know Pt. 1

Airplanes, Carseats, and Kids—What You Need to Know Pt. 2

An Open Letter to the FAA