Over a year ago, my dh let me know that a new electric car company, Tesla, was taking pre-orders for their cars. The Tesla was going to be an all-electric plug-in car, just what he wanted. Matt had looked at the Prius, and we had the Lexus CT 200h for a while (and his mom even has one!), but they just weren’t what he was looking for. This new Tesla Model S had the perfect combination of geek: lots of electronics, lots of batteries, lots of flash. Could he please, please, please buy this new car? Please? How could I disappoint him? Besides, when one back is scratched . . .

Anyway, the kids had a day off school early in November so we decided to maximize the fun by taking a trip to Disneyland. We’ve been there many, many times and were season pass holders at one point, so we were looking forward to the trip. But this trip was different

because Tesla Motors recently opened a small showroom in the Fashion Island mall in Newport Beach, and that was the real point of the trip, right? Even the kids were excited to take a test drive in daddy’s new car because after all, we’ve heard about this car every day, several times a day—many times a day. For.The.Past.Year. Matt has even already wired an outlet in the garage in anticipation of plugging in his new car, even though its arrival isn’t expected until probably February. I really wanted to see the car to make sure the company that’s had our money for over a year is living up to its promises.

The model we test drove was not the model we’re buying, unfortunately. They only had the Model S Performance model available to drive, which has a carbon fiber spoiler we all caressed. Of course that’s not the only upgrade! It also goes 0-60 in 4.4 seconds. Yup. Car of the Year. Who needs Disneyland when you have a Tesla Model S?

We filled out the requisite paperwork e-work on the iPad then went out to the parking garage where the S was sitting underground, bathed in ethereal glowing sunlight. Matt, who’s 6’5”, adjusted the driver’s seat not quite all the way back—a first! For a 4-door sedan (saloon for you Top Gear lovers), the feel was a cross between a sports car and a sedan—sporty yet comfortable. The salesperson went through the features of the car on the 17” monitor. There are only 2 buttons inside the cabin: the button for the hazard lights and the button to open the glove box. As they were going over the features, I was in the middle of the back seat getting my kids situated on either side of me. Unfortunately, due to production problems for the rear-facing kid seats option that turn the 5-seater into 7-seater, they can’t keep them in the stores for buyers to take a look at, so we didn’t get to see or test them out. However, I can say that with my 5’4½” 95 lbs. ds on one side and my 4’8” 63.9 lbs. dd in a BubbleBum, we never rubbed shoulders (I’ll give you that I’m 5’6″ and no more, think again!).

Even though we were in Southern California and freeways are a dime a dozen, there’s really no point to taking the car on one right? You can go faster on surface streets. So we navigated our way out of the mall circle and onto a street where the salesperson told Matt to turn right at the next stoplight. Once he turned, she said, “punch it,” and he did. YEAH BABY! We may not have done 0-60 in 4.4 seconds but our heads whipped back and it was very much like the Disneyland thrill rides we had just left. And what was so great about going so fast? The only sound was the sound of the tires on the asphalt. Oh, and us screaming, “Wooooo!”

Safety: With the driving test over, let’s get down to the basics. Is it safe? Yes. The heavy batteries line the entire floor of the car, keeping it bottom-heavy, rigid, and stable. The center of gravity is at 17.5”. It has all the requisite safety features you’d expect of a luxury car: all the airbags, stability control, traction control, etc. To be honest, the headrests are lacking. As you can see on my dh, he doesn’t fit in the backseat because his head will be hitting the roof when there’s no sunroof and his head is completely over the headrest. But for average-sized people, they should work fine. There’s also a crash sensor that automatically disconnects the battery so first responders won’t get zapped trying to pry you out of your car should the need arise. NHTSA and IIHS haven’t yet crash-tested a Model S, but Tesla has at speeds of 50 mph and says it outperforms the 35 mph standards and exceeds the roof crush standards.

Kids and Carseats: I don’t know :). I didn’t haul one to SoCal to try out and we won’t get our car until February or so. There are 2 lower LATCH locations and 3 top tether locations. I hang my head in shame letting you know that I didn’t stick my fingers in the bight to feel for the locations of the lower anchors. Sometimes I fail as a tech. But in my defense, I was distracted by all the shiny things (the people milling about wanting to see the car too didn’t help).

Cool Stuff: I’m going to list these in no particular order.

The Tesla S charges at 5 miles of range per hour on a standard household 110 volt outlet.  It charges at 31 miles of range per hour on a 240 volt/50 amp (like an RV plug) or 62 miles per hour with a 100 amp high capacity wall charger ($1,200) and optional dual chargers on the car. Tesla is in the process of installing always-free Supercharger stations throughout the country, with several already in place in California. These Superchargers will “fill” your batteries about half-full, depending on your model, in a half-hour. If you have a handy husband, he can install your very own garage outlet several months before you need it AND put a sticker on it labeling it for its purpose.

I could go on and on about the S, but we did only have a few moments with it in the scheme of things and I’d rather conclude the preview here than paraphrase what others have written. We’ll have an honest-to-goodness full-on review of the Tesla S with 60 kWh battery when our number is called sometime early next year and the car is delivered to us. I fully believe this will be a viable family car capable of competing with the Lexus ES 350h in terms of class. As a plug-in, it stands on its own. 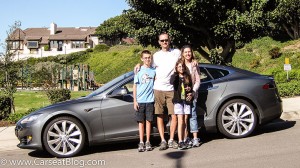