I first fell in love with this seat at Lifesavers in March. At the time, I was newly pregnant and not planning on using an infant seat this time around…until my eyes fell upon the lovely, colorful little capsule that is the Cybex Aton

Shortly after the seat arrived on my doorstep, and shortly before my baby was born, it looked like the seat would be short-lived in the United States as the US distributor seemed to be getting out of the car seat market. I wondered whether there would even be a point in writing a review. Then word came that the Aton will indeed be sticking around, and there was much rejoicing.

So without further ado, here are my thoughts on the Aton, now that I have used it for a few weeks with my son, Oliver. Heather already covered the specs and basics of the seat in her very thorough review, so I’m going to focus more on the day-to-day applications. There is a lot to like, and a few drawbacks, one of which I think is fairly significant and will get to shortly.

I had played with the Aton at Lifesavers and found it very easy to install on their test seat. Installing in real life was just as easy. I’m not sure it’s the easiest base to install (the Keyfit is pretty darn simple), but it’s at least a close second.

My first installation was with LATCH in the center of our Dodge Ram MegaCab. Now, in all fairness, the back seat in that vehicle is huge, and the two other seats I have in there (Radian and Monterey) are relatively narrow, so it’s not like getting three-across was going to be a problem. Still, though, you can see the enormous amount of room between the Aton and the Monterey, and there was an equal amount on the other side. The Aton would definitely be a good bet in a tight three-across situation. 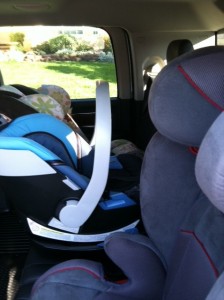 After the baby was born I installed the Aton in the driver’s side captain’s chair of our 2010 Honda Odyssey using LATCH. Again, super-fast, easy install.

I first put my son in the seat when he was about five days old. The harness covers were a bit long, so I removed them. You can see the difference below. (Yes, he slept through the whole thing.) 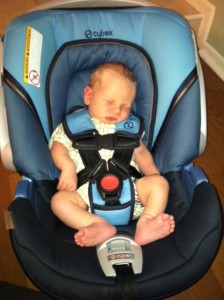 Heather’s review mentioned that the seat rattled a lot without a baby in it, and we also found that to be true. With a baby in the seat, though, it is silent (the seat that is; not necessarily the baby).

Something else Heather mentioned was the release mechanism, and how some people are concerned with the two-step process to remove the seat from the base. (It involves pushing one button in and another down.) Although there are technically two steps, they can easily be completed as one motion. In fact, it’s one of my favorite features of the seat, and I wish all infant seats had a release that smooth.

One complaint I have–and that others have mentioned, too–is the short canopy. If it rotated all the way forward, it would be great. As it is, though, it doesn’t offer much protection or privacy. For example, when I park at my older son’s taekwondo class, the sun hits the car from the side, and the canopy doesn’t rotate enough to shade Oliver’s eyes. They could definitely make an improvement there.

My other complaint (the one I feel is fairly substantial) is that I found the harness very difficult to loosen and impossible to tighten while it’s in the base. Upon examination, I realized that the splitter plate gets stuck on the lock that protrudes from the base. (In the photo below, I have the harness loose and the seat tilted up so you can see how it will hit the orange lock.) 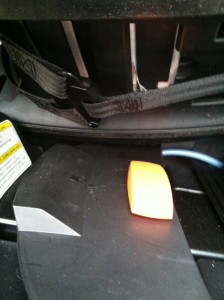 If you’re like me and tend to leave the seat in the car, it gets very annoying to have to remove the seat just to get the baby in and out. I realize that most people do take the seat out of the car each time (that is, after all, the main attraction of an infant seat), but even people who typically carry the seat with them might leave it in the car now and then.

This also won’t be an issue if you don’t tighten and loosen the harness each time, but I’m a tightener/loosener, especially with squishy newbies. I also imagine this wouldn’t be a problem with a larger baby on a higher harness setting, as the splitter plate wouldn’t wind up as far down. For me, though, the issue was aggravating enough that I almost stopped using the seat.

Initially my plan was to use the Aton for a couple weeks to get a feel for it, then put it in my husband’s truck as a back-up seat. Over time, though, I found that I wanted to keep using it, despite the splitter-plate problem. For that to make sense, though, I would need to get a stroller to put the infant seat on. After all, if I’m going to have an infant seat, I might as well make full use of it, right? Being able to put the seat in a stroller would also alleviate some of my problem with the splitter plate since I’d be likely to take the seat in and out of the car more often.

I have a Baby Jogger City Mini, so I talked to my friend Janine, who works at a stroller store, about getting an adapter for it. She offered to meet me at her house after work one evening so I could try it out.

When I got to her house, Janine was excited to tell me that for Maxi Cosi (and, by extension, the Aton), you don’t need the bar that typically goes across the stroller; you just need these clips on the side. I thought that was great, because it meant my 2-year-old could ride in the stroller without my having to make any adjustments. 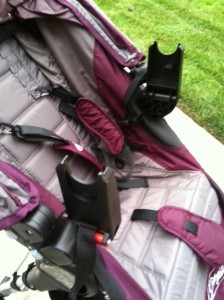 She showed me how to snap the brackets onto the side, then we put the car seat (complete with Oliver) into them. The seat gave a satisfying click, and we stood back to appreciate how nicely it worked. 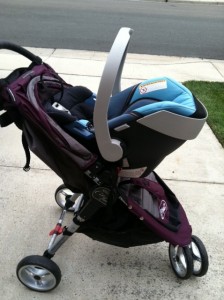 Then Janine started fumbing around the back of the seat.

“How do you release it?” she asked.

“Oh my gosh! The release is on the base!”

“What? It’s on the base?” She seemed not to believe me.

“Yeah, that’s how they make it so light!”

“Then what’s this thing?” Janine pulled at something on the back of the seat.

“That’s the belt guide for installing without the base!” I panicked some more.

We pondered what the heck we should do. I resigned myself to the fact that the seat would have to stay in the stroller at Janine’s house until at least the next day, when I’d be able to call Cybex to find a solution. Janine is also a CPST and the mom to two young kids, so I figured she’d probably have a seat I could borrow to get Oliver home.

Janine poked around some more and sort of instinctively pushed these two little buttons (that I had never noticed) above the handles. Those released the seat, and all was well.

When I got home I checked the manual (which, yes, I should have had with me), and on the diagram of the seat there is, indeed, a little line pointing to the travel system release buttons. You can see the gray/silver rectangles here, just to the left of the handle:

I have used the seat with the stroller a few times, and, with three kids, it really is convenient in some situations, like when I need to change my dripping wet older kids into their street clothes after a swimming lesson. It’s also nice for getting compliments in the mall elevator, as I did the other day when another mom commented on how “cool and futuristic” the Aton looked.

I’m not sure if I’ll continue to use the seat until my son outgrows it, but I have no plans to abandon it yet. The harness-tightening issue still nags at me, but the overall charm of the seat outweighs its shortcomings. I’m glad the Aton

is staying in the US market for now, because I do think it can be a real contender here.