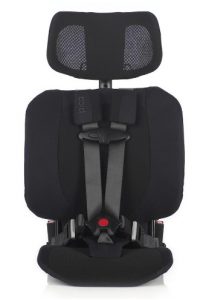 Anyone who has ever flown with kids knows the struggle. You have to carry your suitcases, the kids’ carry ons, car seats, whatever random snacks you acquired while trying to keep the kids from ruining everyone’s airport experience, and then you somehow have to get your kids onto the plane, without any free hands to physically wrangle them. Then the car seat needs a seatbelt extender or the buckle is right in the small of the kid’s back and the end result is just that everyone is miserable.

Or you don’t bring a seat and you rent one at your destination and it’s a) not the right seat, b) it’s disgusting, c) you don’t know its history or whether it’s safe, but mostly likely d) all of these horror-scapes above.

Or maybe you’re traveling in a different city and you need to take an Uber or Lyft or a cab with kids. You can pay extra in some cities for a ride share with seats installed, but it’s more expensive and harder to come by and you weren’t the one installing those seats, so it’s still a risk. You can legally choose not to use a carseat in some places but then you have to restrain your kids in a moving car and unfortunately all the crash probabilities and risks don’t go away on vacation. In short, traveling with kids is a mess.

Have I convinced you never to travel? Just hold on for a moment, because the solution to this stress may have just landed on the car seat market.

Several months ago, a new company made waves when they announced a travel car seat. WAYB (pronounced way-bee) claimed to have the solution with a new seat, the WAYB Pico. I was one of many parents and CPS technicians who was very intrigued and as time as passed, I’ve kept my eyes and ears open for more news. A few months ago, I finally got to see it live and in person. My first impression was how small it was, because it is really, seriously small. And yet somehow, abundant enough to live up to its limits. Before I spoil the whole review, let’s dive into the details. 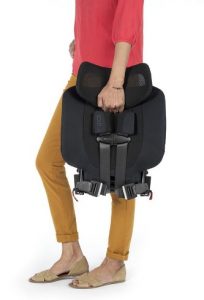 The first time I saw the Pico, I was skeptical. It is SO small. I worried that it wouldn’t fit longer torsoed kids or would be outgrown too quickly, especially with a 45” height limit. And part of that was just seeing it in a room without a kid to compare it to, but rest easy, my eyes deceived me.

I put all 3 of my kids, ages 7, 4 and 1 into this seat and somehow they all fit. It might be magic because it’s seriously the smallest seat I’ve ever seen. 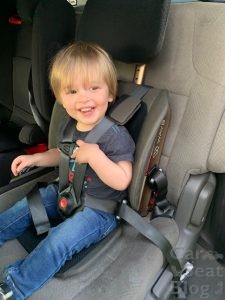 I’m going to start with the littlest, who is 22 months, 25 pounds and 33 inches. I was easily able to adjust the seat to hold him totally securely, despite being on the smaller end of the limits of the seat. Now, the tricky part is that he can’t legally ride in this seat in California, despite being within the stated limits of the seat, because he’s not yet 2 years old. If you choose to use this seat for travel, you’ll need to research the rear facing laws at your destination, because you may not be able to use this seat for your younger toddlers everywhere. 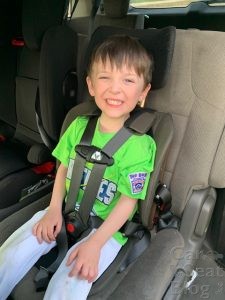 also has the longest torso of any child I have ever met. And even with that, he still has a solid 2-3 inches of torso growth left in the Pico. I was absolutely shocked. He fit well and said the seat was so comfortable that he wanted to keep it in the car. That’s a ringing endorsement if there ever was one. 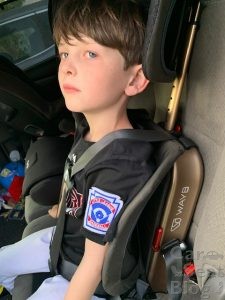 My oldest kid is 7 years old, 47.5 inches and 49 pounds. He has outgrown this seat per the stated limits and I would not use it for him and am not recommending you do so either, just to be clear. I just put him in it because I wanted to get a sense of whether the harness would truly accommodate a 45” inch child and I feel pretty confident in saying that it really will. The shape of the seat definitely gives more room than the written measurements would suggest. My oldest had outgrown it by a sneeze, even though he was almost 3 inches taller than the limit.

The adjustment process is a little tricky at first because the harness adjusters aren’t what you’re used to. There’s one on each hip strap and they resemble a lower anchor adjustment mechanism. You have to tighten each side independent of the other, which is a little tricky at first, but it gets easier with practice and it’s not hard to do. There’s no moving the shoulder straps or the crotch buckle because there’s only one slot, which is kind of great, actually. I do think that chest clip is oddly hard to place on some kids because the straps go so high that your perspective is skewed. So if you decide to get the Pico, stand back and look at the child, not the seat as a whole, to make sure things are in the right spot.

So, the Pico will fit, in terms of width and height, just pretty much anywhere you could put it. It’s that small. It solved a terribly tricky 3 across for me last month when I went back to work and my babysitter had to haul 3 kids in a compact car.

The lower anchors can be used the whole lifespan of the seat because it’s so light and they are definitely the easiest way to install it. The only tricky part of the lower anchor installation is that a little bit of slack can get caught in the lower anchor belt on the non-adjuster side, so you just have to be watching both sides to make sure to remove it all.

The seatbelt installation is not complicated by any means. There are red seat belt guides that hold the belt in place, then it’s a standard install (lock the belt, remove the slack, get less than an inch of movement at the belt path). Depending upon the angle of your seatbelt, it may bunch lightly, but it doesn’t make it terribly challenging to remove the slack, it just may look a little different than you may be used to. 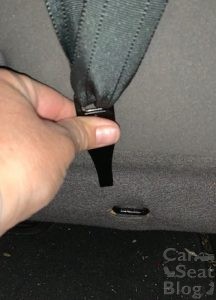 In all my vehicle fit tests, I found one issue that popped up a few times. The tether (the top tether, for those who know it by that name) is a reasonable length, but because of the compact design of the seat causing it to sit so low, the tether strap is not long enough to reach the anchor point in some cars. In my primary vehicle (2015 Honda Odyssey), it’s 2-3 inches too short. In several other cars (mostly passenger cars), it fit without issue, so it’s really a matter of which car you’re in and how far down your anchor point is. WAYB has tested the Pico with just the seatbelt and with just the lower anchors and it passes crash testing those ways, but we strongly recommend the use of a tether whenever it is available and this is no exception to that. I’ve spoken with WAYB and their FAQ now states, “The Pico’s tether strap is built to reach almost any tether anchor locations, but if Pico’s tether hook does not reach your tether anchor please reach out directly to WAYB at help@wayb.com to receive a free tether strap extender for your Pico.” If you find yourself in a vehicle where the tether anchor is very far from the seat, you may check to see if any of the other seating positions have a closer anchor, as sometimes the middle seat’s anchor point is better.

WAYB allows LATCH installation in the center seating position if the vehicle manufacturer allows it and the LATCH anchor bars are spaced 11-20” apart. Check your vehicle owner’s manual to see if there are allowances for anchor spacing other than 11-20″.

WAYB has determined that the Pico CANNOT be installed with any inflatable seat belts found in vehicles. 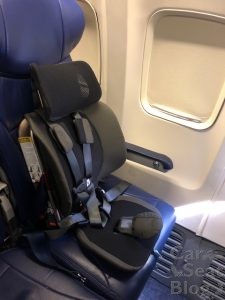 I’m sad to say that I neither have an airplane, nor the money to take a trip just to try this seat, though I did consider it. Fortunately, I have family who has the means and energy and a 3 year old! My sister used the Pico on a recent trip with my nephew Asher. Asher is 3 years old, 35 pounds and 39 inches. My sister was easily able to transport the seat through the airport and install it on the plane without a seatbelt extender. At WAYB’s recommendation, she threaded the seatbelt through the guides before buckling, then buckled and tightened. 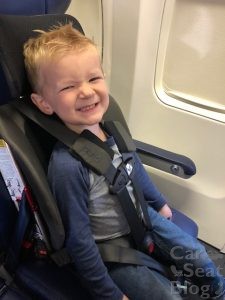 Though the buckle was right in the middle of the seatback, because the mesh seat is reasonably taught, Asher couldn’t compress the seat enough to make contact with the buckle. The design was really, really thoughtful and I am mostly just mad I have installed so many harder seats on airplanes than this one. Where have you been all my life, Pico? And yes, Asher’s chest clip could be moved up a touch. I told you it was tricky to place correctly and unlike when I tossed my kids into my car, I couldn’t just bump his clip up and retake the picture because, well, I wasn’t there. So heed a warning here and be mindful of this.

Since the Pico sits so low on the airplane seat, the tray table can be lowered for the child to use during the flight.

WAYB goes by NHTSA standards for replacement following a crash, and it is well described in the manual.

The Pico is covered by a 3 year (!) limited warranty from day of purchase, which is pretty great. The seat itself has a 6 year lifespan from date of manufacture, but Pico’s advocate told me that they intend to monitor this and decide whether to extend the lifespan as they are able to test the seat as it ages. Because it’s brand new, they aren’t sure how the materials will age and their goal is to make sure that it can be used as long as is safe to do so. 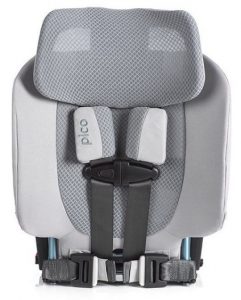 I feel like travel seats are an area where many companies have tried to make their seats work, but the reality is that conventional car seats just aren’t travel seats. WAYB did the opposite: they strayed from convention, focused on travel and portability and they really knocked it out of the park. The WAYB Pico does everything it promises to do, and it does it with genius design and eco-friendly materials. If you’re looking for a car seat for travel or a tight three across, or both, look no further. It’s an expensive seat, but it is a niche seat using state of the art materials. The Pico is the seat you’ve dreamed of every time you’ve sat down sweaty from the car seat hustle on an airplane. It’s the seat you’ve wished you had in every Uber ride with kids (or in every Uber ride you skipped because of kids). It’s the seat you wanted when you had to rent one through your car rental place. If you have a kid in the size and age range covered by Pico and intend to travel, run, don’t walk, and get one. You won’t regret it.

Thank you to WAYB for the sample Pico used in this review. No other compensation was provided. All opinions expressed are those of CarseatBlog.  More information at their official website: WAYB.com.