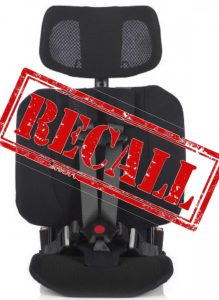 The National Highway Traffic Safety Administration has announced a recall of more than 4,500 WAYB Pico car seats because the headrest can potentially detach, leading to an increased risk of injury in a crash.

WAYB has received 11 reports of headrests that have detached from their carseats. The problem seems to be that in WAYB’s original design, a 2-pin system holding the headrest can fail. No injuries have been reported.

Defect: The headrest can detach from the carseat.

Seats recalled: All seats manufactured between 3/1/2019 and 5/12/2019. After that time, WAYB began using a new design with a 1-pin system and a reinforced headrest.

Remedy: WAYB plans to replace the headrest on recalled seats, but as of this writing, the details of this plan have not been released. We will update with more information when it becomes available.

This makes it sound like a broken headrest might not be immediately noticeable to the consumer. Because of this, CarseatBlog recommends that owners of affected models contact WAYB at help@wayb.com or text or call them at 888.924.9292 if you have any concerns prior to receiving additional information from WAYB on the recall.  If you are still concerned, you should discontinue use of an affected Pico carseat until the headrest is fixed.

We will continue to update this report as more information becomes available.

Headrest May Break or Separate From Car Seat A broken or separated headrest increases the risk of injury during a crash.

The manufacturer is still developing a plan to replace the headrests on the affected seats, free of charge. The recall is expected to begin September 30, 2019. Owners may contact WAYB customer service at 1-888-924-9292.