The Safest Infant Carseats:  Best, Better or Basic?  How do infant seats compare?

Today, Consumer Reports released their second round of infant carseat ratings using their new test methodology for evaluating infant child safety seats. We feel these ratings are likely to be a big step forward and should help parents to compare the crash safety of carseats. In the long term, just like the 5-star rating system from NHTSA and the IIHS Top Safety Pick ratings for automobiles, more rigorous testing often leads to better product designs in the future.

Why did Consumer Reports create their own crash test for child restraints?

Consumer Reports wanted to provide consumers with comparative information on carseats. By developing their own crash test, the goal was to determine which carseats offered an extra margin of safety in certain crash conditions simulated by the new tests. We know all carseats sold in the U.S. should meet federal safety standards but we also know all carseats aren’t the same. The goal here was to determine which seats could hold up well even under tougher crash test conditions that were also more “real world” than the current tests.

How is this test different from the government’s FMVSS 213 crash test?

The Consumer Reports crash test was developed to be more rigorous than the current federal safety standards. They also designed the test with more real world vehicle conditions in mind. This new test is performed at an independent, outside testing facility. It uses a contemporary vehicle seat with a lap/shoulder seatbelt and a floor below it, unlike the government’s FMVSS 213 crash test which has a 70’s era back seat test bench with lap-only seatbelts and no floor. There is also a “blocker plate” installed in front of the test seat to simulate the interaction that occurs between the carseat and the front seat in a real crash. This is important because in the real world we know children are often injured when they come into contact with the back of the front seat during a crash. Consumer Reports also chose to run their tests at 35 mph; the government’s crash test is 30 mph. 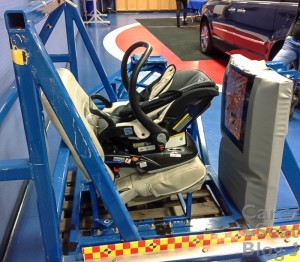 What is the rating scale?

The crash protection ratings will indicate a “BASIC,” “BETTER,” or “BEST” score for crash protection. The rating is based on a combination of injury measures. While we don’t know exactly where they drew the line between best and better, we do know that seats receiving a “best” rating for crash protection performed statistically better than other peer models for crash performance.

A seat can be downgraded to a “basic” rating if there are repeatable structural integrity issues or if the dummy records injury measures that are considerably higher than the other peer models tested. Seats with a “basic” rating are still considered safe to use because they do meet all the safety standards in FMVSS 213. Please try to keep in mind that these are VERY challenging new tests and there will always be some designs that outperform others.

CR also gives each seat a separate overall numeric score which is based on its crash protection rating and other factors like ease of installation with seatbelt or lower LATCH anchors and ease of use. Seats with high overall scores will have a “better” or “best” crash protection rating plus they are considered easy to install properly and easy to use correctly.

Below we have listed the crash protection rating for the infant seats that received either a “Best” or a “Basic” rating for crash protection.  If you want to see the full ratings for all the seats they tested, which include 22 additional models in the “Better” rating category (plus all the overall numeric scores and comments), they are available only to subscribers. An annual online subscription to ConsumerReports.org is $26. 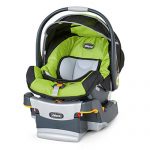 Not surprisingly, their top overall performers (combination of crash protection plus ease of installation and ease of use) are the Chicco KeyFit & Chicco KeyFit 30 models, which are also on our list of Recommended Carseats. 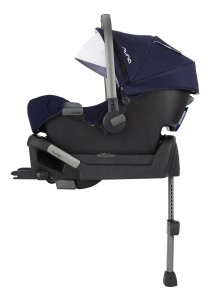 We note that the Asana 35 DLX , Cybex Aton 2, Cybex Aton Q, & Nuna Pipa were all tested using their load leg feature. Thanks to the load leg, these seats were all top performers in crash protection. Unfortunately, a load leg cannot be used on the government’s FMVSS 213 crash test sled, as that sled does not have a floor.

Below is a table of the infant carseat models which received a “Best” rating for crash protection, as well as those that only received a “Basic” rating. The seats are listed alphabetically and grouped within their rating category.  We only list the new Crash Protection ratings.  The overall score, other ratings and summary reviews are available at Consumer Reports.

Why are the full ratings available only to Consumer Reports subscribers?

CR is an independent, non-profit consumer group that doesn’t accept advertising or corporate donations. They purchase the carseats from retailers and they don’t accept free samples from manufacturers. Consumer Reports has a business model just like every other business that hopes to stay in business. Therefore, the full ratings and reviews are available only to subscribers. It’s how they stay in business. For online subscribers, an annual subscription to ConsumerReports.org is just $26.