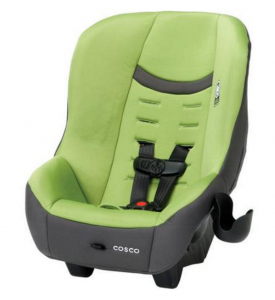 What’s not to love about the Scenera NEXT? The cute little carseat with over a dozen covers from which to choose that’s lighter than some rear-facing only infant seats, has a mandatory rear-facing to age 2 limit, and is one of the most inexpensive carseats on the market as well at about $45. It’s almost too good to be true, but that’s what Cosco set out to make and they accomplished it and more. It’s also our budget convertible carseat entry for our Recommended Carseats list.

Installation is a dream. The NEXT is designed to install very easily because it’s a seat that will be commonly popped in and out of vehicles. Use either the lower LATCH connectors or the seat belt—it doesn’t matter since they’re both easy. Just don’t use them at the same time! You’ll notice on the bottom of the rails of the seat there are round rubber plugs. These little additions do miraculous grippy things to the installation and make it so the NEXT doesn’t slide when installed. 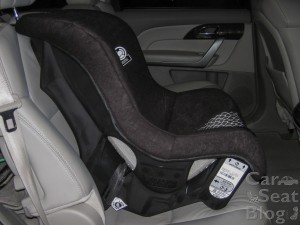 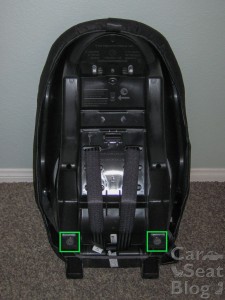 For a newborn or young baby, make sure the NEXT is reclined to the proper angle as designated on the line on the side of the carseat between the rear-facing and forward-facing belt paths. When your child is older, he can be more upright and the manual even says that. 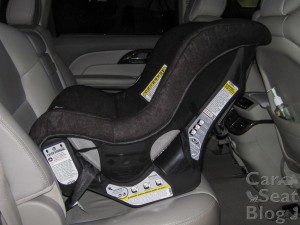 Forward-facing LATCH weight limit: 40 lbs., which is the maximum weight limit of the harness

Cosco allows LATCH installation in the center seating position if the vehicle manufacturer allows it and the LATCH anchor bars are spaced at least 11” apart.

Cosco has determined that the Scenera NEXT cannot be installed with inflatable seat belts found in some Ford, Lincoln, and Mercedes vehicles, and in some airplane seat belts.

The Scenera NEXT is designed to fit children from 5-40 lbs. and the fit on the lower end is fantastic. When it was originally released, it shipped with a short crotch strap, which was perfect for newborns, but for older kids, it really was too short. If you have an older model, you can easily get a free, longer crotch strap from Cosco. Just give them a call or email them to request it. Since August, 2015, the Scenera NEXT automatically ships with the new longer crotch strap so you don’t have to do anything but enjoy your cute seat. My new longer crotch strap is in the mail to me right now and as soon as I get it, I’ll update the review with comparison pics. 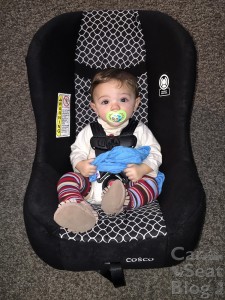 The designers of the NEXT designed the carseat to really be a rear-facing seat that can be used forward-facing sometimes. It’s an interesting concept for a convertible carseat. Many kids who fit rear-facing in it won’t fit forward-facing because once it’s turned forward, it sits more upright making the child fit taller in the seat. 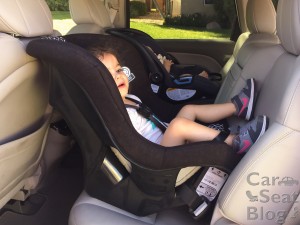 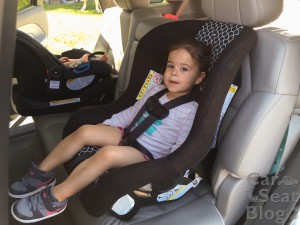 The cover is relatively easy to remove. It can be washed in the washing machine and dried in the dryer. To clean the harness, wipe with a sudsy washcloth and wipe off with a wash cloth that has water on it only to remove all the soap.

The NEXT is FAA-approved and will make a great seat for flying because carseats don’t get any lighter than this one for dragging through the airport. It’ll fit great rear-facing on the plane too.

The Scenera NEXT has a lifespan of 8 years and Cosco wants you to replace it after any crash.

Thank you to Cosco for providing the Cosco Scenera NEXT used for this review. No other compensation was provided. All opinions expressed are those of CarseatBlog.