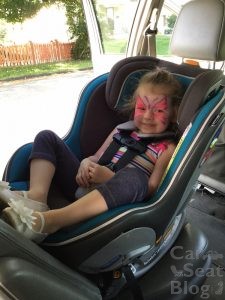 It’s all the rage among parents nowadays: extended rear-facing. If you’re turning your child to face forward before they’ve reached the limits of their carseat, then you’re old-schooling it and increasing your child’s risk of injury in a crash. Many pediatricians still hold onto the now ancient recommendation of turning kids forward-facing at age 1 and 20 lbs., even though their own professional organization, the American Academy of Pediatrics, hasn’t recommended that since before 2002. You were probably in grade school then.

Why is it so critical for kids to stay rear-facing?

When you use the carseat right, it protects them and you from potentially being forever changed if you get into a crash.

A carseat will always move toward the point of impact (Newton’s 1st Law). In a frontal collision—at 53.5%, statistically the most common type of severe/fatal crash—the entire back of a rear-facing carseat will protect the head, neck, and spine of a child as it rotates down toward the front of the vehicle. Even in a side impact, which is a more serious type of crash due to its proximity to passengers, there is usually an element of frontal movement, such as a vehicle moving forward through an intersection, as it’s hit from the side. So a rear-facing carseat will rotate down and forward, then toward the side where the impact occurs.

The folklore is that a child’s neck muscles aren’t developed enough to keep a baby’s neck safe in a car crash, which is why they have to face the rear of the vehicle. I suppose that’s true in a way: it does take babies time to develop their musculature so they can hold their heads up to keep their airways open. But the muscles don’t protect the fragile spinal cord, which is the bundle of nerve fibers that forms the central nervous system and is connected to the brainstem. No amount of baby push-ups will strengthen your child’s muscles to the point of protecting his spinal cord.

The bones of the spinal column are what actually protect the spinal cord and in infants and young children; they aren’t completely fused together for years. One of the most important cervical bones, the Atlas (C1), is what attaches the head to the spinal column. Drawings show where it ossifies, or fuses, at varying times: the anterior arch fuses around age 7, while the posterior neural arches fuse around age 3. Before it fuses, the Atlas and Axis (C2), the 2nd vertebra that the Atlas nestles into, are made of bone and cartilage, which is very pliable. These two vertebrae are held in place by ligaments, which are very elastic (lax) to allow the child to grow. 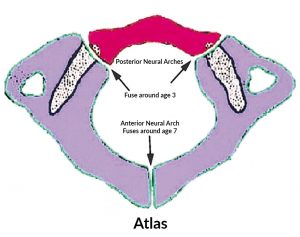 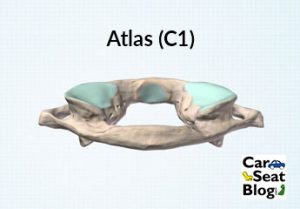 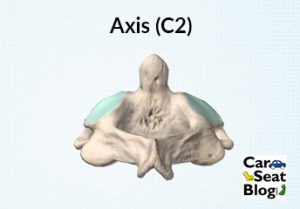 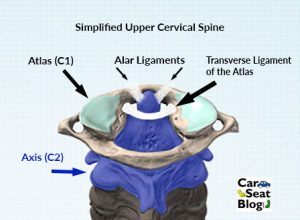 Studies of infant cadavers have shown that vertebral columns can stretch up to 2” but that the spinal cord is damaged after only ¼”. Given that a baby’s head accounts for ¼ of its total body size versus 1/7 an adult’s size, plus the immaturity of its vertebrae and laxity of the ligaments holding those vertebrae together, rear-facing seems the obvious choice.

The child’s large head shifts the fulcrum of movement—where the head swings forward—higher, elongating the spinal column and potentially causing catastrophic damage to the spinal cord. Before age 8, this fulcrum is in the upper cervical spine, at C2-C3. After age 8, the fulcrum shifts down to C5-C6, where it stays into adulthood. When you hear the term “internal decapitation,” it encompasses this movement of the upper cervical spine since the head swinging forward must happen in order for the ligaments to stretch and pull the head from the Atlas.

Another devastating injury that doesn’t show up on x-ray is called Spinal Cord Injury without Radiographic Abnormality (SCIWORA). This is when the spinal cord stretches because of the elasticity of the ligaments and cartilage in the spinal column. An x-ray will show normal bone alignment and no fractures, but the spinal cord may be irreversibly damaged. Remember that this bundle of fibers can only stretch up to ¼” before having catastrophic damage.

The evidence is clear. Rear-facing carseats protect the most fragile part of a developing child’s body: the head and spinal column. The 2018 American Academy of Pediatrics Policy Statement recommends rear-facing to the weight or height limits of the child’s carseat and instructs their pediatricians to counsel parents about rear-facing at each health visit. The National Highway Traffic Safety Administration (NHTSA) recommends rear-facing  as long as possible.

The American Academy of Pediatrics (AAP) has recommended since 2002 that after age 1 and 20 lbs., children should ride in a rear-facing convertible seat until reaching the weight limit of that carseat. They amended that policy in August 2018 to recommend rear-facing to the weight or height limits of the carseat.

Note how the legs fly away from the back of the vehicle seat during the rear-facing test on the left. In the forward-facing seat, the properly secured dummy bends nearly in half during the crash test.  Photo courtesy Kathy Weber, ret., UMTRI, and SafetyBeltSafe USA.

Here’s an article showing why .*  (Rear-Facing Car Safety Seats Getting the Message Right)

*It has recently been discovered that the data was misinterpreted in this study and that the “5 times safer” statistic was over-inflated. CarseatBlog supports the new AAP guidelines of rear-facing as long as possible, up to the limits of their car safety seat. This will include virtually all children under 2 years of age and most children up to age 4.

SafetyBeltSafe USA’s opinion on how long children should ride rear-facing. (How Long Should Children Ride Facing the Back of the Car?)

After reviewing studies from the U.S. and Sweden, a study published in the highly regarded British Medical Journal advises keeping children rear-facing until age 4.  (www.bmj.com/cgi/content/full/338/jun11_2/b1994?view=long&pmid=19520728)

A tightly installed rear-facing carseat allows the vehicle and carseat to absorb crash forces and increases “ride down,” the amount of time it takes a body to come to a stop in a crash. The longer the ride down time, the less chance of injury.  (http://www.car-safety.org/rearface.html)

Since there is almost always an element of forward motion in a side impact—such as when a vehicle is going straight through an intersection when it is struck on the side by a red-light runner—a rear-facing seat does a better job of keeping a child’s head contained within the safety of the seat. (http://carseatsite.com/whyrearfacing)

Infants and young toddlers have spines made of soft bone and cartilage that doesn’t begin to harden until around age 3. As a result, the spinal column can stretch up to 2 inches; however, the spinal cord will rupture after being stretched after only ¼ inch. This damage cannot be repaired.  (http://www.carseat.org/Technical/tech_update.htm#rearfacFF)

Evenflo is now requiring that children be age 2 before forward-facing in their convertible and combination carseats.

Approximately 75% of kids in Sweden rear-face until at least age 4. From 1999-2006, only 4 rear-facing children under age 4 were killed in crashes and their deaths were due to circumstances unrelated to the direction the carseat was facing (fire, drowning, excessive intrusion). During that same timeframe, 6 kids under age 4 facing forward in booster seats were killed; 3 of these crashes were potentially survivable crashes had the children been in rear-facing carseats.  (http://www.bmj.com/cgi/content/full/338/jun11_2/b1994)

Anecdotal evidence suggests that infants around ages 10 mos.-18 mos. enter a fussy stage that makes it difficult to put them into any carseat, rear- or forward-facing. Many parents prematurely switch the rear-facing carseat forward-facing thinking that the child is objecting to riding rear-facing, when the child is objecting to being restrained at all. Visit the Car Seat Safety forums at www.car-seat.org and you’ll hear from other experienced parents regarding this phase.

The above video shows how the dummy stays contained in the seat during a rear-facing crash test. The tape on the dummy’s head is for measurement and doesn’t affect its head during the test.

This video is the companion video to the one above and shows a side view of the crash test. Note how little the head moves.

The above video shows a properly installed forward-facing seat. Note the seat belt stretch and how far forward the dummy bends.

The above video from Norway shows the differences between rear- and forward-facing carseats in an animated crash.

The above video from the Buckle Up Brutus at Ohio State University demonstrates the difference between rear-facing and forward-facing in crash tests.

If you need more convincing, take it from Dr. Marilyn Bull, a noted pediatrician from one of the country’s best pediatric hospitals, Riley Children’s Hospital in Indiana. This video was produced for, and used in, the current Child Passenger Safety Technician course though Dr. Bull discusses rear-facing using information from the now incorrect “5 times safer” article.

Vehicle crashes are the number 1 killer of children.  Protect your children to the best of your ability.  Follow best practice.