I have a confession to make: I use my cell phone in the car.

Before you jump on me, though, I use it in place of a navigation system. I don’t play Candy Crush while I’m driving.

The problem I’ve had, though, is finding a good way to mount my phone so I can glance over at the map. Until recently, I’ve had to keep my phone in a console down low under the dash board, meaning I’d either have to grope around and raise the phone up when I needed to see it, or I’d have to glance very far down, without even my peripheral vision on the road. Not safe.

I’ve tried a couple cellphone mounts before, the kind that stick to my windshield with a suction cup, and then have a clamp to put the phone in. I found the suction cups fell off a lot, and it was a pain to get the phone in and out of the clamp.

Then I found the SCOSCHE MagicMount system. There are various mounts available, but they all contain a powerful magnet that clings to a metal plate you stick onto your phone or set inside of your case. This means that the phone can be put on or taken off the mount in a split second.

I chose the dashboard mount, which sticks onto the car with powerful 3M adhesive. The nice thing about this mount is that it can be placed on a horizontal or vertical surface, or even a curved surface. The face of the mount can swivel in any direction, meaning you can place it pretty much wherever you need it. There are also mounts that use the suction cup, a gooseneck that sits in a power outlet, and one that clips to a vent.

Each mount comes with two adhesive metal plates about the thickness of a business card. The small plate can adhere directly to the back of a phone or phone case. Or, if you’re like me and aren’t thrilled with the idea of sticking something to your phone, you can simply place the larger plate (without removing the cover from the adhesive side) between your phone and its case. I worried it might not be strong enough, but it’s worked perfectly on my CandyShell case and my husband’s Otterbox. 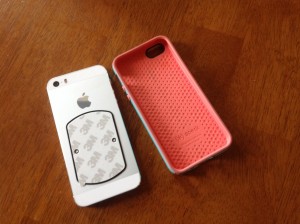 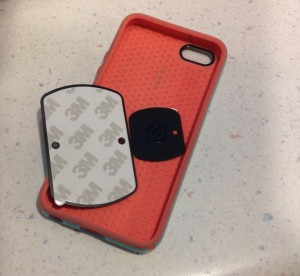 Since I needed two of the large plates (one for my phone and one for my husband’s), I ordered a replacement kit, which comes with a small and large plate for the phone, a mini-size metal plate for any other small object you might want to display, plus extra 3M adhesive for the mount. All together, the original mount and replacement kit were less than $30. Once we figured out where we wanted to stick the mount, we were installed and ready to go in minutes.

We’ve been using the MagicMount for several weeks now, and I still get a little nerdy thrill each time I pop my phone onto the mount. It’s just so easy! It’s also nice that if you’d prefer a landscape view, you can just turn your phone before sticking it on—no adjustments necessary. 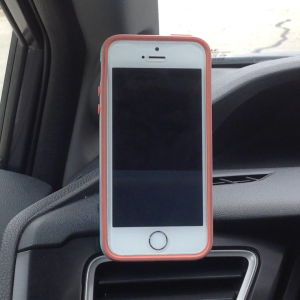 Here’s a video showing how easy the mount is to use:

There is one important warning: Because the mount uses a strong magnet, you shouldn’t use it if your phone case also holds credit cards. It’s fine for smart phones, though, and since the metal plate you put on the phone isn’t magnetic itself, you don’t need to worry about it co-mingling with credit cards in your purse or pocket.

Now, readers of this blog probably have two main concerns with this product, and I’ll address them.

Yes, in a crash, the mount and/or phone could theoretically come off. That could happen with any mount, though. I’m not sure if it’s more or less likely with this one, but so far this one hasn’t fallen off at all, which is more than I can say for my previous clamp-style suction-cup mount, or the suction cup that holds our Garmin unit in our other vehicle.

And I have another confession: My car is not otherwise free of projectiles. I try not to keep excess stuff in there, but at any given time, we have water bottles and travel mugs in the cup holders, and my kids usually have books, toys, or tablets to keep them entertained. My phone would be somewhere in the car anyway.

Sure, it can be, but it doesn’t have to be. Like I said, I’m not texting or watching movies on it. I have a map displayed, which is no different than a display on a car’s built-in screen or a stand-alone navigation unit (except that it’s better positioned, in my opinion). Can I guarantee that other people won’t misuse it? No, just like I can’t guarantee they won’t misuse any other mount, or skip the mount all together and text away while driving. Anything has the chance to be misused–it depends on the person using it.

I can’t say how well this device will hold up over time, but so far I’m loving it.

CarseatBlog was not compensated in any way for this review, not even with samples. I spent my own money, and I’d do it again…and probably will when it comes time for holiday shopping. I’ll give the gift of magnets. The SCOSCHE MagicMount system used in this review can be found for under $20 at Amazon.