In Part I of my review of the 2011 Honda Odyssey, I covered the child seating and safety aspects of this new minivan pretty extensively.  This part will touch on some of the performance, electronics and luxury features.  Most of these aspects will be thoroughly discussed in mainstream media reviews and on other websites and blogs, so no need to go into boring specifications, tables and numbers.

I’ll also discuss my trip to the lovely Estancia resort in La Jolla, California, where I was able to preview the new Odyssey along with bloggers from various other parenting and mommy-centric websites.  My trip started on a Thursday evening with a “business elegant” dinner in a conference room where the new Odysseys were on display.  About 20 mommy-bloggers and I were present at this event.  Mainstream media attended the previous day, followed by international media the following day.

On Friday, we started with a multimedia presentation and Q&A session on the new Odyssey.  We then paired up and were given directions for an extended test drive around San Diego, ending at Qualcomm Stadium.  I partnered with Kacy, from Every Day I Write the Book and Design Mom.  Instead of following the rest of the crew immediately onto the drive route, we hung back a bit to take care of the most important aspect of a nice drive in the country.

Once we arrived at Qualcomm, we had a late lunch followed by runs through two courses that highlighted the performance and safety of the new Odyssey.  Accompanied by a professional driver who ran us through the course, we were then able to take the wheel and put the Odyssey to its performance and handling limits.  I took a second shot on that course but still got nowhere near the time of the pros.  In the next course, we tested the turning radius, emergency handling, braking, parking (using backup camera guidance) and other features.  We also had more time to play with the interior features.

So, what’s to like?  Like I said, I won’t bore you with all the technical details.  You will find that elsewhere described much better than I can do.  Here’s what I think the 2011 Odyssey’s got goin’ on:

Dislikes?  Compared to my 2006 Odyssey, only a few mostly minor ones, beyond the omission of some safety features in low trim levels, as I noted in Part I –

All in all, I think Honda engineers and designers really did their homework!  The 2011 Odyssey is a nice improvement in almost every way over the previous Odyssey.  It should definitely make current minivan buyers interested, as it really does stand out from the rest of the minivans on the market.  Heck, the 2011 Odyssey might even make a few current Odyssey owners envious!  It should make some non-minivan buyers take notice, too!  Unless you frequently tow over 3500 pounds (max for the Odyssey with the optional tow package), why would you pay as much or more for a big 3-row SUV that falls well short of the Odyssey in performance, convenience, fuel economy, safety, styling and available luxury features?  Just to get rid of the minivan-calling-card sliding doors so the kids can put dents into your other car in the garage or someone else’s car in the parking lot?  Seriously, dude.

Would I buy one?  The 2011 Honda Odyssey would definitely be a top consideration for me, if I was buying a minivan.  I only hold back a resounding “Yes!” until those crash testing results appear, even though Honda’s crash testing history with their light trucks is exceptional.  Like many consumers, what I really want is a hybrid, clean [turbo] diesel or alternative fuel vehicle.  The Odyssey offers none of those.  We were told that weight and cost make it difficult to produce a hybrid minivan.  I disagree.  I think there are plenty of families willing to spend the extra money for significantly improved fuel economy in order to reduce both pollution and dependence on non-renewable resources, especially if they don’t have to buy a Touring trim to get it.  Models like the GM full size SUVs and the Toyota Highlander Hybrid prove that this can be done with relatively good results on vehicles heavier and less aerodynamic than the Odyssey.  Granted, I don’t think anyone else has produced a hybrid or clean diesel van (other than perhaps the full size Mercedes Sprinter BlueTec), so I may well be wrong about the potential market.

Sticker pricing starts at $27.8k for the Odyssey LX all the way up to a whopping $43K for the Touring Elite.  Even the nicely equipped EX trim tops 30 thousand, coming in at $30,950.  Of course, street prices will be lower.  You can find those at websites like CarsDirect.com

Who knows, maybe Honda will make me an offer I can’t refuse to stay in an Odyssey!  For full disclosure, I am a current Odyssey owner.  I own a 2006 EX-L and owned a 2001 LX prior to that.  The new Odyssey seems like a very nice improvement, but so are new models from the competition.  There are a lot of very safe and refined minivans on the road today and it’s hard to go wrong with a number of them.  The new Toyota Sienna we reviewed is a solid competitor and I understand the Chrysler vans are getting a nice refresh this year and the new Nissan Quest is to be introduced soon, also.  In case my review sounds like a Honda infomercial (okay so Part I really did sound like an infomercial!), we do hope to balance it and obtain a review model for a longer term with a second opinion from a mom who doesn’t currently have a Honda minivan.  Can’t blame me for going a little overboard about the safety features, though I think I’ve offered a little more criticism than most reviews I’ve seen so far!

And last but not least, those of you who actually read all of Part I to the end might be wondering about my little brush with the law.  In an effort to set myself apart from the 20 moms test driving that day, I decided to take the advice that one of the valets gave to Kacy: burn some rubber.

Okay, I know.  Epic Fail.  In my defense, I did manage to demonstrate some manliness by burning rubber a little later, after I remembered to turn off traction control, found a nice stop sign on a little uphill incline and revved up the motor just before letting off the brake.  No, you shouldn’t try this at home.  It attracts certain attention from law enforcement professionals… 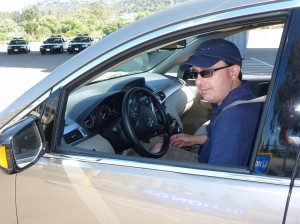 Disclaimer: Travel expenses to the media launch event were provided by Honda.  No payment or other incentive was issued by Honda or any other entity for this review. Thank you to Honda and all those present for a fantastic event!  Some photo/video above provided by Honda.  You can tell which ones;-)  Also, please check out some other blogger reviews from the moms who attended the launch event with me.  You may find you share a lot more in common with these moms than with many mainstream auto reviewers!