Home  »  Uncategorized   »   The Safest AND Most Flexible Family Vehicle? 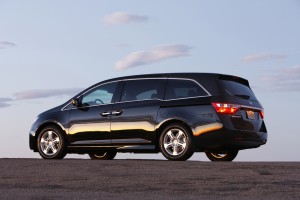 We’ve already covered the new 2011 Honda Odyssey quite extensively in Part I and Part II of my preview and also in Kecia’s review.  With the amazingly flexible 8-passenger seating and great cargo space, it is arguably the best family hauler around, especially for larger families with lots of small kids!

But what about safety?  We didn’t know much at the time of our reviews, other than the great history of top crash results Honda has had with the 2nd and 3rd generation Odyssey.  Well, now we know a bit more about the new 2011 Odyssey in terms of crashworthiness, and the results are outstanding.  First, the Odyssey is one of the few vehicles so far to get an overall 5-star rating in the new 2011 NHTSA crash testing system.  In fact, it received a perfect 5-stars in all five crash tests (Frontal Driver and Passenger, Side Front Seat Male, Reat Seat Female and the new Side Impact Pole Test).  As of today, no other SUV or van has managed this feat of crash safety! It received 4-stars in the rollover rating (not an actual crash test).  In fact, only one other vehicle in the 2011 NHTSA crash test database can match this result as of today, the 2011 Chevy Cruze.

The good news doesn’t stop there.  The IIHS has given the 2011 Odyssey it’s top “Good” result in their frontal offset crash test, their side impact test and in their ratings for seat geometry and head restraints (not an actual crash test).  The only thing keeping the 2011 Odyssey from a “Top Safety Pick” for 2011 is that it has not yet been tested for roof crush strength.  A good result there and the Odyssey will be one of a very exclusive group of vehicles to be an “IIHS Top Safety Pick” AND have a 5-star overall NHTSA rating.

Even so, 5-star NHTSA crash results across the board are impressive, especially in the new testing that is more difficult than the tests done in 2010 and earlier.  Kecia has a blog with more on that topic.  To combine that with Good results in the two IIHS crash tests is a very impressive accomplishment  indeed; one that will set the standard for crash test safety for family vehicles.  I have been considering switching from my 2006 Honda Odyssey to an SUV, but these results might make me reconsider!  If only I could get the fuel economy of the Touring models for the price of an EX, or better yet, a hybrid!

Editors Note: The 2011 Odyssey did later receive an IIHS “Top Safety Pick” award, after its result in the roof crush test was one of the best results ever.  With solid performance for crash avoidance and excellent crashworthiness, the Odyssey has a genuine claim to being one of the safest passenger vehicles on the road today!