Let’s face it, kids are honest. To a fault at times. We’ve all had the embarrassing moments  where we want to disappear.

One of Liam’s latest gems involves movies.  I rented Neighbors on the RedBox last week and Liam asked if he could watch it. I told him no, because it was a movie for adults. He asked why, and I said because it had stuff not appropriate for kids. He said, “Oh, like not pooping in toilets? That’s inappropriate and so is talking about poop”. I just ignored it while he cracked himself up. Fast forward to later that day, we were in Target and he points out some cardboard cut out with a Frozen movie character. The employee standing nearby goes, “Oh, are you a big Frozen fan?” Liam says, “Well, I like Toy Story better but my mom doesn’t like Frozen. She only likes adult movies where they poop everywhere.”

1) Forgetting all your kid’s basic info. I wrote down my birthday instead of Liam’s on his preschool paperwork. To be fair, we have the same date, but I put 1985 instead of 2010. So for awhile, they had a 28 (at the time) year old preschooler. At least by 28 you can wipe your own bottom, right? Then, to add insult to injury, I was asked when Declan’s birthday was and I was off by 3 days. Oops.

2) Forgetting your kid altogether. Do you know how many times I’ve run errands with just the baby while Liam was in school and when I turned around to back out the parking space, saw his empty car seat and had a brief moment of panic that I left him inside Target somewhere? More times than I’m going to admit on this public blog, that’s for sure.

3) The awkward drop off. You know, the kind where you are straggling in 15 minutes late. The baby is in pajamas, your jeans are from yesterday (and the day before? Shhhh!!!) and have dried yogurt on the leg, the other kid has a permanent scowl on his face because he couldn’t finish playing before it was time to leave, you say hi to people without actually looking them in the eye because you’re trying to stay awake. Yeah. Actually, we aren’t rude or homeless. Just perpetually late. There is no way we are going to make the 7:15am drop off for kindy next year.

4) Not knowing anyone’s name. It’s bad, really bad. Everyone is Susie’s mom or John’s dad. Even as the contact in your phone. Maybe it’s just me being terrible with names but I’m hoping I’m not the only one. Then, you pass the timeframe where it’s still appropriate to ask what their name is. When you’ve been to the park multiple times and chatted for awhile and know the names and ages of all each other’s kids..yeah, it’s too late. Your time has passed. You are going to still be friends with them 5 years later and there’s going to come a time where they will catch you trying to sneak a look at the pile of mail on their counter, desperately trying to see what their name is. Explain that one. That’s right, you can’t. So don’t let the time frame pass you!

5) The Michael Jackson. I’m going to go out on a limb here and say pretty much all kids have gone through this, but moms of boys will probably understand better. All the kids are standing together nicely doing what they’re supposed to be doing, and there’s yours absent mindedly grabbing his crotch like it’s covered in ants. I gave up worrying about it awhile ago but there is something fairly awkward about introducing yourself to another mom, “Hi! I’m Alicia. My son is Liam…he’s that one over there. Yes, the one in the dinosaur shirt scratching his behind while trying to lick his own nose.” Classic.

I guess all we can do is write it all down, then give it to them later in life. So they can say, “Thanks mom. Thanks for dragging your sleep deprived, sour yogurt wearing butt to school so you can talk to nameless people while I go against social decency. I’m a happy, functioning adult now that no longer grabs himself in public. I love you!” 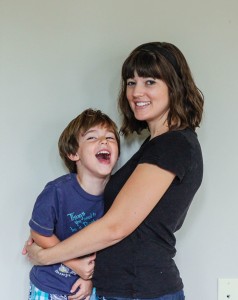 Yes, I have the kid that won’t even stop being wild for a 2 second photo.