2017 Review of an Illegal Chinese Car Seat: They’re Still Around 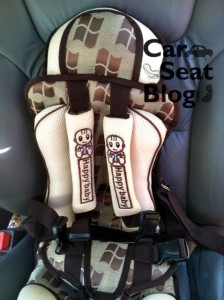 What would you say if I told you there’s a car seat good from age 6 months to 8 years, weighs less than two pounds, and can easily fit into any backpack? Oh, and it costs a mere $31. Does that sound too good to be true?
Well, yes. Yes, it does. And when something sounds too good to be true, it usually is.

Now and then someone will post on the car-seat.org forums about questionable foreign seats (usually sold on ebay) that don’t meet US safety standards… or any standards for that matter. The typical (and correct) response is to say that they’re dangerous and illegal and to stay away.

Although I’d never use it, I’ve always been tempted to purchase one of these seats, just because. A few years ago, an American company called Grandma Knows was marketing a horribly unsafe-looking sling-like seat that I tried to buy, but by the time I called, armed federal officials had broken into their warehouse in the dark of night and had seized all their merchandise. Or at least that’s what I envision having happened. In reality Grandma Knows probably received nothing more than a harshly worded letter from NHTSA. In any case, I didn’t get one of the seats.

So the other day, when a Chinese seat that clearly doesn’t meet federal safety standards became available on Amazon—a mainstream US retailer—I knew I had to act fast. At just $30.99, how could I pass up such a bargain? Plus my Amazon Prime membership made shipping fast and free. With just one click, my illegal foreign seat was on its way!

A few days later a lightweight package arrived at my door. Inside was the seat, complete with “instruction manual.” That term is in quotes because it wasn’t a manual at all; just the one-sided cardstock product description written in broken English. But it was enough to go on. 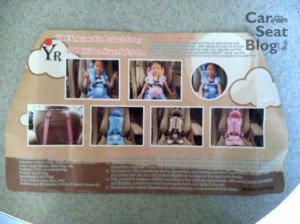 The product name on Amazon.com was “Cosmos 5 Point Harness Child Booster Car Seat” (plus Free Cosmos Cable Tie!) but the item I received didn’t have the name Cosmos anywhere. This one is called YIREN Automobile Product Series -2109 Children Straps Safety Seat.” Likely it is sold/distributed under some other names as well.

The fashion I got is “Coffee Color,” though it would be more accurately described as “Microsoft Windows Brown.” 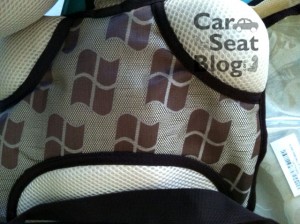 The seat is nicely padded, including the large “abdominal pad” that “can not only protect but also lets the legs move freely.” 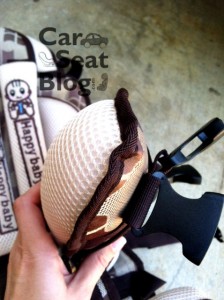 After thoroughly reading over the paragraph of installation instructions, it was time to take it to the car. The instructions say that “fixing onto the assistant’s seat is preferred.” Based on that and the accompanying photos, I think they mean you’re supposed to put it on the front passenger seat. Sure, why not?

It wasn’t entirely clear how I was supposed to attach the straps, but I assumed they were to go into the seat bight, then up through the metal loops, so that’s what I did. 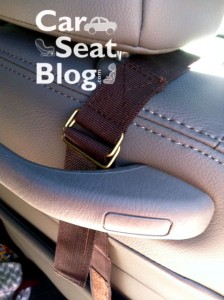 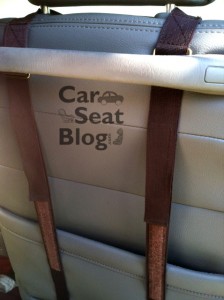 Next, “After asking the baby to sit down according to the picture, buckle the snap ring, regulate well the elasticity of the shoulder protector and waist protector.”

So I asked my daughter to sit down, buckled, and pulled the straps tight until she was “well regulated.” 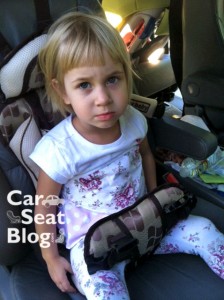 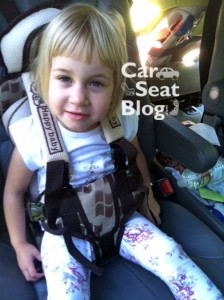 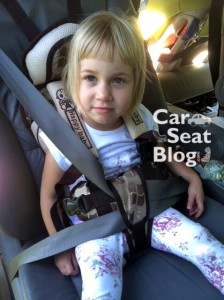 Lastly, I was instructed to put the seatbelt through the front of the seat. Now, that step is one that I hadn’t seen pictured before, and did make the the product just slightly less horrendous. I say slightly less horrendous, because it’s still awful. Remember, the lap belt sits in front of the large “abdominal pad,” which will surely compress in a crash. The shoulder belt comes nowhere near touching my child’s shoulder, meaning that in a crash, her upper body would be supported by nothing stronger than a stroller-strap… if that.

I would bet that in an actual crash, the child’s upper body would fly free of the harness, and I wouldn’t be surprised if the child flew out of the restraint entirely, right up over the lap belt.

Because the product is “rated” for use from 6 months (providing the child can sit), I had to try my 10-month-old in it. Doesn’t he look safe? (Answer: No.) 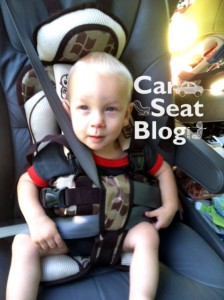 The instructions didn’t say anything about locking the seatbelt, so I didn’t. I bet if I gave him 10 minutes in there, he would have found a way to wriggle free. Maybe that’s one of the reasons it’s ideally installed in the front seat? 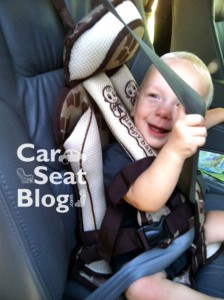 Now, clearly, I didn’t buy this seat with the intention of using it, nor will I. Nor should you. Nor anyone else. I bought it for a couple reasons. First, I wanted to have some photos and a good description available for any unsuspecting parents who might think this seat is an acceptable option. Second, I wanted the seat in my hands so I could report it to NHTSA and provide it to them if necessary. Third, well, I thought it would be fun to play with, plus I figured I could get my money back from Amazon.

Edited to add: Hey look – I was right! Thank you Britax and Surrey News for this awesome but horrifying crash test video which clearly highlights why you should never put a child in a “carseat” that does not meet Federal Safety Standards.

Shortly after I made the purchase, the listing was removed from Amazon. Likely some safety advocates alerted the company of the seat’s dangerous and illegal status. I also received an email from Galaxy Tech & Leisure, the company that was selling the seat on Amazon:

We are sorry to notice you about the item didn’t complete all the crash & safety test, we are here to notice you to contact Amazon customer support team to return the parcel for a full refund and DON’T use this product. We apologize for the inconvenience this issue has caused to you.

So if the company didn’t know before, they are now aware that they can’t sell the seat in the United States. (Whether or not they will attempt to again remains to be seen.) Hopefully Amazon.com will be able to keep such things from being sold on its site again, too.

Bottom line: Don’t buy seats that don’t meet federal safety standards. Obviously that won’t always be apparent from a product’s description, but some quick research should reveal what’s legitimate and what’s not. Be wary of products sold from foreign retailers. Safety is one area where you don’t want to risk a bootleg or a cheap alternative.

Looking for a safe & appropriate carseat? Check out our updated list of Recommeded Carseats.

Looking for a great deal on a safe & appropriate carseat? Check out our exclusive Deals Tracker page.