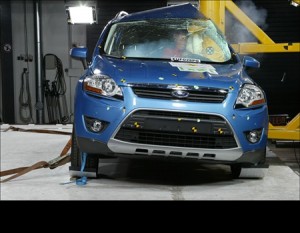 Yesterday, in part I of this blog, we covered the 3 specific crash tests that are performed on European vehicles in their New Car Assessment Program (NCAP) – frontal offset, side impact, and side impact pole test.  Today, we’re going to dig a little deeper and examine the child occupant components of the Euro NCAP.

Learning how other parts of the world are tackling the complex issues of child occupant protection can help give us some perspective on the shortcomings of our own NCAP program.  And, possibly, give us some ideas on how to move our program forward.  For more details on the US NCAP program check out our previous “Responding to the Tribune Article” blog.

Euro NCAP has carried out a child occupant safety assessment since its very first test in 1997 to ensure that manufacturers take responsibility for the children traveling in their vehicles. In November 2003, Euro NCAP introduced a child occupant protection rating to provide clearer information for consumers about the results of these tests. As part of this assessment, Euro NCAP uses 18 month old and 3 year old sized dummies in the frontal and side impact tests. As well as studying the results from the impact tests, Euro NCAP verifies the clarity of instructions and seat installation in the vehicle to ensure that the child seat can be fitted safely and securely. 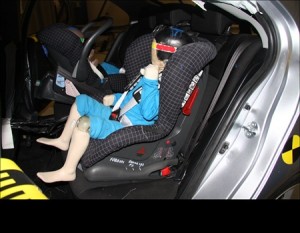 In the frontal and side impact barrier tests, dummies representing 1½ and 3 year old children are placed in the rear of the car in the type of child restraint recommended by the car manufacturer. The score depends on the child seat dynamic performance in front and side impact tests but also on the fitting instructions for the child restraints, airbag warning labels, and the car’s ability to accommodate the child restraints safely.  The child protection rating is for a combination of a car with specific child seats that have been recommended by the car manufacturer. The combination could earn up to five stars for child protection. 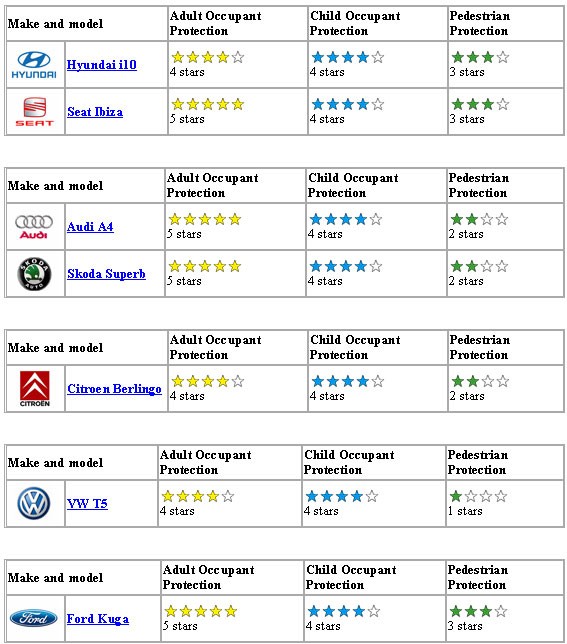 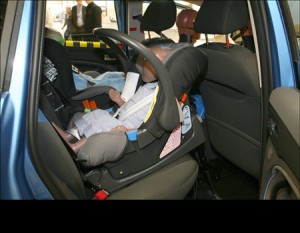 The interesting thing I noticed was that most newer vehicles used some combination of the same 2 CRs for the 18 month old dummy and the 3 year old dummy.  This means almost every vehicle manufacturer is picking the same two seats to use in the testing of their vehicles.  I’m not sure exactly why this is – but both seats seem to preform very well regardless of the vehicle so that probably has something to do with it.  Sadly, both of the child restraints widely used in these tests were once made for the US market.  However, neither sold very well and they were subsequently discontinued.  Such a pity.  But I digress…

Since Euro NCAP doesn’t appear to be testing a wide variety of CRs, this isn’t a comprehensive rating system of European child restraints.  But that was never the intention here.  Each European CR manufactured in the last few years has to meet the standards set forth in ECE R44/04.  This is the European equivalent of our FMVSS 213.  The NCAP testing of child restraints is additional testing carried out with the goal of making vehicles safer for child occupants.

Let’s just go back to my original point about how far behind the US is – after 5 years of rating vehicles and child restraints this way, Euro NCAP continues to move forward and raise the bar.  As of 2009, the child score has become an integral part of the overall rating scheme, even though the technical assessment remains the same.  Euro NCAP’s new scheme has introduced a new 5-star single overall vehicle safety rating – replacing the separate star ratings in use since 1997. The overall rating will be composed from scores achieved in four areas of assessment: Adult Occupant, Child Occupant, Pedestrian Protection and Safety Assist.  “This new system of scoring for child protection encourages car manufacturers to take responsibility for the carriage of children.”  In other words, the only way for a vehicle to achieve a 5 star rating from here on, is if the vehicle manufacturer focuses on ALL areas of occupant (and pedestrian) protection.  Plus there are now certain requirements for ESC (electronic stability control) and other features that fall under the “Safety Assist” category.  There are already 4 European cars that have received the new 5 star rating.  However, over the next 3 years, stricter requirements will be introduced, increasing the emphasis on all-around safety performance and demanding higher levels of achievement in each area.  All I can say is “wow”.  Just.  Wow.

Meanwhile, on this side of the pond, our crash testing program has been stuck in neutral for the last 30 years.  We seem to be too afraid to shift into gear and move forward.  What are we so afraid of?  Many of the manufacturers that make cars for the US market also make cars for the European market.  And let’s not forget the contributions of the IIHS over the last 10 years.  Thanks to the Institute, we aren’t quite so far behind.  I think everyone in the US who drives a safer car today than they did 10 years should thank the IIHS.

Don’t get me wrong, I’m not trying to say that we haven’t made any progress in occupant protection or child passenger safety lately because our NCAP is stuck in the dark ages.  It’s just obvious that we’re way behind other countries in many ways.  I think the Tribune article spotlighted some areas that need more attention and testing.

In case you’re still on the fence about additional testing and higher standards for vehicles and child restraints – consider the history of Euro NCAP in their own words:

From the beginning, the programme was ambitious, more comprehensive and there was a determination to ensure that full advantage was taken to ensure that the testing and assessment was scientifically based.  For comparative testing, it was clear that the testing had to be carried out to a higher standard than was necessary for legislation. Because of this, a detailed test protocol was developed.

In February 1997, the first results were presented at a press conference. The release of these first results caused considerable media interest, which was fuelled by the strong negative response of the car manufacturers. On the same day, the car manufacturers heavily criticised Euro NCAP, its tests and its ratings. One of the many claims was that the assessment criteria were so severe that no car could achieve four stars for occupant protection.

In July 1997, the results from the second phase of tests were published and Euro NCAP was pleased to be able to announce that the Volvo S40 had become the first 4-star car for occupant protection.  As new car models replaced those already tested, the improvements in their occupant star ratings could be clearly seen.  In June 2001, a further milestone was reached when the Renault Laguna became the first car to be awarded 5 stars for occupant protection.  Since 2001, standards have risen so that it is more common to achieve this rating and increasingly manufacturers see five stars in adult occupant protection as the goal for all their new models.

In many ways this history is similar to what we’ve seen with the IIHS crash testing program here in the US.  There’s a ton of resistance to the testing initially but once the bar has been set, you start to see rapid improvement in engineering and design.  No engineering team wants their design to be a loser.

Right now it seems that we’re still stuck in the resistance stage when it comes to setting the bar higher for child restraints.  Honestly, I don’t have a problem with the current “minimum safety standards” but I think our time has come for an ambitious, comprehensive, comparative testing program for US child restraints. Something similar to the OEAMTC child seat testing and ratings that Austria has been doing since 2001.  We know that all CRs are not created equal and it’s time to make comparative information available to consumers.  Parents today are so thirsty for real, comparative safety information.  But in the absence of such information – they’re willing to listen to just about anyone.  It’s time to give parents something more transparent than obscure ratings from Consumer Reports.