Any time a new recommendation from anything resembling an “authority” is released regarding the welfare of children, critics come out in droves to decry the advice. Sometimes, they have a legitimate concern. Other times, their reasoning is inherently flawed or purely emotional. For a background, be sure to read about the new AAP recommendations and check out the Rear Facing Link Guide for references. In this blog, Heather, Kecia and I put together some answers to fourteen popular questions:

1.) Won’t my toddler be uncomfortable facing the back? No, he or she will be just fine. Most toddlers are actually more comfortable rear-facing because the carseat is reclined and it’s much more comfortable to sleep that way than sitting upright in the forward-facing position. Plus they can prop up their feet instead of having them dangle unsupported. 2.) Won’t their feet or legs be injured because they are bent or crossed or touching the back of the seat?  No, but this is a very big misconception among parents. In reality, during a frontal crash (the most common type of crash), the legs will fly up and away from the back seat. It’s also much more important to protect the head, neck and spinal cord in a crash which is exactly what rear-facing carseats do so well. If you’re still not convinced – there is this study by CHOP (Children’s Hospital of Philadelphia) that looked at injuries to children ages 1 – 4 who were hurt in crashes and leg injuries were rare for those kids in rear-facing seats. However, injuries to the lower extremity region were the second most common type of injury for the kids in forward-facing seats. That’s because the legs of a child in a forward-facing seat are thrown forward and can hit the console or the back of the front seat. Study quote: “Injuries below the knee were the most common, particularly to the tibia/fibula, and they most often occurred due to interaction with the vehicle seatback in front of the child’s seating position.”

3.) Isn’t a child going to get carsick when they are rear-facing?  Keep in mind it’s all they know from day one. And while some children (and adults too) seem to be more susceptible to motion sickness in general – the direction the seat faces rarely has an impact on the frequency or severity of this occurrence.

4.) But my child is already forward-facing, there’s no way she’ll tolerate going backwards again!  Another popular misconception. In reality you don’t know how a child is going to react until you try it. And if you’re positive about it that greatly increases the chances that they will be too. Thousands of parents over the last decade have turned their children back after learning of the safety benefits of rear-facing (this knowledge that rear-facing is the safest way to travel isn’t new, by any means). The vast majority of these parents and caregivers receive little or no resistance from the child. So put on your happy face and give it your best try!

5.) My child fights me when I put her in the carseat rear facing. Wouldn’t it be easier to turn her seat forward?  Probably not. Around 12-18 months of age, most children go through an “independent” phase where they just want to be free of restraint of any kind. It’s just a phase—ask any experienced parent about it and repeat the phrase “this too shall pass, this too shall pass.”

6.) I can’t see my child, what if they are choking or have a medical issue while I am driving?  You can’t watch your child 24 hours a day–as much as you try to be SuperMom or SuperDad, you’re not. If you must feed your child in the car, feed him/her Cheerios or other such food that “melts” in their mouth. If the child has a medical issue, try to travel with someone who can sit in the back seat with her to monitor her condition.

7.) This is so intrusive, do you want me to put my child in a plastic bubble too?  For the vast majority of kids, facing the rear of the vehicle for an extra year really isn’t taking anything at all away from their development or well-being. Even if the reduction in risk seems relatively small to you, the disadvantages for the child and parent are generally only those of perception. If a child spends so many hours per day restrained in a vehicle that this seems like a restriction of a child’s freedom in some way, then perhaps these other issues should be resolved first.

8.) Isn’t this just another law telling parents how to raise their kids?  This is simply a guideline from a certifying body for pediatricians in the USA. Just as you don’t have to accept the advice of your child’s doctor regarding a diagnosis or treatment or vaccine, you also don’t have to take their advice regarding injury prevention. The AAP doesn’t make laws, they only give doctors guidelines regarding safest practice, based on research and statistics. Legislatures make laws.  While states can and do make many laws to protect children from harm, citizens who have legitimate concerns can be a part of the process if they are genuinely interested, beyond simply complaining about the woes of living in such a restrictive nanny-state.

9.) Isn’t this just the car seat makers forcing us to buy new seats?  No. Best we can tell, these guidelines are being issued by researchers, physicians and experts at the American Academy of Pediatrics, the National Highway Traffic Safety Administration and other agencies involved in injury prevention. We are not aware of a powerful, super-secret child seat manufacturer’s lobby or any other conspiracy behind these new guidelines! Plus, the fact is that all these agencies have encouraged rear-facing beyond 12 months for many years. That means that most convertible child seats in use today can accommodate most toddlers rear-facing up to 2 years old.  There will be some exceptions for the smallest convertibles or the largest children, but for many parents, there is no need to buy a new seat unless yours is too old or unsafe for some other reason.

10.) I didn’t have a carseat and I survived. What’s the big deal?  Consider yourself lucky! A relatively large number of your peers died in crashes because they didn’t have a carseat when they were young. In fact, child passenger fatalities from motor vehicle crashes have steadily declined since the early 1970s, even though we travel far more miles today than 30 or 40 years ago. Today, the number of kids who die each year as occupants in motor vehicles is roughly half what it was 35 years ago, even though we drive more than double the total miles as a nation today. According to the IIHS, “… passenger vehicle child occupant deaths in 2012 were 54 percent lower than in 1975.” 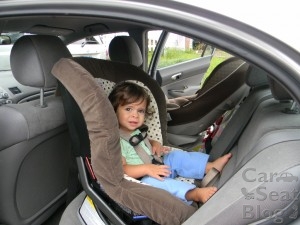 11.) What if I am rear-ended. Won’t my toddler be less safe if he/she is rear-facing?  The majority of rear-end crashes occur when both vehicles are traveling in the same direction; one car is usually stopped or in the process of stopping. Crash forces are lessened which means a lower chance of injury. For severe crashes, especially those involving a fatality, rear-end collisions are quite rare. Frontal and side impacts account for the vast majority of severe crashes, while rear-enders account for less than 10%. So, while we don’t have any data to compare injuries to kids in rear-facing seats involved in a rear end crash, these guidelines are intended to maximize protection in the most common and most severe types of crashes.

13.) My husband is an engineer/scientist/mechanic/know-it-all and says race car drivers are perfectly safe forward facing in a 5-point harness. Can you prove that my baby is safer rear facing?  Yes. For years, injury prevention researchers have known that the physics and kinematics of a crash prove that rear-facing is safer for everyone, when an appropriate seat is available. Young children gain a much greater benefit from rear-facing because their skeleton, connective tissues and their bodies in general are not as strong or developed as an adult body. The only other question is if real world statistics support the theory. The main study used to support the new guideline is from 2007. While it has some limitations, it does conclude that, “RFCSs (Rear Facing Car Seats) are more effective than FFCSs (Forward Facing Car Seats) in protecting restrained children aged 0–23 months. The same findings apply when 1 year olds are analyzed separately. Use of an RFCS, in accordance with restraint recommendations for child size and weight, is an excellent choice for optimum protection up to a child’s second birthday.” The full research behind the new guideline, along with more supporting evidence and references, can be found in Pediatrics. We do hope that more research will be done in the future to confirm the single 2007 study that is the only one to directly compare Rear Facing to Forward Facing for older babies in the USA. For now, the data available does seem to indicate that rear-facing is considerably safer than forward facing for children at least until their 2nd birthday and most likely beyond!

14) The booster guideline is outrageous, too!  I’m 50 years old and I’m not 4’9″ tall, so are you going to make me use a booster?  No. The fundamental differences between a typical 9-year old and an adult are maturity and skeletal structure. If a seatbelt is uncomfortable for an adult, they can make a choice about their own well being and continue to use it, because they know doing otherwise could lead to a serious or fatal injury. Before the age of reason, kids simply don’t make good choices about their own well-being. If the shoulder belt is uncomfortable, they will simply put it behind their arm or back. If they can’t bend their knees, they will slouch, causing the lap belt to move off the strong hip bones and into the soft tissue of the abdomen. Those choices can lead to very severe injuries in a crash. Boosters make the adult seatbelt fit better, making the kid more comfortable, making it less likely they will compromise their own safety.

Ultimately, these guidelines are not asking parents to do something different. They are only suggesting that parents use their convertible carseats in the rear-facing position longer to extend the protective benefits provided by the rear-facing position. Babies and toddlers won’t know anything different – they will simply be doing what they had already been doing since their first ride in the car. 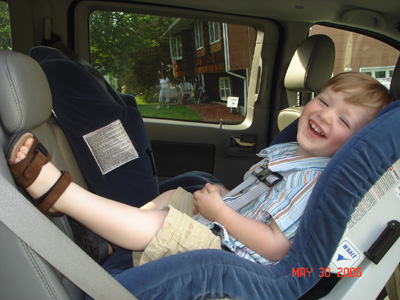