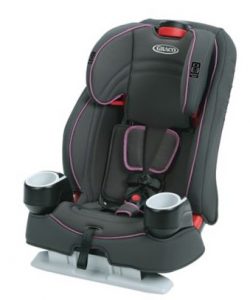 At first glance, you might mistake the Graco Atlas for a Graco Nautilus, which is understandable since they’re very similar seats.

The main difference with the Atlas is that it becomes a becomes a highback booster but not a backless booster like the Nautilus. The Atlas also doesn’t have the Nautilus’s steel frame, which isn’t necessarily a bad thing. That helps make the Atlas significantly lighter, making it a good option for a travel seat. The Atlas also has a nice feature the Nautilus lacks: The ability to tuck the harness out of the way (instead of needing to remove it) for booster mode. 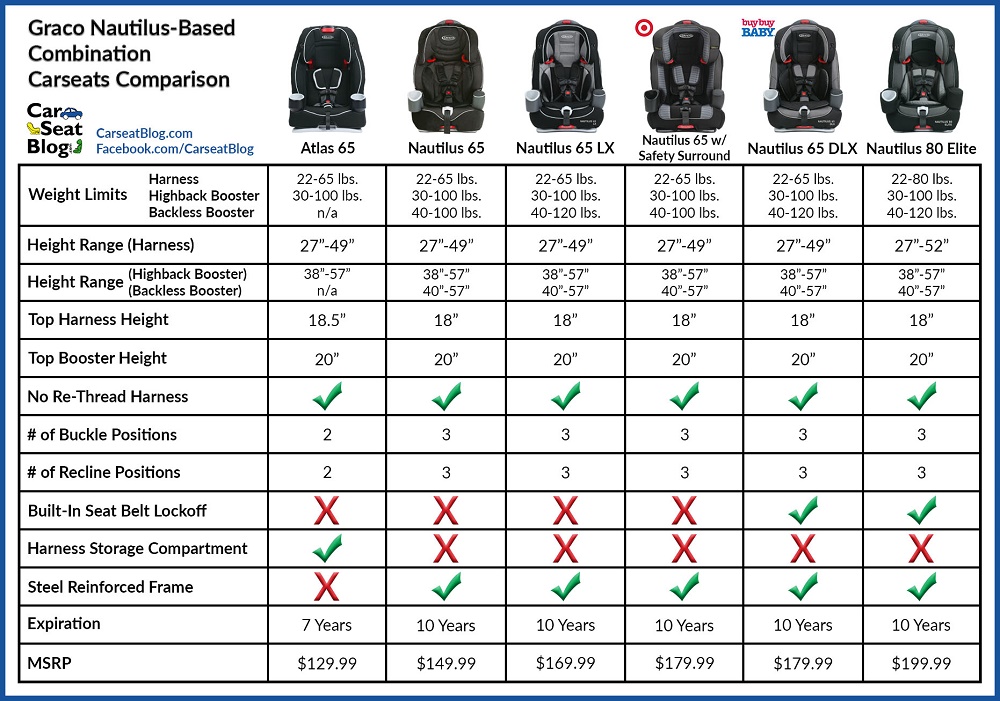 But instead of comparing the Atlas to the Nautilus, let’s take a look at the Atlas in its own right.

In my 2014 Honda Civic, the Atlas installed very easily with lower anchors. The cover has a slit in front that allows you to pull the tail of the LATCH strap parallel to the strap itself, making it very easy to tighten, so be sure to take advantage of that. Installing with the seatbelt took more effort, which surprised me because other seats (including the Nautilus) usually install well with the seatbelt in that vehicle. I was able to get a good installation, but I needed to kneel in the seat and it took a lot of tugging on the belt.

The very best thing about installing the Atlas in the Civic is that I was actually able to tighten the top tether! Because of the location of the Civic’s tether anchor (right behind the seat) and the bulky/inconveniently placed hardware on many tether straps, it is often impossible to get the top tether as taut as I’d like. The Atlas worked great, though! 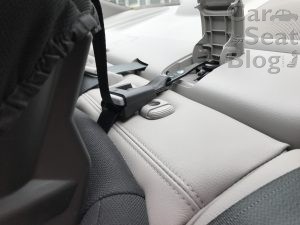 I had a similar experience installing in a 2018 Odyssey. LATCH wasn’t a problem, but the seatbelt installation took more effort than usual. I wound up getting a good installation but I had to work at it longer than I normally would.

Keep in mind that when you’re using the seat with the harness, the Atlas requires you to discontinue use of the lower anchors when children reach 45 pounds, so many people will need to install the seat (at some point, at least) using the seatbelt. 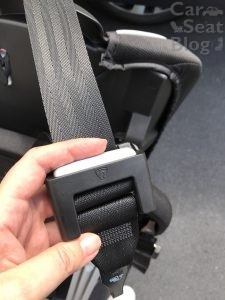 The good news is that it was remarkably easy to loosen the lower anchor and tether straps when it was time to uninstall. Sometimes the loosening mechanism on Graco seats can be difficult–I’ve certainly struggled with my fair share. They must have changed something, because the button was much easier to push and the straps loosened like butter.

The Atlas does allow LATCH to be used for children of any weight when the seat is used as a booster. That assumes that the lower anchors don’t interfere with the buckling/positioning of the seatbelt, of course. I didn’t run into any problems in the Civic and Odyssey (2011 and 2018 captain’s chairs) but it might not work in vehicles with offset anchors. LATCH isn’t required for booster use, so if you’re not able to use it (or just don’t want to) you don’t have to. (If you don’t use LATCH in booster mode, make sure your child buckles the booster in when they’re not using it. That will help keep it from moving around in a crash.)

I didn’t find that the recline feature added much significant recline for a child, but you can use it if you’d like to. In some cases, reclining a carseat or making it more upright can help achieve a better installation.

It’s important to note a few points for booster use. The Atlas’ manual states: “Vehicle’s seat headrest SHOULD NOT create a gap between vehicle seat and booster seat.” So if your headrest pushes the seat forward and creates a gap in booster mode, try raising or lowering it, or removing it if you can.

The manual also states, for booster mode: “The front of the booster seat MUST NOT hang over front of vehicle seat.” So make sure that the entire base of the Atlas fits on the vehicle seat when using it as a booster.

Harness: The Atlas offers a large range of harness height positions, meaning that it will fit a wide variety of children well. The harness height can be easily adjusted with one hand by squeezing a lever at the top of the headrest and moving it up or down. Since this is a forward-facing seat, the harness should always be even with or above the child’s shoulders.

The Atlas has two positions for the crotch buckle, and the manual states to use the one closer to, but not under, the child.

My 5-year-old fit well in the seat and still has a lot of room to grow. (He’s about 46 inches, 42 pounds, and wears a size 5/6 shirt.) This photo shows him sitting comfortably in the seat with the harness adjusted to a normal height: 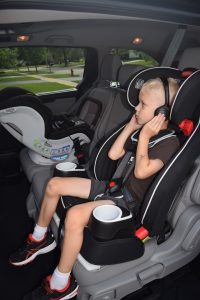 And this shows how much growing room he has: 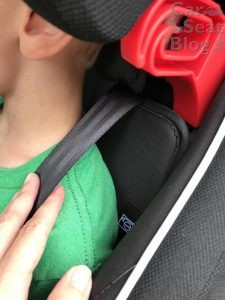 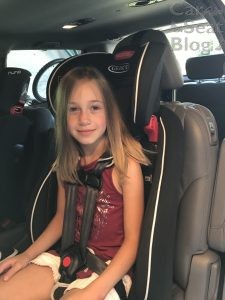 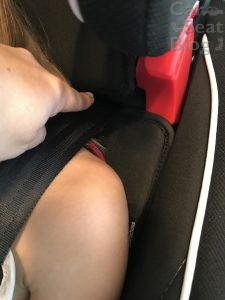 Booster: The Atlas also fit well in booster mode, with the lap belt low on his hips and the shoulder belt crossing the middle of his shoulders. The fit was equally good on both of my children, in all vehicles I tried. Booster fit is largely dependent on the size of the child and the characteristics of individual seating positions, though, so always make sure you check the fit on your child in your vehicles. 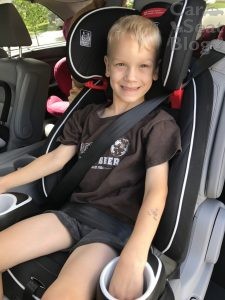 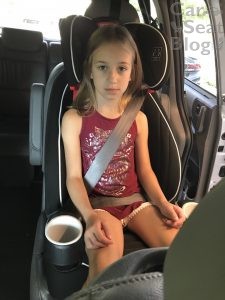 Overall, the Atlas was quite easy to use. The seat does require a bit of assembly, but just to add the cupholders/armrests. It’s a very simple process that probably took me less than a minute. 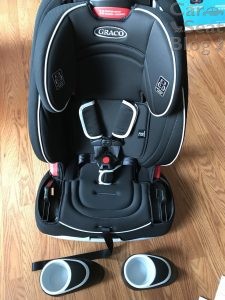 As mentioned above, the seatbelt installation took some work, but everything else was quite easy. The slit in the cover for tightening the seatbelt/lower anchor belt helps a lot, and the easier-to-use LATCH looseners make me want to cry happy tears.

The harness loosens and tightens smoothly, which is always a huge plus in my book.

Probably the best thing about the Atlas is how easy it is to switch between harness and booster mode. With many seats, you need to remove the harness before using it as a booster, which can be a hassle, especially if you need to switch it between modes often (or ever, frankly). With the Atlas, you can conveniently tuck the harness away in a panel behind the cover, without needing to remove it. You do need to remove the crotch buckle, but (unlike in some other seats) the buckle is extremely easy to remove. I’ve struggled with the buckle on similar seats to the point of wanting to throw it through the window, but this one took mere seconds. More tears of joy!

Here’s a video showing how easy it is to tuck away the harness:

Whenever I write a car seat review, I always save the cover removal for last because it tends to be my least favorite part. Some covers are really difficult/annoying, and it’s just no fun. Happily, the cover on the Atlas is extremely easy to remove and to reassemble! There are a few elastic loops that hook onto the shell, and a few tabs to stick here or there, but everything came off of and went back on in a logical place. The really nice thing is that the cover removes in three separate pieces—the bottom, the headrest, and the sides—so you don’t have to remove all of the fabric if you don’t need to, which makes things that much easier. 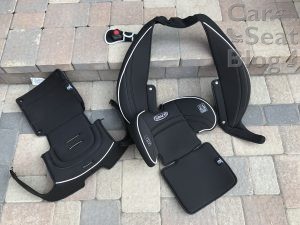 You can machine wash the cover in cold water on the delicate cycle, then allow it to hang or drip-dry.

Expiration: The Atlas can be used for 7 years from the date of manufacture. The sticker showing the manufacture date can be found on the side of the shell, near the child’s left shoulder. 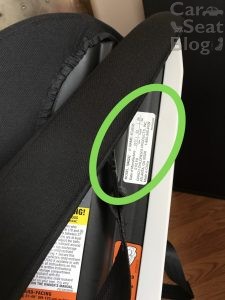 (In fairness, these aren’t necessarily problems but I list them here to inform potential consumers of specific Atlas issues)

In many ways, the Atlas can be considered a “Nautilus Lite,” both literally and figuratively. Although it doesn’t turn into a backless booster like the Nautilus, that shouldn’t discourage people from buying it. Backless boosters are relatively inexpensive, and most people looking into combination seats are likely years away from needing a backless booster.

Despite lacking a steel-reinforced frame, the Atlas feels sturdy and safe. The lack of steel also makes it about 10 pounds lighter than the Nautilus, meaning it could be a good option for travel or for moving frequently between cars.

Being able to easily store the harness in the seat instead of removing it for booster mode will save people a lot of time and effort.

The Graco Atlas retails for $129.99 but can often be found for $99 or less when on sale at Amazon and at other retailers.

Thank you to Graco for providing the Atlas for review. As always, CarseatBlog received no compensation for our review, and all opinions are our own.