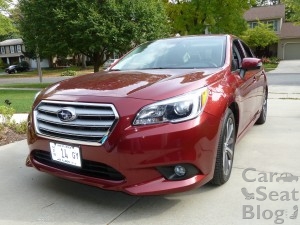 Subaru has really hit the target for the 2015 Legacy sedan.  When shopping for a midsize family vehicle, what do moms and dads need?  Subaru checks all the boxes.  At a bargain price around $25K, the AWD 2.5i Premium version with optional Eyesight package is among the safest sedans on the market, both in terms of avoiding a crash and in crashworthiness as well.  It’s bigger and wider than before, meaning more space for drivers, kids in back and cargo.  Fuel economy has improved as well, up to 26 mpg city and 36 highway for the 2.5L engine. Safety, value, space and fuel economy, a pretty solid combination!  Subaru checks some “wants”, too. Interior and exterior styling have been improved considerably, as have the controls, touchscreen and electronics.   While it’s not going to get looks like a Tesla sedan, it’s definitely sharper than the current Accord and Camry; on par with Fusion and Sonata for appearance.   Standard AWD is great for rain and snow.  Performance can be had in the 3.6R Limited trim that has decent power.

As for  Eyesight, it’s arguably the best frontal crash prevention system on the market.  It earned a “Superior” rating from the IIHS and avoided a crash altogether on both the low-speed and high-speed autobrake tests.  A very impressive feat matched only by other Subaru models with EyeSight and a couple luxury models that cost nearly twice as much or more.   Eyesight now includes adaptive cruise control, pre-collision braking and lane departure warning.  For the 2015 Legacy, it is also bundled with Blind Spot detection, Lane Change Assist and Rear Cross Traffic Alert as well.  The updated system on the new Legacy gets smaller, color cameras with a 40% increased detection range and wider angle of view.  It now operates up to a 30mph differential from the vehicle in front, up from 19mph in the previous system, and adds brake light recognition as well.

That all sounds impressive enough.  But we’ve seen many other manufacturers force you to the most expensive trim level and then add a pricey options package to get an inferior system, adding $10,000 or more to the cost.  So what does Subaru charge to get this top performing safety system?  $1,195.  Yup.  That’s it.  But wait, you have to get a loaded 3.6R Limited edition to add that package, right?  Nope.  The 2.5i Limited and even the affordable 2.5i Premium trims can add Eyesight as a single option!  Now that IS impressive.  Other auto makers should really wake up and start being competitive with their safety features, especially on vehicles marketed to families.  Kudos to Subaru for making this technology available to more families to protect their precious cargo.

Now standard on all 2015 Legacy trim levels are great safety-related features like a backup camera, bluetooth hands-free cellphone connection and a new rollover sensor to deploy the side curtain airbags.  A new driver seat-cushion mounted airbag helps keep the occupant in position to reduce the risk of abdominal seatbelt injuries and leg injuries.  Active Torque Vectoring is now standard on the Legacy and helps control that power in curves, too.  Eyesight equipped models also get steering responsive foglights to enhance illumination in turns.  Like all Subarus, AWD is standard.

Last, but not least, the ’15 Legacy aced the IIHS crash testing, earning a Top Safety Pick for all trim levels.  Models with optional Eyesight earn a Top Safety Pick+ award.  The Legacy not only earned the top overall rating, but also earned the top “Good” result in each and every test and sub-category measure.  Impressive.  In the equally important NHTSA government safety ratings, the Legacy and Outback also earned 5-stars in all five crash test evaluations and a 5-star rollover rating (4-stars for Outback), resulting in a 5-star overall rating.  Only one or two other vehicles achieved the top rating in every single evaluation from both agencies, and you have to spend over $46,000 on a 2015 Hyundai Genesis with the Tech Package to match these essentially perfect crash avoidance and crash protection ratings.  Impressive Indeed!

Have two or three kids?  No problem.  The back seat is now a bit wider and with careful selection, will fit adjacent or three-across carseats a little easier than before.  The configuration is similar to the 2015 Subaru Outback as well.  The main possible concern is that the seat cushions and seat backs are contoured.  This is typical of

many midsize sedans that have shifted away from flatter bench seating that made installing carseats easier.  While more comfortable for adults, these contours may cause some issues with certain carseats, especially taller and wider front-facing models.  Overall, nothing particularly problematic for a midsize sedan, though the LATCH anchors are more recessed than average.  The fused driver-side and center buckle stalks could present difficulties in certain situations with adjacent carseats/passengers in those positions.  The rear seat does offer a split folding feature and the trunk is a very reasonable 15 cubic feet.

The 3.6R Limited is a pretty nice package.  My tester came equipped with Moonroof/Navigation package for a total MSRP of $33,380 including $795 destination charge.  Fuel economy is 20 city, 29  highway on regular gas.  I achieved a hair under 20 mpg in suburban driving.  What about performance?  Acceleration is lively enough, if not a little jumpy from a dead stop.  Handling and braking are quite sound, too.  Don’t expect the same spirit from the 2.5 liter engine, though it’s not as much of a downgrade as you might expect in going from 256 hp to 175 hp.  Its forte is fuel economy.  Besides, if you have teen drivers, you’re happy to have somewhat less performance to discourage dangerous driving!  Plus, around most suburban and urban areas, there’s hardly much reason to show off your midsize family sedan’s acceleration in routine traffic. The automatic continuously variable transmission is now standard, too.  It’s smoother and quieter, but definitely not sporty.   With it, the Legacy is not going to win top accolades from auto driving enthusiasts, but most parents with young children and teens aren’t looking for class-leading performance anyway.

The new Legacy is also improved in comfort.  It’s quieter overall than before and the ride is good over most pavement types I tried. Previous Legacy/Outback models always seemed to have harder seat cushions that were not to my preference.  I found these seats to be very comfortable, though to be fair I didn’t have a chance to take it for a long road trip.  As mentioned, visibility is quite good for a sedan, and excellent compared to typical SUVs and vans.  I do suggest the 2.5i Premium trim at minimum, mostly for the available Eyesight option, but also for the standard alloy wheels, power driver seat and cold weather gear that includes heated front seats, windshield wiper de-icer and heated mirrors.

The interior is updated and modern.  I had no issues with its quality or appearance overall, especially in the Limited trim.  As for electronics, I had no issues pairing an Android and iPhone.  Basic features of the new infotainment system were easy enough to master.  The dash layout is very good, with a similarly excellent multi-information display in between the gauges.  The controls and touchscreen were also very good and everything was intuitive to adjust.  I do wish the clock was more conspicuous, though.  I had no issues with those Eyesight features I could test.  There was no evidence of premature warnings I’ve observed in some other systems, especially for lane departures.  Added bonus?  Here’s a clever feature that will benefit some drivers and also the cars behind you:

Below, left, a 3-across setup featuring a Britax Frontier 90, rear-facing Diono Radian RXT and a Maxi-Cosi Rodifix booster.  Below, right, a Graco Affix booster with a Britax Boulevard ClickTight rear-facing convertible seat. 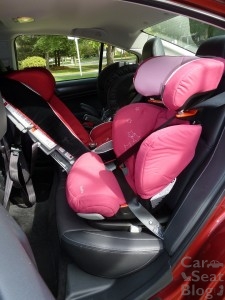 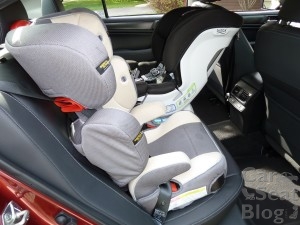 Below, a rear-facing Graco 4Ever and a Peg Perego Primo Viaggio 4-35, showing that you still have enough leg room up front for an average adult, even with a larger rear-facing seat directly behind you. 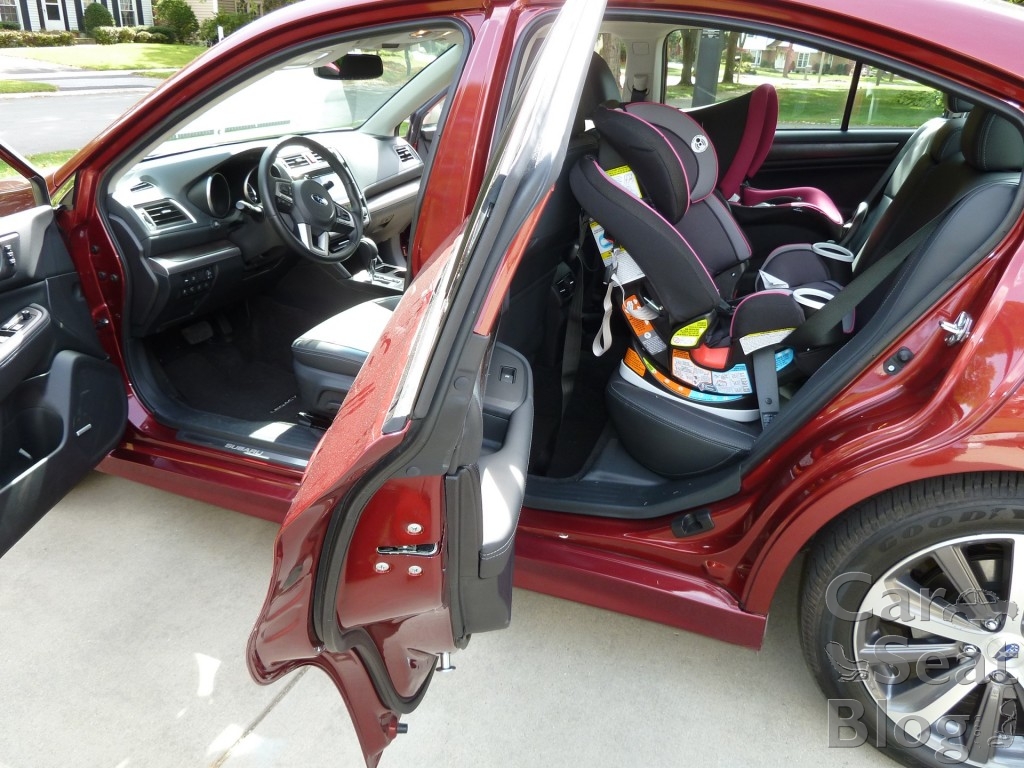 With the latest updates, the 2015 Subaru Legacy should move from niche vehicle to the mainstream and now competes very well with the Honda Accord, Toyota Camry and Hyundai Sonata.  If safety and value are top concerns, it’s nearly impossible to come close to what the Subaru Legacy Premium trim has to offer.  And it goes far beyond that with sharp styling, reasonable fuel economy and enough room for a family of 4 or 5.  If sporty and fun-to-drive is the goal, and AWD is a must, the Ford Fusion or Chrysler 200 are perhaps the top competitors.  Though closer to $30,000, the Chrysler 200C with SafetyTec and Full Speed Fwd Collision Warning Plus is notable for its great IIHS and NHTSA results as well.

It’s really hard to find any major fault with the Subaru Legacy at all, though those seeking performance or an element of “fun-to-drive” must opt for the pricier 3.6R Limited trim. My perspective is a little different than many other auto reviewers, and I’d opt for the 2.5i Premium or 2.5i Limited trim without hesitation.  Fuel economy, value and teen drivers make that choice a no-brainer.  Finding a reasonably priced sedan with every advanced safety feature was all but impossible a few years ago and is still difficult today.  In my opinion, the 2015 Legacy with Eyesight is the safest non-luxury sedan on the market right now and arguably the safest new vehicle you can buy for close to $25,000.  And the best part is that to get that safety for your family, you really don’t compromise anything else when comparing the Legacy to its midsize competition.

Thank you to Subaru of America for the loan of the 2015 Legacy 3.6R Limited used in this review.  No other compensation was provided and all opinions are my own.