For a few months now, the parenting world has been abuzz with confusion over these new LATCH limits. We at CarseatBlog have been trying to explain things in clear language so people don’t have to read through volumes of government documents to understand it all. Our recent post, New Federal Regulations Regarding LATCH Weight Limits – What Parents Need to Know gives a general summary of what most people need to know.

But what about those of you who want to know more? The nitty-gritty behind the why’s of the whole thing, and the small changes that have occurred since the time the new amendment was first proposed? That’s where this post comes in.

But some people raised concerns that the wording was unclear and might cause people to think they had to discontinue harness use at that weight, rather than simply switch to a seatbelt installation.

NHTSA listened to those concerns and has created a new solution that will be required starting February 27, 2015, or can be implemented sooner for manufacturers who want to. That solution is a diagram that is supposed to eliminate confusion. 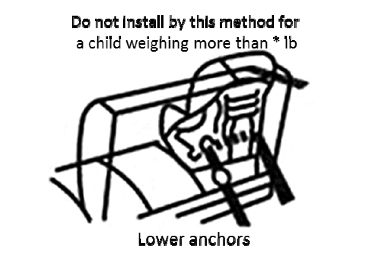 The idea is that the drawing shows lower anchors, and therefore makes it clear that it’s the lower anchors that are supposed to be discontinued at a certain weight (implying that it’s fine to keep using the seatbelt).

I applaud their effort, but I’m not sure the diagram will eliminate confusion, and I suspect it might even increase it. Yes, it says “lower anchors,” but a lot of parents don’t really understand what that means (as opposed to a top tether, or as opposed to a seatbelt which does, after all, anchor in the child seat). I think it’s very likely that people will look at the diagram, see webbing (of some sort) and assume that it’s no longer safe to install with LATCH or the seatbelt or top tethers. A better illustration might have been a drawing of a LATCH connector itself, but it’s probably too late now. Hopefully the new labeling won’t cause too much confusion.

The second change in the final ruling about LATCH limit labeling is that manufacturers will have the option of rounding the maximum forward-facing child weight up to the next 5 lbs. The idea behind this was to make the numbers “cleaner.” For example, instead of saying that LATCH should be discontinued at 42 lbs, the label could state 45 lbs.

NHTSA did concede that in some cases, this could make the total weight of the child plus seat exceed 65 lbs. Say a seat weighs 37 lbs. 65 minus 37 is 28 lbs, but to keep things simple, the manufacturer could state a child weight of 30 lbs. That means that the actual total weight would be 67 lbs (and feasibly a combination could get as high as 69 lbs.) but NHTSA believes anchors will be strong enough to allow for that slight variation.

It is important to note that the rules are slightly different (and slightly more confusing) for rear-facing. NHTSA is ok with allowing the total forward-facing weight to go a bit over 65 lbs because the top tether helps reduce some of the force on the lower anchors. Rear-facing, though, the lower anchors take all the force. In that situation, NHTSA doesn’t want the LATCH weight to exceed 65 lbs at all. So if manufacturers want to round the weights to nice numbers they can, but they need to assume a 60-lb total when they do. That ensures that the total weight will not be more than 65 lbs, even if they round up.

Let’s take the Graco Smart Seat as an example. It weighs just under 34 lbs. That means the total child weight would be 31 lbs. (65-34=31) Graco has two choices for listing the forward-facing LATCH limit. They can put 31, or they can round up to 35, which puts the actual limit at 69, but that’s still considered compliant. (Graco can also put a lower number if they’d like.) For rear-facing, they can use the actual 31-lb weight or a lower number, but they cannot round up since the total rear-facing LATCH weight must not exceed 65 lbs.

That means that a seat could have different LATCH limits rear-facing and forward-facing. (In cases where the weight limit is different, manufacturers will either have to take the lower of the two weights and include one limit and diagram, or they can provide two separate ones. In the situation above, Graco could choose to list a 30-lb weight limit regardless of which direction the seat faces.) 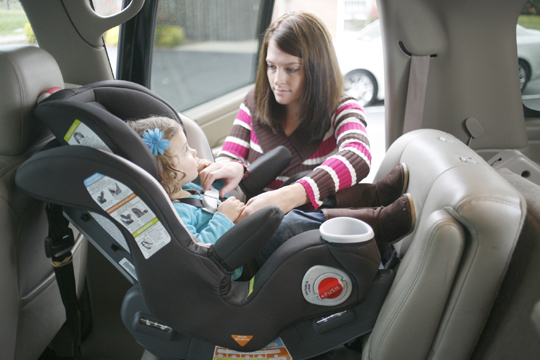 Background behind the Decisions

So what logic is behind this madness? Believe it or not, it actually makes some sense.

To back way, way up, all this confusion stems from the fact that the standard apparently wasn’t clear to begin with, and some people have been misinterpreting it all along. Some manufacturers and advocates had been operating under the assumption that when the LATCH standard was created, it allowed for a 65-lb child weight. NHTSA has said that no, the standard was always meant to include a combined weight of 65 lbs.

At the time the standard was written, that was probably sufficient, but a lot has changed since then. We now have many seats that by themselves weigh at least 25 lbs, and some approaching 40. Add to that the fact that weight limits for the harnesses have increased from a maximum of 40 pounds to as much as 90 now, and you have a lot of extra weight that just didn’t exist when the standard was written.

People have also speculated for a long time that a car’s anchors can hold much more than 65 lbs. However, based on some anchor failures discovered by Canadian testing, NHTSA conducted similar tests and found that some anchors failed (literally ripped out of the car) at a combined weight of 78 lbs. That isn’t a whole  lot more than 65 lbs in the grand scheme of things.

Much of the previous speculation about anchors holding a higher weight is probably due to the fact that most/all testing was done on a test bench, which has anchors reinforced much more than those in cars. The test sled is designed to be used to simulate multiple crashes, and therefore would be expected to hold up better than a passenger vehicle. After all, the point of the sled is to test the seat, not the anchors. 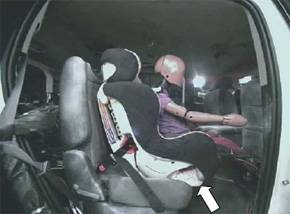 What does this mean for Diono’s SuperLATCH?

For a few years now, Sunshine Kids/Diono’s SuperLATCH connectors have allowed parents to use LATCH to the maximum weight of the seat (65 or 80-lb child weight) as long as their vehicle was manufactured after September 2005 (model year 2006 or newer). Some parents and CPS Techs have wondered what this new ruling means for SuperLATCH. Given that NHTSA did not grant exceptions or make any major changes, it would appear that this ruling marks the end of higher weight LATCH limits on Diono seats going forward. (For reference, a Radian RXT used to the maximum harness weight of 80 lbs would weigh a whopping 105.8 lbs. That’s far greater than the 78 lbs that caused anchor failure in NHTSA testing.)

According to NHTSA’s measurements, the Radian R100 and R120 weigh 24.2 lbs, meaning that its actual child weight limit would be 40.8 lbs. For forward-facing, Diono could round up to 45 lbs. Rear-facing they can’t round up to 41, as that would exceed the 65-lb rear-facing maximum, so the seat could potentially have a rear-facing LATCH limit of 40 lbs. (The R100 wouldn’t actually need to have a LATCH weight limit given for rear-facing since the seat only rear-faces to 40 lbs.) The RXT weighs 25.8 lbs. That means an actual child weight of 39.2, or a rounded rear-facing weight of 35 and a rounded forward-facing weight of 40. This is all speculation at this point but we will attempt to confirm this information with Diono and share the facts when we have them. 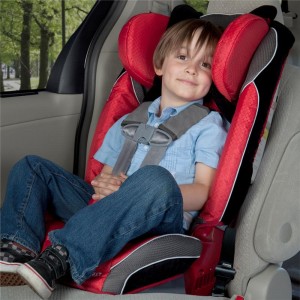 Although this doesn’t pertain to LATCH, the other new change to the car seat standard is that seats rated over 65 lbs will now need to be tested with a taller dummy representing a 10-year-old child. This means that some seats will see a decrease in the overall weight rating.  Diono will test the RXT and R120 with the dummy and will continue to hold children to 80 lbs. (Remember, this is just regarding the harness weight limit, not the LATCH weight limit or harness height limit) The Britax Frontier, and Pinnacle and Pioneer are apparently the only combination harness/booster models to be rated above 65 lbs. and also have harness height settings appropriate for older kids.  The Graco Argos 80 will be introduced this summer.  We will be sure to bring you any updates as soon as we have them!

I know this seems like a lot of rather overwhelming information, and it is. However, the bottom line is that going forward, information on LATCH limits should be easier to find than they are now. People will be able to look at a label on their seat rather than having to comb through manuals that might or might not include any information, or needing to track down elusive documents that even many CPSTs don’t have.

A lot has changed in the car seat world, and even though this solution might not be ideal, something needed to be done. Maybe someday LATCH anchors will be required to hold greater weights, but until then it’s best to exercise some caution. Some people see these new limits as a step back, but given our current realities, it’s probably a necessary one.