It’s crazy.  The “secret list” parents must consult to determine whether or not the top-tether component of the LATCH system can be used for an older child.  Apparently, some automakers are unsure of the strength of their hardware, so they adopted unpublished weight limits.  Other companies expect parents to know the exact weight of their child seat, and then subtract it from 65 to determine the weight limit for the child.  Simple, huh? Is that a child with 10 pounds of winter clothes or no clothes?

To work around the confusion, some advocacy organizations had suggested that unless both carseat and vehicle owners manuals clearly specified a higher limit, parents should be instructed to use a very low 40 pound limit.   Of course, there was nothing in most vehicle owner’s manuals to support this, causing some to wonder why we are trying to fear parents away from using top tethers!  What to tell a parent who bought a $300 carseat with a 5-point harness system rated to 80 pounds?  “Sorry, ma’am, you can’t use that critical safety feature past 40 pounds for your taller child who needs the tether the most.  And I really can’t tell you why, but I’ve heard the company that made your car might have said so.”

Fortunately, some auto makers have been willing to go farther!  Many now allow use of the top tether, an important safety feature, up to the maximum weight limit specified by the child restraint manufacturer.  For example, Volkswagen recently adopted this guidance, making it much simpler for parents.  The fact is that many parents don’t use the tether as it is, and those who do rarely realized that there were obscure limits for their use.  No wonder why! 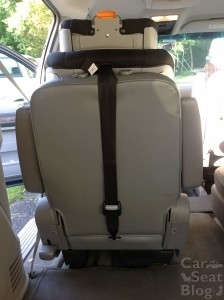 Why are some auto makers causing parents to doubt the strength of these anchors and why are they making it so confusing?  We don’t know, but we do extend our appreciation to the following manufacturers who have adopted a more common sense approach and make it simpler for parents!  These car makers defer to the child restraint manufacturer instructions for top-tether weight limits when used with a seatbelt for installation:

Weight limits for use of the lower anchor component of LATCH vary considerably. Please consult your owners manual(s) for official guidance.

* Select models only. The National Child Passenger Safety Board now has a complete list on their website.