Don’t want a big minivan or midsize SUV that is lucky to get 20 mpg around town under ideal conditions?  Looking for something less expensive with great fuel economy that can still fit three kids in back?  Also want this vehicle to have good crash test results and the latest advanced safety features available?  It’s the 2013-2014 Ford Fusion Hybrid!  A fuel efficient, safe family sedan that also gives you the warm, “green” fuzzies.

As a midsize sedan, the second row seat is comparable in legroom and width to a typical midsize SUV.    A few minor compatibility issues: non-removable head restraints, very short and rigid buckle stalks, recessed LATCH anchors and some seatbelt crossover for the middle seat.  All relatively minor, so most carseats should install well.

The middle seat is modest in width and may fit a narrower carseat, such as a BubbleBum booster, Combi Coccoro, Clek Foonf, Diono Radian or similar model.  The biggest potential issue might be a younger child buckling themselves in a booster with an adjacent carseat.

Overall, a reasonable back seat with some 3-across carseat potential with a careful selection of carseats.  It also folds 60/40 and offers reasonable cargo capability, especially compared to other hybrid sedans.

Below you can see a few example configurations.  A Britax B-Safe and Recaro ProSport (top left). A three across (top right) with a Britax Frontier 90, rear-facing Diono Radian and Graco Connext booster. Finally, a demonstration of rear-facing space with a Britax Advocate and Graco Snugride 30 (bottom). 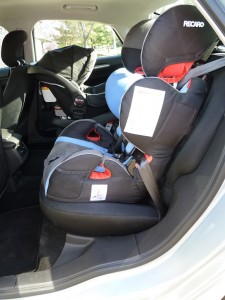 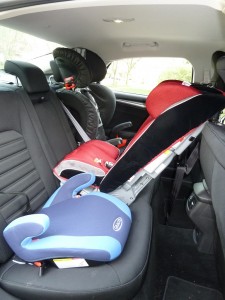 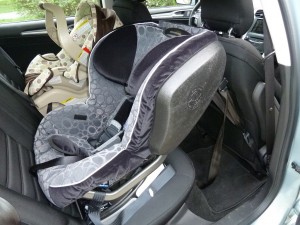 I really enjoyed the Ford Fusion Hybrid.  Other than the $30K+ price tag for a reasonably equipped model, most of the drawbacks I found were relatively minor and subjective.  I did prefer driving quite a bit more than our Toyota Prius.  Plus, it’s a lot friendlier for kids in the back seat.  Even the roomier Prius V is no match overall for the Fusion Hybrid.  The Fusion is bigger, easier to fit kids in back, more fun to drive, more stylish and gets similar fuel economy.  In my week of driving, I managed just over the EPA estimate of 47 mpg city over a few hundred miles of running errands with kids in Chicago suburbia.  Granted, I have some experience driving hybrids, but even if you drive it like a normal car, getting over 40mpg around town is a pretty good deal!  Our Prius does quite a bit better in similar conditions, but it is a smaller and lighter vehicle.  Plus, it’s just not great at fitting 3 kids in back, especially if one or more is in a carseat.  The Fusion Hybrid may well be the best compromise for a safe, family friendly and fuel efficient midsize vehicle.