All Vivas/Viva Supremes have been recalled.  Please see their website for more information. 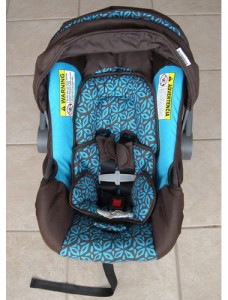 The Viva Supreme is the latest infant seat from Mia Moda. It is rated for infants who weigh between 4 and 22 pounds and are less than 29 inches. It replaced the now discontinued Viva (model 5070). Changes to the Viva Supreme (model 5080) include an additional lower set of harness slots, a full body insert, a larger sun canopy, a smaller chest clip and a different buckle.

The Viva Supreme has an extendable canopy. There is a zippered section in the center that allows it to extend from 14″ to 22″ (measured from the top of the shell). When zipped, the canopy is solid colored and there is a piece of velcro to keep the extra fabric from hanging down on the child.

The cover is adequately padded and is a nylon fabric on the outsides with a softer cotton-blend type of fabric for the patterned center panel. The cover may be handwashed only. The newborn insert is made of the same softer fabric as the center panel. The insert is optional for use from 4 to 12 lbs.; if used, it must be removed at 12 lbs. The shoulder pads are nylon and wrap around the harness with a velcro closure. It is shown here in the Kaleidoscope pattern. There are two other patterns available.

The five point harness is a non-continuous loop (has terminal ends) and has a front adjust mechanism. The adjuster is smooth and appears to be the same as those used on the Graco SnugRide infant seats. The harness has two sets of loops to accommodate small babies. The chest clip measures 4.5″ x 1.5″.

The Viva Supreme has an adjustable stay-in-car base with three recline positions. There is a LATCH storage compartment; the cover also functions as a belt cover for both the LATCH strap and seatbelt. It does not have a lock-off. The LATCH strap has the common basic clip style hooks. The release lever for the carrier is inside the back of the base.

The Viva Supreme can be installed without the base and has a guide on the back of the carrier shell for European routing of the shoulder belt when not using the base. European style routing helps reduce downward rotation in a crash.

The handle is ergonomic and has three positions. Any locked position may be used in the vehicle. The Viva Supreme may be used with certain Mia Moda strollers and the carrier is locked to the stroller by rotating the handle to the top of the shell/middle position.

The top of the shell is fully lined with EPS foam.  Unfortunately, it was cracked on my sample [Ed. Note: Mia Moda inspected their warehouse stock and did not find any other incidence of cracked foam.  They believe it was a fluke that happened at the factory as it doesn’t appear it could be caused once put in the box.  They have taken steps to make sure this does not happen again].

Using the base is straightforward. The adjustable recline foot is easily raised and lowered by pulling the release lever on the front of the base. There are angle indicators on each side of the carrier shell. The indicator must be within the green area and cannot be in the red zone. A rolled towel or pool noodle may be used to help achieve the proper angle.

LATCH – The Viva Supreme base requires dedicated LATCH positions with standard spacing of 11″. The LATCH strap is conveniently stored in the compartment under the beltpath. The belt is routed under the flap type cover and through the belt guides with the buckle on the passenger side.

Seatbelt – the seatbelt goes under the cover of the LATCH storage compartment (both portions when using a lap/shoulder belt). I didn’t do that the first time I installed the base and the seatbelt seemed to interfere with snapping the carrier into the base, so it’s important not to skip this step.

The Viva Supreme carrier has belt guides and may be used without the base. It has the added functionality of a belt guide on the back of the shell to utilize Euro routing of the shoulder belt.

It’s important to note that neither the belt cover on the base nor the belt guide on the back of the shell function as lock-offs. A locking clip is provided.

The Viva Supreme is light and tall. While a 22 lb limit is generally sufficient for an infant carrier, I would have liked to see an increased weight limit in the changes from the previous Viva model. I think it has the shell height to accommodate a 30 lb limit, of which we are seeing more all the time. I like that it has four harness slots- the most I’ve seen on an infant seat short of being infinite or sliding adjust. My daughter is 5 months old. She weighs 17 lbs and is 26″ long. She is on the second harness slot with 4 to 5 inches of shell above her head before reaching the relative height limit of 1″ from the top of the shell. She will almost certainly outgrow it by weight before height. She’s a chunky one and is already too heavy for the insert, but is still well supported.

Some acquaintances were kind enough to let me check the fit of their babies. The second child pictured is a 31″ 13 month old. He is in the 95th percentile for height. He is 25 lbs and has outgrown the carrier by weight, but still has several inches before outgrowing it by height. The tall shell of the Viva Supreme should accommodate all but the longest and leanest babies through the 22 lb weight limit. Third is a 10 lb baby (seen here in both the Viva Supreme and a 22 lb Graco SnugRide for comparison). The insert supported her well and she was well above the lowest slots. I believe that the 4 lb lower limit is realistic when the insert is in use. This is a change from the Viva, which had no lower weight limit and was rated from birth, but didn’t have slots low enough to accommodate a premie.

The harness and its components have both good and bad points. The adjuster is smooth. It is a center pull/front adjust mechanism. The buckle is a standard metal buckle with tongues that can be inserted individually, an improvement from the plastic puzzle buckle of the Viva. I like the new chest clip, which is comparable in size to (if not a bit smaller than) that of the SnugRide. I prefer it to the more common design in that you only have to push the front with your thumb to release the tab rather than pinch top and bottom.

The webbing is thick, almost too much so for the hardware. It is a bit aggravating to change the harness height because the splitter plate openings are too narrow for the webbing. The first thing I noticed when removing the seat from the box was that the harness was folded over in the buckle tongues and bunched on the splitter plate. The bunching is even more pronounced when using the inner loops for smaller babies. The seams of those loops also catch on the slots in the shell when loosening the harness. It is worth noting that the Viva Supreme uses the same IMMI components as other popular infant seats, like the Chicco Keyfit. The bunching and potential folding would concern me, but it doesn’t seem to cause too much trouble on the Chicco seat. Extra care may be necessary to avoid twisted straps.

The harness adjuster strap has a separate slit in the cover at the front of the seat. It’s forward of the adjust lever by several inches. There is sufficient space to access and adjust the harness when using the base, but it’s crammed into the vehicle seatback when installing without that base. This isn’t a major concern because the carrier is usually not in the vehicle when buckling the child and adjusting the harness.

The base is narrow and easy to adjust and install. I didn’t notice any quirks that will cause incompatibilities. It is somewhat awkward to remove the carrier portion because you have to reach inside the base to access the release lever (which means no multi-tasking and keeping your keys/phone/wallet in your hand as I am inclined to do). It is especially cumbersome to remove the carrier if the handle is down because you have one hand inside the base as you are trying to lift near the top with the other, but the handle hits the arm of your releasing hand. Removing the carrier did get easier with practice but it often took me more than one attempt to get it out of the base. Additional bases can be purchased separately (model 5081) and the Viva Supreme is compatible with the Viva’s base (model 5071).

The cover seems to be high quality. It is nylon in places, but not too rough or scratchy. The strap covers are just large enough to be functional without being bulky or interfering with tightening the harness. The length of the extended canopy provides great coverage. I used it to take my extremely fair skinned baby to the park and it kept her well shaded. The place where the support meets the handle is notched and takes a bit of force to rotate it back and forth. It makes a distinct clicking noise as you move it. It’s by no means loud, but certainly not stealthy. I had trouble moving it without waking a sleeping baby.

In theory, I’m a big fan of European routing of the shoulder belt. I thought this would be a great feature because in general the child would be buckled in the carrier when it is being installed. This would mean you wouldn’t have to load or unload over the shoulder belt, which is an understandable complaint of this method. However, the seat didn’t stay tight without locking the belt, which made it difficult to use the routing behind the seat and the locked retractor caused the carrier to tip. Having the shoulder belt locked also made it more difficult to remove the carrier- especially with a child in it. The handle seemed to interfere with the routing. If you do choose to utilize this feature, I found that the middle handle position interfered the least.

At an MSRP of $109.99, the Mia Moda Viva Supreme is a respectable mid-budget infant seat. It is a solid contender at that price point with a front harness adjuster, EPS lining and a tall shell. It’s not too wide, has a nice insert, the handle can be left up in the vehicle, and it has a wide range of harness heights. The lack of a lock-off and the 22 lb limit are somewhat disappointing, but not deal breakers. The bunching, potentially twisting harness could be a nuisance, but the same issue exists with other (more expensive) infant seats. While a few small tweaks in either the hardware or the webbing could make a significant improvement, the issue is certainly manageable as is. Thankfully, the Viva Supreme has a standard metal buckle and not a plastic compound buckle like its predecessor and other infant seats in the same price range

The Viva Supreme is made in China. It is certified for use in aircraft. It has an expiration period of 7 years and must be replaced after any crash.

You can read more about the Viva Supreme at miamodainc.com.