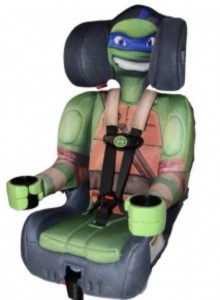 While most other car seat companies are producing fashions that appeal to parents, KidsEmbrace has been cornering the market on styles that appeal to kids, which is probably a smart move. Batman might not be your thing, but if he gets a kid excited about a car seat, how can that be bad? (Unless the Batman car seat is scaring people in parking lots, but that’s a different matter.)

Last fall, people went crazy over the prospect of a Teenage Mutant Ninja Turtle seat. My own daughter barely even knows what a Ninja Turtle is, yet she couldn’t wait to sit in this seat. It was too cold to play with when we first got it, but she actually gave it a hug every day when she passed by it in the garage. That’s love.

So, what’s the low-down on the KidsEmbrace seat? Is it totally tubular or just a pretty face? Let’s find out. 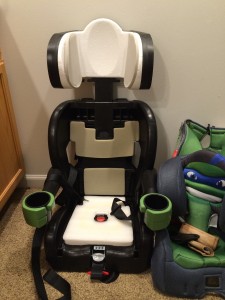 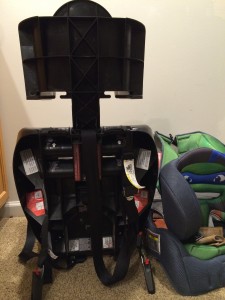 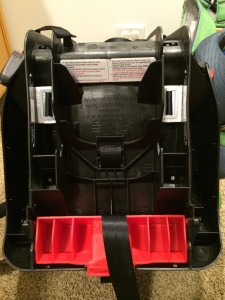 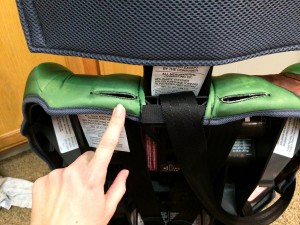 But then I noticed that in the KidsEmbrace stock photos, it appears that the harness goes all the way up to the top of the shell. So I pulled back the cover, and lo and behold, there were some things that kind of looked like harness slots, but not really. 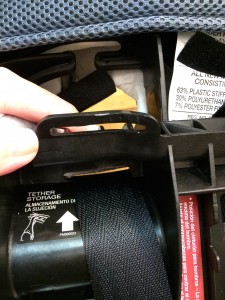 So we weren’t exactly sure if those were harness slots or not. The manual clearly shows two sets of slots (“J” on the diagram. “B” is referencing the seat belt positioners for booster use): 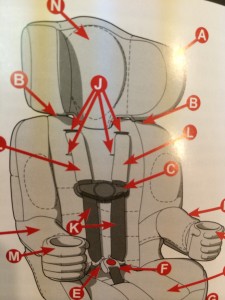 The diagram for the back of the seat points to tether storage being located in the area of the “phantom harness area.” On the back of the seat, there are little squares that seem to be for the tether storage (I didn’t pay attention to where they were when I got the seat), and yet the drawing on the seat itself makes it look like that mystery harness area is for the top tether. 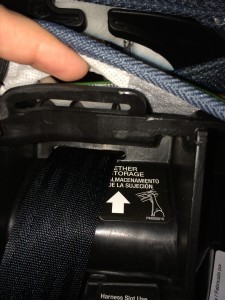 If those were supposed to be harness slots, they certainly didn’t look as reinforced as the other slots.  The plastic around the slot does not inspire the same confidence as some competitive models, particularly for side impacts.  (My finger is on the “top slot.” You can see the other reinforced slots below.) 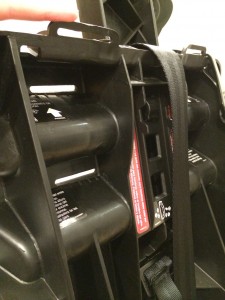 Based on all that, we concluded that those extra bits are NOT harness slots…and yet the stock photos and slits in the cover seem to say otherwise.  Given the appearance and the discrepancy in the manual, we can imagine the reservations that advocates and parents may have!

We wrote to KidsEmbrace for clarification on the confusion, and they confirmed that those are indeed the top slots. Although they seem to be less reinforced than the other slots, they assure us that the slots pass testing. They have also updated the manual to show the three sets of slots, so there should be less confusion going forward.

Installation is pretty straight-forward with the KidsEmbrace seat. There’s no weird routing or finicky lock-offs to deal with. However, there are a few things to keep in mind.

The belt path is very narrow and rather sharp. My hands and arms took a beating, and I have VERY small hands. Unlike some seats, there are no slits in the cover that allow you to reach through to the seatbelt better, but it is possible to partially (and rather easily) remove part of the cover for better access. That helped a lot!

The long belt stalks in my 2010 Honda Odyssey’s captain chairs proved a challenge. The buckle wound up in the belt path at first, so I had to twist the buckle down. That caused the seatbelt to sit at a weird angle, though, making it hard to tighten. It took more effort than I’m used to to get a good installation, but it did work.

On the other hand, it installed beautifully and with almost no effort in Darren’s 2011 Toyota Highlander.

It also installed easily in the 2014 Hyundai Santa Fe in the second and third row. 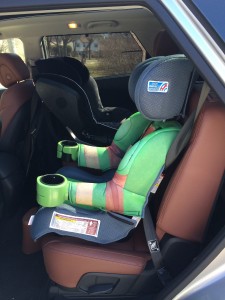 Even though the seatbelts in my Odyssey gave me trouble, the LATCH installation was a breeze. The KidsEmbrace seat has connectors I haven’t seen before. Instead of a push-button they have a little lever that you push up on to release the connectors when uninstalling.  As with the seatbelt install, in some vehicles you may need to partially remove the cover in order to pull the LATCH adjustment strap back through the belt path for more leverage when you pull to tighten it.  Here’s a video showing more about LATCH, including the connectors and how to pull back the cover for easier installation.

The KidsEmbrace manual I have says to discontinue LATCH when “the child’s weight exceeds LATCH weight limit specified by vehicle manufacturer, or 40 lbs, whichever is higher.” Please note, though, that my seat was manufactured before February 27, 2014, when new LATCH regulations went into effect. Going forward, the seat will have a LATCH limit of 45 lbs, child weight only. (You can read more about the new LATCH regulations here and here.)

LATCH use IS permitted when the seat is installed as a booster.

The seat also includes a recline foot. Like most other combination seats that have a recline feature, it provides a small amount of recline that probably won’t make a huge difference for the child, but might help with fitting the contours of various cars. The recline foot is simply flipped forward or backward, and it must be done while the seat is uninstalled. 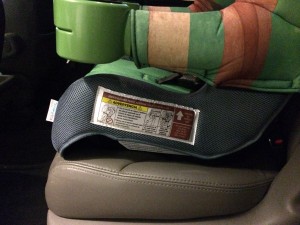 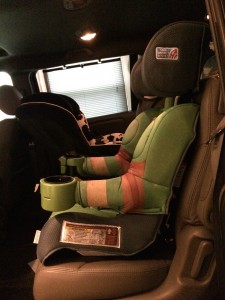 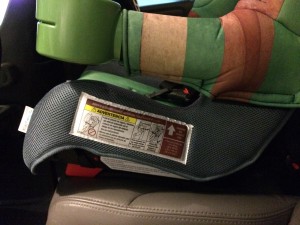 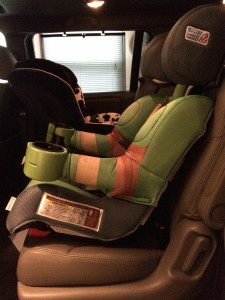 The KidsEmbrace seat is very narrow. At the back of the base, it’s only 14″, which means it could be useful in a tight three-across situation. 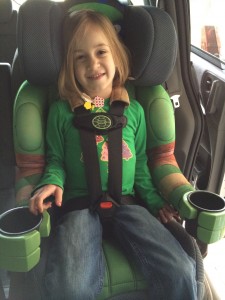 Here’s the amount of space she has left before she is even with the middle set of slots: 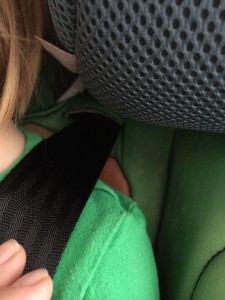 This is my 2-year-old. He’s 36″, 26 lbs, and wears a size 2T shirt. (Please note that my son did not actually ride in this seat. He still rides rear-facing, but I wanted to show the fit on a child his size.) 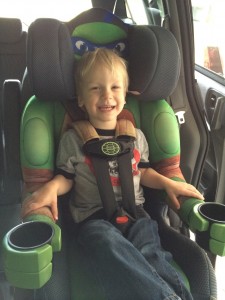 In booster mode, the fit on my daughter wasn’t great. On the lowest setting, the shoulder belt fit well, but the seatbelt kept getting stuck in the guide since it was right against the shell of the seat. When I raised the headrest higher, the shoulder fit wasn’t as good, and I didn’t like the belt fit in either position. Keep in mind, though, that my daughter is still on the small and young side. Since she still fits in the harness, booster mode wouldn’t be necessary for her. 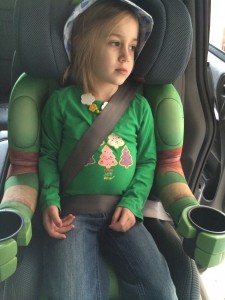 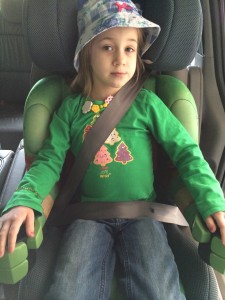 Here is Darren’s son, who is almost 9 years old and 4’6″. As you can see, the belt fits somewhat better on him, but the lap belt isn’t as low as I’d like. He had no problems buckling himself into the car.

The belt guides on the KidsEmbrace are interesting. At first I thought for sure the belt would easily slide out, but it didn’t. (We didn’t use the booster on actual roads, but I did have my daughter wriggle around to test it, and I buckled and unbuckled it several times without issue.) 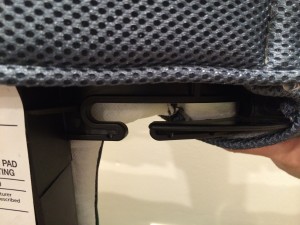 With any booster seat, the size of the child and the particular vehicle can make a big difference, so always be sure to check your child in any car he or she uses.  The similar KidsEmbrace Dale Earnhardt Jr. Combination carseat is an IIHS Best Bet when used as a booster.

My daughter used Leonardo as her primary seat for a couple weeks and really liked it. She didn’t complain about anything except not being able to unbuckle herself as easily as she can in her other seat. (For some people that will be a benefit; for others it might not be.)

The seat has a decent amount of foam and padding, which makes for a comfortable ride. Plus she loved the cup holders, of course.

Tightening and loosening the straps was very smooth. In fact, I first installed the seat just before my husband took our daughter on an errand. I didn’t give them any special instructions–I just put the seat in and let them go. Afterward, my husband said that of all the seats we’ve used for her lately (and there have been a lot–at least six), this one was by far the easiest to use.

I did have a bit of harness twisting here and there, but not nearly as much as some other seats I’ve used. It was easily remedied, but something to be aware of. The crotch buckle has a push-down (rather than push-in) release, which I prefer. Another nice feature is that the buckle tongues pop out automatically when the button is depressed. 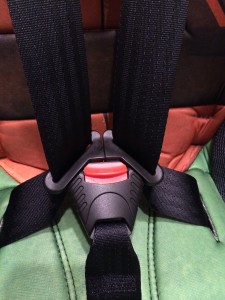 Raising the headrest requires pushing in a nub and then pulling up on the seat, which isn’t as easy as most levers but not terribly difficult, either. 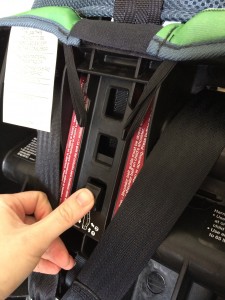 The seat is very lightweight (only about 15 lbs), which would make it a good travel option. 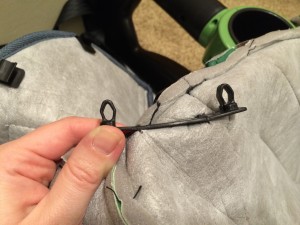 Removing the cover was relatively easy. It’s mostly velcro and plastic tabs, though there are four set of plastic anchors that gave me a bit of trouble. They took some effort to pry out, although sticking them back in was a breeze. When removing the harness, the chest clip was too large to fit through the slots for the hip straps so I had to unthread it from the harness.

The headrest pad should be spot-cleaned and should not be put in the washing machine. The seat pad can be washed in cold water on the delicate cycle. Both should be drip-dried.

The KidsEmbrace is certified for airline use with the harness.

The seat has a do-not-use-after date stamped in the bottom of the seat. In my case, the stamp says not to use after December 2017, which would give my seat a 4-year lifespan. (The date of manufacture is December 27, 2013.)  We contacted KidsEmbrace, and they said that was a mistake that has since been corrected. The lifespan of their seats are 7 years.

KidsEmbrace requires replacement after any crash.

(To be fair, some of these aren’t necessarily problems for every parent, but I list them here to inform potential consumers of specific KidsEmbrace issues)

There’s a lot to like about the KidsEmbrace seat. It’s lightweight, narrow, easy to use, and probably the most kid-friendly seat you’ll find. The harness height isn’t as tall as on many other combination seats, but even so it’s tall enough to get the majority of kids well into an acceptable booster age. This is especially beneficial for people who might not be “into” car seats, but like the characters. The seat might allow them to keep their child harnessed longer than they would in whatever convertible seat the child is outgrowing.

The KidsEmbrace seats can be found at Amazon for around $150 and at other retailers.  This includes the Teenage Mutant Ninja Turtle version along with other combination carseat designs like SpongeBob Square Pants, Batman, Dale Earnhardt Jr. and Dora The Explorer.  Backless booster models include Batgirl, Batman, Superman and Supergirl.

Thank you to KidsEmbrace for providing Leonardo for our review. No other compensation was provided, and all opinions expressed are those of CarseatBlog.