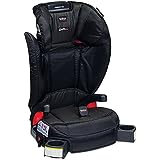 The Britax Parkway SGL is a new version of the popular Parkway SG Booster.  We had a preview of the SGL from our ABC Kids Expo coverage.  It is rated for kids 40-120 pounds.  You can find our full review of the original Parkway SG here.  Using the Parkway SGL in high-back mode with the backrest, it is rated for kids 38-63 inches tall and with a seated shoulder height of 15-21.5 inches tall.  We recommend that kids remain in a child restraint system with a 5-point harness until they are at least 4 years old and 40 pounds, preferably until they are mature enough to remain seated properly in a seatbelt with a booster.  Kids should remain in a booster until they can pass the 5-step test.

Overall, the Parkway SGL is quite similar to the Parkway SG.  The dimensions are all pretty much the same and like the SG, it can be used as a backless booster as well.  The major differences are as follows:

Otherwise, the new SGL is about the same as before in almost all other dimensions.  It really fits pretty close to the same with my son in our minivan and also with my daughter in our Prius.  I can’t see that the changes for the armrest and shoulder belt design will make much of a difference for most kids, but it could make just enough difference for some situations.  So, rather than rehash any more of the Parkway SG review, I’ll just finish with photo comparisons.  The Parkway SGL is pink and is usually on the left side of the photo, except for the top view: 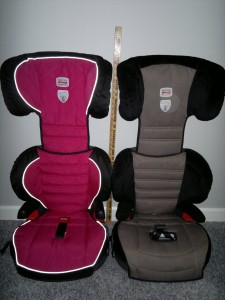 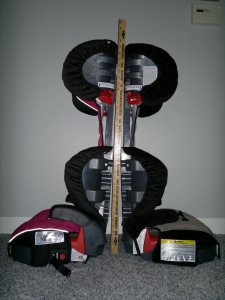 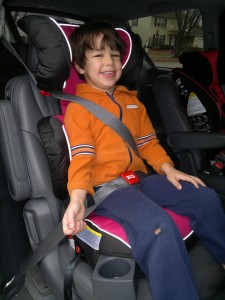 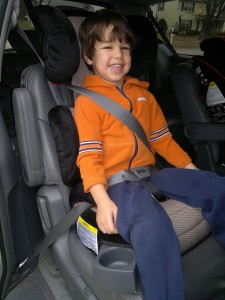 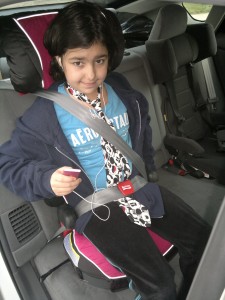 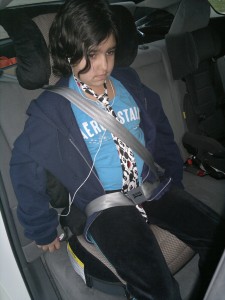 This may be my daughter’s last carseat review 🙁  While she doesn’t yet meet the “5-step” test in all cars, she absolutely, positively meets the much simpler “I am NOT sitting in a booster” test in any car.  At 10 years old, over 4’7″ tall and over 83 pounds, she has probably seen her last booster.  In fact, she probably would fit only in the very tallest ones, like the Parkway.  My son is 5.5 years old, almost 46 pounds and 46″ tall.  Here’s a quick video of him demonstrating the Secure Guard clip:

The Parkway SGL is made in China.  Like various high-back boosters, some assembly is required.  It isn’t difficult, but you should follow the instructions carefully.  Assemble on a flat surface and make sure everything is aligned correctly whenever you attach the back or remove it for backless mode.

Overall, the Britax Parkway SGL is a very nice update to the Parkway SG.  Britax has done a nice job updating many of their products within a year or two, partly in response to suggestions from parents.  The tall height and unique Secure Guard feature make it a very good choice for a high-back booster, plus it converts to a backless booster as well.  LATCH is a handy feature that sets it apart from many other boosters.  The Parkway SG was an IIHS “Good Bet” and due to the similarities, I expect that the Parkway SGL will be rated as just as good.

The official link for the Parkway SGL at the Britax USA website can be found here.  The review sample shown in the photos was supplied by Britax USA.  Beyond providing the retail sample, no money or other type of compensation was provided and no content was submitted for inclusion in this review.