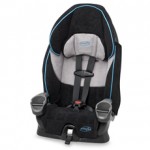 On Friday, October 15, 2010, Evenflo announced a voluntary recall of certain Evenflo Maestro combination harness/booster seats sold in the US and in Canada.  The recall pertains to all models that were manufactured between 11/24/2009 (inception) and 4/9/2010 in the US.  If you have a Canadian Maestro model – the recall period is 12/17/2009 thru 4/26/2010.  Any models made after the recall period are not affected by this particular problem and we should consider those units safe to use unless we receive information to the contrary.

Before I go into any further details, I just want to take this opportunity to point out the necessity of registering your child restraint products – either by mailing in the completed registration card that came with the seat or by registering it online through the manufacturer’s website.  If you don’t register your carseat or booster, or if you forget to update the registration address when you move, there’s a good chance you could be left in the dark if there’s ever a recall.

Also, here’s a tip for any CPS coalitions or programs who may prefer to be responsible for mailing in the product registration cards when they have a new seat installation – do it online.  Have you noticed how illegibly some people write?  There have been plenty of instances where I’ve looked at the completed registration cards and I just know that the poor data entry person employed by the CR manufacturer has absolutely no chance of inputting that person’s name and/or address correctly.  And obviously, if it’s not in the system correctly then the parent/caregiver isn’t going to receive the necessary information regarding a recall.  So, if at all possible, take a few minutes after your check event or appointment to get online and register the products yourself on the CR manufacturer’s websites.  Have the check forms handy too in case you need to double-check a name or address spelling.  Some manufacturers require you to list an email address in order to process the online registration – if you don’t have one for the parent/caregiver but it’s a “required field” – just make one up.  ka1&he%fr57tp4uvf@hotmail.com or some similar abstract combination of letters, numbers and punctuation will always work and it’s unlikely to be a valid email addy.  Some CR manufacturers (like Evenflo & Dorel) don’t require an email address in order to submit the registration info which is nice.

Okay, now back to the Maestro recall.  Here’s the info currently available from Evenflo:

Miamisburg, OH , October 15, 2010 – Evenflo Company, Inc. today initiated a voluntary safety recall of certain Maestro Combination Booster Seats to address a crack that occurred in certain laboratory tests simulating a high-impact, frontal collision. There have been no reports of this crack occurring in the field and no injuries have been reported. In the U.S., the initiative involves 13,792 seats with model numbers that begin with “310” that were built between November 24, 2009 and April 9, 2010. In Canada, the initiative involves seats with a model number that begins with “310” that were built between December 17, 2009 and April 26, 2010. Maestro child restraints built after April 2010 are not affected by this action.

Evenflo is proactively initiating this action to address an issue first observed at an independent test laboratory in late September.

Evenflo is sending a consumer notice to registered owners of the affected seats to apprise them of the action and all units will be removed from shelves. The company will make available an easily installed bracket to reinforce the seat. Owners are urged to visit the Evenflo.com consumer website for more information and are encouraged to pass along information to their friends and neighbors.

The seat should not be used with children weighing under 40 pounds without the repair bracket. Children who weigh more than 40 pounds can continue to use the seat as a belt-positioning booster until the remedy kit arrives.

The company requests that purchasers of affected Evenflo Maestro seats contact Evenflo for a free reinforcement kit by calling (in the U.S.) 800-233-5921 and (in Canada) 800-265-0749 between 8 am and 5 pm ET. Customers are urged to not return seats to retail stores where purchased.

“Evenflo is very proud of its 85-year record of safety,” said Lindsay Harris, Vice President, Corporate Engineering and Quality at Evenflo. “Despite our best efforts, sometimes issues arise even after products have been rigorously tested. Evenflo’s testing has demonstrated the effectiveness of the reinforcement bracket at levels greatly exceeding the already-severe federal requirements. No other Evenflo car seats have experienced similar damage,” he said.

Video from Evenflo showing the recall fix and how to secure it:  http://www.evenflo.com/corporate.aspx?id=530

Component: CHILD SEAT
Potential Number of Units Affected: 13792
Summary:
EVENFLO IS RECALLING CERTAIN MAESTRO CHILD RESTRAINT SYSTEMS WITH MODEL NUMBERS BEGINNING WITH 310 AND BUILT FROM NOVEMBER 24, 2009, THROUGH APRIL 9, 2010. THESE SEATS FAIL TO CONFORM TO THE STRUCTURAL INTEGRITY REQUIREMENTS OF FEDERAL MOTOR VEHICLE SAFETY STANDARD NO. 213, “CHILD RESTRAINT SYSTEMS.”
Consequence:
IN THE EVENT OF A CRASH, A CRACK MAY FORM AT THE FRONT OF THE SEAT ADJACENT TO THE HARNESS ADJUSTER CAUSING THE CHILD NOT TO BE ADEQUATELY RESTRAINED, INCREASING THE RISK OF INJURY.
Remedy:
EVENFLO WILL PROVIDE OWNERS AND CARE GIVERS A REINFORCEMENT PLATE ALONG WITH REPAIR INSTRUCTIONS FREE OF CHARGE. THE SAFETY RECALL IS EXPECTED TO BEGIN DURING OCTOBER 2010. OWNERS MAY CONTACT EVENFLO TOLL-FREE AT 1-800-233-5921.
Notes:
OWNERS MAY ALSO CONTACT THE NATIONAL HIGHWAY TRAFFIC SAFETY ADMINISTRATION’S VEHICLE SAFETY HOTLINE AT 1-888-327-4236 (TTY 1-800-424-9153), OR GO TO HTTP://WWW.SAFERCAR.GOV .

In tests conducted at an outside laboratory, Consumer Reports found that two of the Evenflo units failed when the seat’s plastic shell cracked and the harness loosened in our simulated 30-mph frontal-impact crashes.

Both failures came when the seat was being used with its five-point harness; we found no problems in booster-seat mode. And the two units that failed were manufactured in December and February, respectively, well before the April 2010 cutoff date for the recall (photo, below right). Later production units, those made after April and not subject to the recall, included certain design modifications and passed our tests.

FYI – I’ll have a recalled Maestro to compare with a newer, non-recalled model later today and I’ll post a follow-up on the topic after I inspect them both and take a few pictures. We’re also working on trying to get some additional information to share with our readers.  Personally, I’d like to know what specific changes were made to the product in April.  I’m also interested in hearing thoughts or comments on why this problem didn’t show up in the initial FMVSS 213 testing that was most certainly done by Evenflo before the product was released.  And finally, I think it’s fair to ask, *if* the need for reinforcement in this area of the shell was a known issue 6 months or more ago – why did it take until now to announce the recall?  Most of our regular blog readers are passionate CPS Techs and Advocates and they understand that recalls are part of the nature of this business and that no manufacturer is immune to them.  However, many of us (myself included) believe that how a company handles and responds to a recall issue is often more important than the recall issue itself.

UPDATE:  Here are pics of the underside of the 2 Maestro models that I had access to today.  The top picture is a recalled model, DOM 4/8/2010.  The bottom picture is of a model not affected by the recall and has a DOM of  6/21/2010.  On the recalled model you can see the metal bottom of the front harness adjuster mechanism.  On the post-recall model pictured below, that area has been mostly covered in additional plastic (but you can still see a sliver of the metal underneath).  We’re also aware that there may be slight variations in the reinforcement of early post-recall Maestro models so if you have a model that was made after 4/9/10 but it doesn’t look exactly the way the one pictured below looks – don’t worry, it’s still okay. 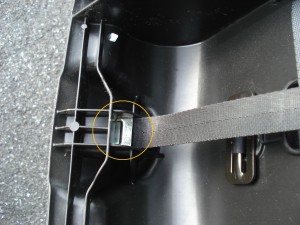 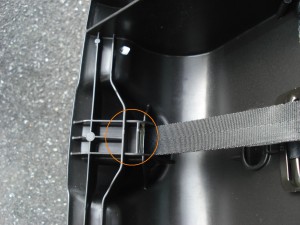