We know most minivan shoppers will be interested in the hybrid powertrain now standard on the 2021 Toyota Sienna.  It delivers up to 36 mpg and offers an AWD version that achieves an impressive 35 mpg as well.  In terms of safety, we appreciate that Toyota now includes Blind Spot and Rear Cross Traffic warnings standard, along with a host of other active crash avoidance and safety features.  Since it is brand new and just arriving at dealers, we don’t yet have any crash test or safety ratings available from the NHTSA and IIHS.  This preview, however, is focused on some other improvements in the area of child safety seat compatibility. 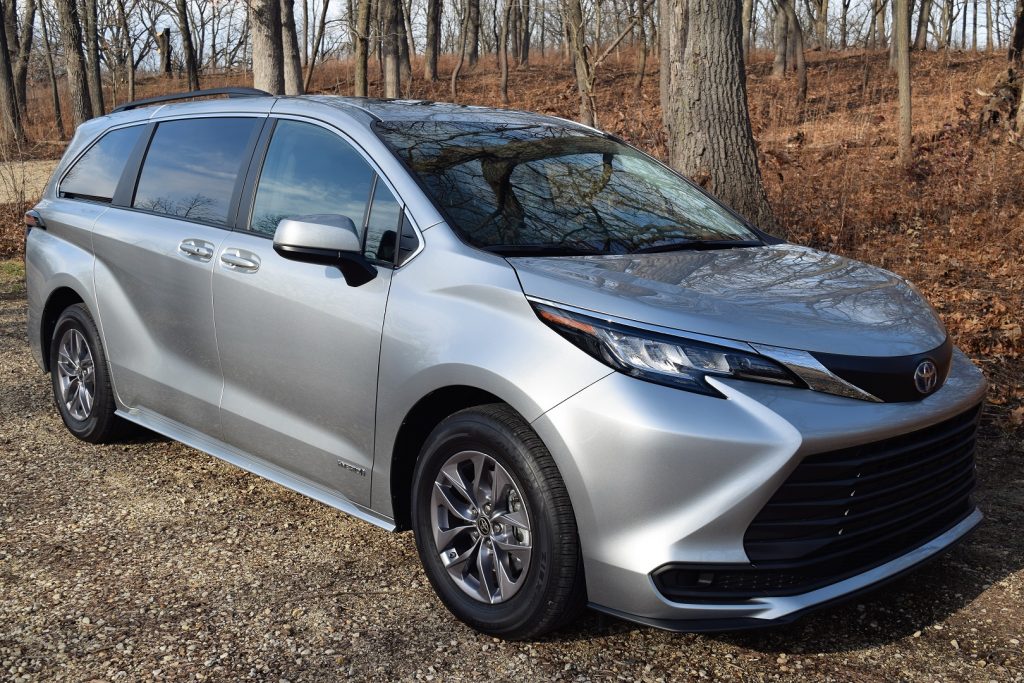 Highlights for the Second Row:

In the 8-Passenger LE and XLE trims, the 2nd row has a smaller middle seat between the captain’s chairs that can be removed or stowed on the side of the cargo area.  This seat is now equipped with LATCH for 2021, an improvement from the 2020 and earlier model.  It is wide enough to fit many carseats, but wider ones will restrict folding of the captain’s chairs. 7-Passenger trims do not have the middle seat, but do have a super long-slide, allowing the captain’s chairs to move farther fore and aft.  Some trim levels of the 7-Passenger models also offer an ottoman feature with a leg rest in these chairs.  The second-row captain’s chairs cannot be removed like the 2020 model in any trim level.  Also, while they can slide forward with a LATCH-installed carseat for decent 3rd row access, they do not also pivot with a carseat installed, like in some other vehicles for a slightly larger opening. 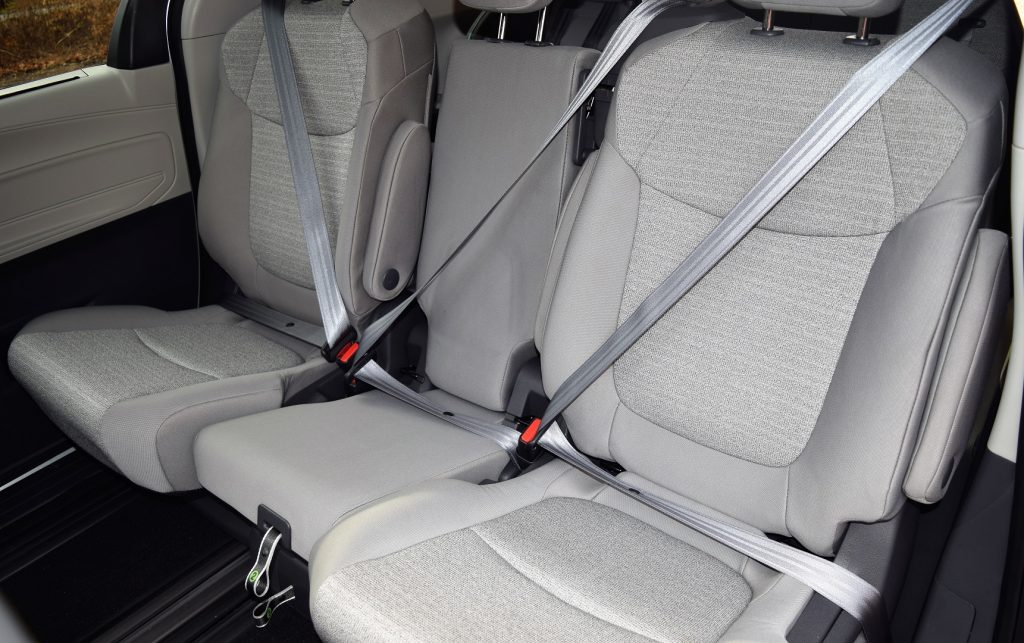 The middle seat has a seat-mounted shoulder belt.  All three seats have removable head restraints.  The buckle stalks are rigid but are not too long or mounted too far forward to be an issue for most car seat installations.  Overall, there should be good compatibility and various combinations of 3-across should work in the second row.  Narrower carseats installed in the middle seat will even allow the passenger side captain’s chair to fold and move forward for third-row access, such as the Diono Radian or the Nuna PIPA Lite R shown in this video:

Highlights for the Third Row:

The third row has a new arrangement of five LATCH anchors.  There is a dedicated pair of lower anchors for the passenger side, as before.  New for 2021 is a pair of anchors for the driver side as well, plus a 5th anchor that gives you the option to use the lower anchors for installation in either the driver-side seat OR the middle seat (but not both at the same time).  The middle seat anchors are slightly offset to the driver side, so installing a LATCH car seat in the middle will likely mean you lose the ability to have a passenger or car seat on the driver side at the same time.  Even so, this is a more flexible arrangement than in the outgoing 2020 model.  Shown below are a Graco Nautilus Snuglock LX and Graco 4Ever, highlighting the new driver side lower anchor location. 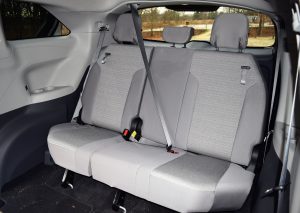 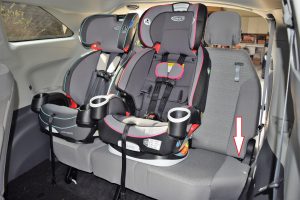 The passenger side seat is wide enough that many car seats will fit there and still allow the 60 section on the driver side to fold.  The center seat is quite narrow and has a ceiling mounted shoulder belt.  The minimal width will make it difficult to install typical car seats there using the seatbelt, and like most minivans, it will be challenging to install 3-across car seats in the third row.  Three passengers could certainly fit, especially combinations of tweens and older kids in narrow boosters.  The center head restraint is removable, though the outboard ones only fold.  Fixed head restraints can be a compatibility issue with taller car seats and boosters, but these do not seem to protrude enough to be problematic in most cases.  The buckle stalk for the passenger side seat is rigid and is well forward of the seat back.  This could present some difficulty with certain car seats installed with the seatbelt there.  There are top tether anchors for all three seats in the second and third row.

The third row is still far more comfortable and flexible than any midsize SUV.  Cargo space is also more generous, both with the third-row seat folded or in use.  The 2nd row center seat stows away on the left side of the cargo area when not in use, providing an aisle for access to the third row.

The owner’s manual notes that V-shaped top tether systems (Britax) may not be used in the center seating positions of the 2nd or 3rd row seats.

I do not lament the slight loss of acceleration in the hybrid powertrain compared to previous models or competitors.  This is, after all, a family vehicle that will not be used on the track.  The big gains in fuel economy more than offset the fraction of a second lost speeding up between stop signs around town.  The engine is still more than adequate for everyday acceleration requirements, even if it lacks a little of the pep or smooth sound of last year’s V6. 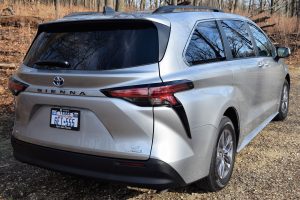 The improvements in terms of flexibility for child safety seat installations are well-received.  Top IIHS and NHTSA ratings will definitely put Sienna in the same league as the Honda Odyssey, and a contender for our favorite minivan for car seats and the safest 3-row vehicle for 2020-2021.  The fit & finish and feature set are also quite competitive, even for a pre-production vehicle.  Fuel economy is a standout, I averaged just below the EPA rating of 35 mpg around town, just above on a highway trip.  That’s simply amazing for a 4600+ pound, 17-foot long family truckster with all-wheel drive.

The front-end styling is a matter of taste, but it is definitely distinctive and will catch some attention, especially in the XSE trim (below).  The LE 8-passenger trims are a solid value with a full array of safety features, while the Limited and new Platinum trim with super long slide 2nd row heated ottomans will keep older kids and grandparents in comfort on long road trips.  Swagger wagon, indeed!

EDITOR’S NOTE: The Toyota Sienna LE for this preview was provided by Toyota as a pre-production model.  Details may change from this preview and video compared to retail models.  No other compensation was provided, and all opinions are those of the author.