Oh HGTV, you’ve done it again. Anyone who regularly watches your shows knows about the poor seat belt use shown in your various programs. We watch for the personalities and eye candy—why hello, Property Brothers, I’ve got a room or two for you to make over 😉 and hey, if you ever have kids, I’m local if you need carseat help. But yesterday as I was stuck on the couch recovering from a broken patella, I watched a new makeover show that demonstrated the depths of seat belt misuse. 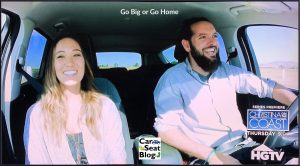 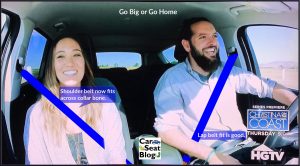 I’m baffled at why the stars of this new show, Go Big or Go Home, decided to place the shoulder belts behind their backs. This left them only secured by the lap belts of the seat belts, which in their state, California, is considered a misuse by law. In the event of a crash, they would jack knife in half going full force into the frontal airbags since they have no upper body restraint. Ask anyone who’s been in a crash where the airbag has deployed, but it’s not comfortable even wearing a shoulder belt to be hit by an airbag going over 150 mph. If you haven’t had your recalled Takata inflators replaced yet and are driving an older model Honda, you may also be hit by shrapnel. Then you might also suffer the indignity of being issued a ticket for wearing your seat belt incorrectly.

Later on in the show, the stars were shown wearing their shoulder belts, but the fit of the seat belt on the woman was incorrect. This is a common problem. How could she have fixed it? There are a couple of simple things she could have done and maybe these are things you can do to help your seat belt fit you too. 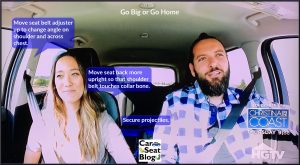