A newly released study by Emma Sartin, PhD, MPH, CPST, highlights the need to keep less mature children in harnessed carseats versus moving them to a belt-positioning booster. While NHTSA allows an age range for a child to move to a booster seat, best practice guides us to place more of an emphasis on maturity. A wiggly child just isn’t safe in a seat belt and booster seat. 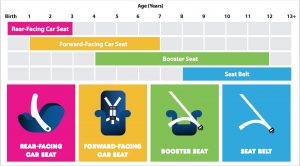 Dr. Sartin observed 50 mothers and children aged 4-8 on simulated drives. Fourteen children were in harnessed carseats while the other 36 were in belt positioning boosters. The driving simulator had a camera to record the children on the simulated drives and showed what parents of small children already know: the 4 year olds spent the largest amount of time out of position. But how bad was that number?

4 year-olds: These kids spent an average of 67% (that’s 2/3 of the ride) inappropriately restrained. Errors in restraint seen included moving forward or sideways, placing the shoulder belt behind the child’s back, and lifting their bodies out of the booster.

5-8 year-olds: These kids, some just a year older than the youngest group, spent more than 70% of their time in boosters sitting properly. This means less than 30% were making errors like moving out of the shoulder belt and wiggling.

We know child behavior is as individual as the child himself and this study confirms it. Generally 4 year-olds are not mature enough to ride safely in a belt-positioning booster. There will always be the exception, and as parents, we like to think our children are ever the exception. However, we need to understand that there can’t be more exceptions to the rule than the rule itself.

The problem comes for young children who have outgrown their harness, either by weight or height. Higher weight (over 65 lbs.) options are not available anymore due to testing reasons (it’s really hard to get a harnessed seat to pass with that large, stiff 10 year old dummy that weighs 72 lbs.). So then the best restraint option may come down to a booster seat, or a vest, which isn’t as easy to use as a booster.

The best advice we can give to parents looking to move their children to a belt-positioning booster is to do so when the child can reliably sit properly in the booster. That means no wiggling, no stretching for toys or devices or drinks, no leaning forward, and no moving the shoulder belt off the shoulder. Harnessed carseats are for older kids too and keep them safe because they let kids be kids without putting their safety in jeopardy. 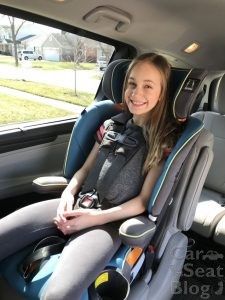