The 2019 Toyota RAV4 is an all-new update to the very popular outgoing model that was the #4 best-selling vehicle in the USA, behind the full-size Chevy, Ford and Dodge pickup trucks.  Gone is the cute, stylish exterior that is so common in the compact utility market.  Thankfully, rather than go with the “gaping maw” design of other Toyota and Lexus vehicles, the RAV4 instead has a take on the off-road capable 4WD 4Runner.  Though the emphasis with the RAV4 Hybrid is fuel economy rather than off-road prowess, it still looks more rugged than before, especially in the exclusive XSE trim with blue accents along with a black roof, trim and wheels.

In terms of crash avoidance, the RAV4 has all the essentials standard.  Toyota has been the leader including systems like automatic emergency braking on even the lowest trim levels of almost every model.  Some other brands still only include these features on top trim levels and then make you buy a pricey technology package on top of that, making them expensive if you can even find them on dealer’s lots.  Blind Spot Warning and Rear Cross Traffic Alert are optional on the base LE trim, but standard on other trims.  Have a problem on the road?  Toyota’s Entune 3.0 includes a 3-year subscription to Safety Connect on all trims, allowing for calls for emergencies, roadside assistance and automatic crash notification in case of airbag deployment.

As for crashworthiness, the RAV4 AWD did quite well.  It aced every crash test from the IIHS, with “Good” overall and Good sub-category results in each one, including the newer passenger-side small overlap crash test.  Its forward collision warning and autobrake system earned the top “Superior” rating.  The only blemish is a “Marginal” headlight rating, mainly due to inadequate illumination in gradual curves.  Unfortunately, this kept it from receiving a “Top Safety Pick” award, which is a shame given its excellent performance in all the actual crash tests and front crash avoidance system evaluation.  RAV4 Hybrid received a 5-star overall rating in the NHTSA safety evaluation.  The 4-star frontal crash test driver-side rating was the only blemish there.

In terms of carseats, the second row is a big improvement from the previous RAV4.  There is now minimal “crossover” of seatbelts that often prevented the middle and outboard seats from being used simultaneously for adjacent or “3-across” car seats.  The middle seat is still relatively narrow, but just wide enough to fit a narrow car seat like a Britax Emblem, Clek Fllo, BubbleBum or Harmony Youth Booster.  The seatbelt anchor for the center seat is just behind the buckle stalk of the passenger side seat, so it is technically possible to install adjacent seats if you can find two that will fit properly next to each other. 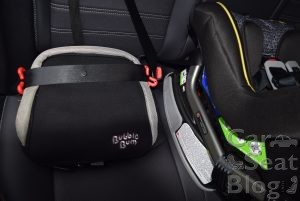 Getting three carseats in the back will be possible, but also challenging compared to a midsize or larger vehicle.  The LATCH anchors are readily accessible, and Toyota does allow “borrowing” in this vehicle of the innermost anchors from the outboard seats to install a child safety seat in the narrow middle seat, but only if permitted by the child seat manufacturer.  Rigid LATCH carseats are not allowed to use LATCH in the middle seat in this manner. In the RAV4, seatbelt installation is still preferred for the center seat, however, because using the LATCH anchors for the middle seat may conflict with having a car seat or passenger on either side. 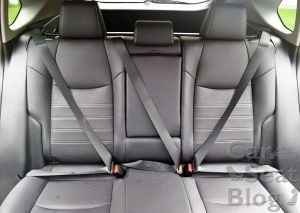 The seatbelt buckle stalks are relatively short/flexible, and the head restraints are all removable in all three rear seats, so there are no major obstacles to good carseat installation in most situations. The seat cushion bolsters and center seat “bump” are not so pronounced to cause issues for most carseats.  Toyota does require that the vehicle seat backs for both sides must be reclined to the same setting when installing a car seat in the middle seat.  The only real challenge will be finding carseats that fit the narrow middle seating position to allow for installation of adjacent or three-across carseats.  For example, a narrow booster can be used in the center, like a BubbleBum shown below between a Graco Nautilus SnugLock and Britax Emblem.  While it fits, the narrow middle seat may make it difficult for a younger booster rider to buckle themselves. 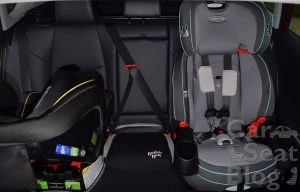 Outside, the appearance may give the impression of being able to climb mountain trails, but the AWD system is not going to be as capable as that found in some other compact utility vehicles.  That includes the higher trim models of the standard gasoline RAV4 with Dynamic Torque Vectoring.  That system uses mechanical clutches that can send more power more quickly to an individual wheel that has traction.  Though the hybrid RAV4 has more power (219 hp) and low-end torque overall, the rear axle is limited to the 54 hp and 89 ft-lbs. of torque supplied by the rear electric motor that drives it.  Though there is no limited slip differential, a trail mode optimizes the traction control braking system to limit wheel slip.  I did not have the opportunity to take the RAV4 on snow or trails, but other reviewers claim that updated software, hardware and an 8.1″ ground clearance make it more capable on slippery roads and light off-road situations than its predecessor. 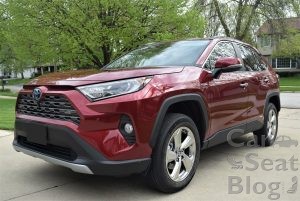 Overall, it should be much more capable in low traction conditions than the 50 mpg Prius AWD-e I reviewed recently, but of course it’s also not nearly as fuel efficient. Fuel economy is still impressive for an AWD vehicle, with an EPA combined 40 mpg (41 city/38 highway).  Over nearly 300 miles of highway driving, my trips averaged 39-42 mpg each.  The aerodynamics really seem to take a hit above 70 mph, so if you regularly drive that fast on freeways, you can expect closer to EPA estimate of 38 mpg highway.  In almost 150 miles of mostly suburban driving, I managed 44-50 mpg in very good weather conditions. Summer will take a slight toll with AC use and winter will be significantly worse with cold temps and heater usage.  The Nickel-Metal Hydride battery should provide better cold weather performance compared to lighter and more compact Lithium-Ion designs.  The battery is smaller than before and entirely under the rear seats, so there is a bit more cargo space for 2019.  Acceleration is there when you need it, too, with 0-60 times under 8 seconds.  The displays are easily customized, but I wished they had taken the easy step to include a permanent analog or digital hybrid battery gauge on the driver’s displays, such that it appeared no matter what you had chosen for the center multi-information display.

The interior was reasonably spacious for the category and I had no comfort issues on long highway drives.  My only nitpicks while driving were the unusual routes and estimated trip times often provided by the navigation system.  Finding the broken location pin icon to stop the guidance was a challenge initially, but I used it often to opt for Google Maps or Wayz guidance.  Sadly, there is no Android Auto to mirror your phone’s navigation. The optional JBL speaker system is above average for factory audio.  I measured the response of the smallish subwoofer in the rear cargo area to put out moderate sound pressure levels down to 40 Hz, but it cuts off rapidly below that.  Cargo space is good for a CUV and the 60/40 bench seat folds almost flat for more space.  Just enough room for a college dorm move-out!  A cargo cover is standard on most trims except for the LE trim where it adds $90 to the Blind Spot Monitor package. Top tether anchors are easily located on the backs of the rear seats.  A full diameter compact spare is under the floor, and the floor panel can be reversed from carpeting to a more durable plastic. 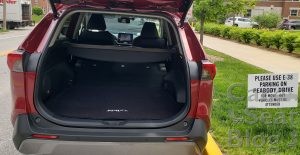 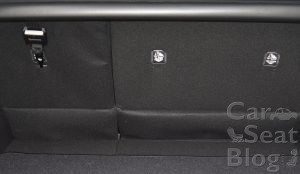 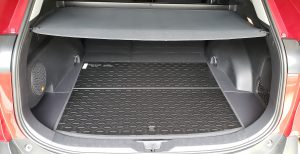 I could cite the lack of heavy-duty off-road capability as a drawback, since there is no way to lock the axles or even an automatic limited slip differential.  To be honest, if you’re buying a hybrid mainstream CUV, you’re probably wanting fuel economy and enough traction to help get going in snow, ice and slippery conditions.  The AWD system in the RAV4 hybrid provides exactly that.

It seems that the trend for most fuel-efficient hybrids and electric vehicles is to be sleek and futuristic.  The 2019 RAV4 Hybrid bucks the trend with more rugged appearance while offering an amazing 40 mpg with standard AWD and modest off-road capability.  In terms of safety, all trims get standard autonomous emergency braking and a 3-year subscription to Toyota Safety Connect.  What’s it cost?  For value, we recommend the base LE trim with optional Blind Spot Monitor and Rear Cross Traffic Alert for just over $28,000 MSRP, just in case something isn’t seen behind the largish rear pillars.  Those features are standard on all other hybrid trims, and those in colder climates may opt for the XLE with Convenience + Cold Weather Package for just over $31K MSRP, giving you heated seats & steering wheel, power driver seat & liftgate plus windshield wiper de-icer.  The XSE and Limited trims offer a lot more creature comforts, but the price also goes up considerably, making the value lower for those with an emphasis mainly on safety.  Overall, the 2019 Toyota RAV4 Hybrid is a great choice to reduce fuel use and emissions while still being able to get a small family safely to their destination through slippery or snowy roads.

Thank you to Toyota and DriveShop for the loan of the RAV4 Hybrid Limited used in this review.  No other compensation was provided, and all opinions are my own.