Fundamentally unchanged since the 2016 model was introduced, the 2019 Toyota Prius receives a minor refresh this year.  The front and rear styling is updated somewhat and perhaps not quite as futuristic as before.  That may be good news for those who don’t care for the new Corolla Hybrid’s styling.  There is a new AWD version, notable with its standard fog lights, two tone wheel covers and AWD badge on the rear hatch.  The interior is basically unchanged from 2018.

The AWD system brings with it a new Nickel Metal Hydride battery that Toyota claims will perform better in cold climates.  The rear axle has a separate electric motor that kicks in at low speeds only.  There’s only 7 hp in the back, so just enough to help with grip on slippery roads.  There is no off-road capability here.  I did not have the opportunity to test the AWD system in snow, but it performed admirably in heavy rain and standing water.  That small rear motor is always working up to 6 mph in all conditions, but only when necessary beyond that until 43 mph.  Overall performance is otherwise similar to the FWD trims. 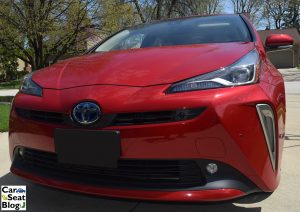 There’s barely a fuel economy penalty, as the AWD model is rated at 50 mpg combined vs. 52 mpg combined for the same trim in the FWD version.  That’s only the equivalent of less than one extra tankful of 11.3 gallons each year for someone who drives 12,000 miles annually.  I obtained a very respectable 64 mpg for over 200 miles around suburban Chicago.  Of course, I do not expect those kinds of results year round, particularly in winter when cold temps and use of the heater reduce fuel economy considerably.  The only real drawback seems to be the premium of $1400 on the LE trim or $1000 on XLE models.

As for car seats, like any small car, it has some challenges. There’s limited room in back, so an infant or rear-facing only carseat will likely reduce front seat legroom, as is the case in almost every compact sedan and utility vehicle.  Also common among small cars, the center seat is quite narrow, and it will be difficult to find a car seat that fits there.  In the Prius, the middle spot is likely only usable by a slender teen or pre-teen; many carseats will simply not work with the narrow seatbelt system attachments there.  Three across carseats will be a major challenge, as I could not find a combination that worked well, though it may be possible.

Fortunately, I had no issues fitting two carseats in the outboard seating positions.  The LATCH system is easy to locate and use in those seats.  Installation of various carseats was relatively straightforward; the short buckle stalks and removable head restraints were appreciated.  I was able to install various models with no issues, including a Graco Nautilus SnugLock, Chicco MyFit, Britax B-Safe 35 and Cosco Scenera NEXT. Narrower models may allow a slender young adult to sit between on short trips. 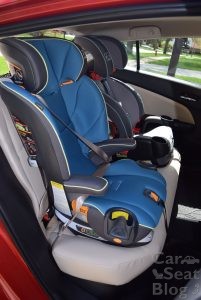 Toyota Safety Sense P is standard, including Automatic Emergency Braking.  That means every single Prius on a dealer’s lot will qualify for an IIHS Top Safety Pick award.  Many other brands only include these features on top trim levels with pricey advanced technology options packages, meaning many actual vehicles would not even qualify for the IIHS award.  We recommend the LE trim level, as it also includes blind spot and rear cross traffic alerts standard (not available on the 56 mpg L Eco trim).  Prius also earns a 5-star overall safety rating from the NHTSA, despite some lower ratings in individual crash tests.

I could have included the lightweight AWD system as a drawback, but let’s be honest.  You’re buying the Prius for fuel economy.  The vast majority of us don’t go off-road anyway, we just want to be able to get going when snowy, icy or otherwise slippery roads make it more difficult.  The Prius AWD-e system delivers just that, without a major fuel economy penalty.

For just over $26K MSRP, the Prius LE AWD-e provides solid performance on slippery urban and suburban roads along with a host of standard active crash avoidance features.  Our XLE AWD-e tester added various additional creature comforts and styling accessories.  Top overall safety ratings from the IIHS and NHTSA and good handling make it a safe choice for a commuter or small family.  The standard frontal crash warning and automatic emergency braking mean every single Prius on a dealer’s lot will be a great choice and qualify for an IIHS Top Safety Pick award.  A standard backup camera (all trims), blind spot warning and rear cross traffic alert (LE trims and above) mitigate the mediocre rear visibility.  Plus, you get an amazing 50 mpg overall along with AWD to help in slippery conditions. 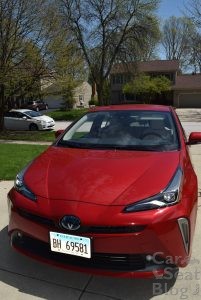 Thank you to Toyota and DriveShop for the loan of a Prius XLE AWD-e used in this review.  No other compensation was provided and all opinions are my own.