Five years ago, Consumer Reports implemented a new, more rigorous crash test for carseats and started releasing their ratings to subscribers. CR’s goal in creating the new test wasn’t to recreate the wheel. We know every carseat on the market here in the U.S. must be able to pass a basic frontal crash test (Federal Motor Vehicle Safety Standard No. 213), therefore we consider all carseats on the market to be “safe” because they can all pass this baseline test. However, we also know that all carseats are NOT created equal and it would be naive to assume that they all provide exactly the same levels of protection.

Consumer Reports set out to find which seats provide additional margins of safety, above and beyond FMVSS 213, and so they developed their crash test to be more rigorous than the federal standards. Their crash test ratings scale will indicate a “BASIC,” “BETTER,” or “BEST” rating to indicate how well the child restraint performed as compared with the rest of the seats in that “peer group” category. One main focus of this new crash test is head protection, since head injuries are very common in crashes, even among properly restrained children. 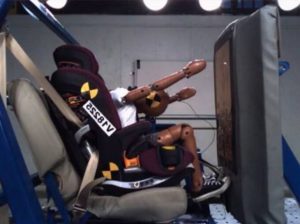 The seats tested in this round are considered “combination” seats (a.k.a, harness booster, harness-2-booster or toddler/booster seats). Combination seats are forward-facing only seats that have a 5-point harness but can also be used as a booster once your child outgrows the harness. Combination seats are “Stage 3” seats, most appropriate for preschool and school-age children who have outgrown their rear-facing convertible seats. 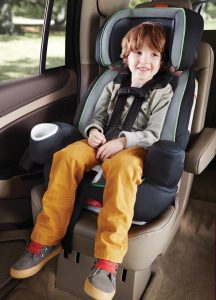 We were already aware that there were issues with certain combination seats that they tested in this round. The Britax Frontier ClickTight Harness-2-Booster, Britax Pioneer Harness-2-Booster, Cosco Finale DX, and Harmony Defender 360 all experienced some sort of structural damage during this very challenging crash test. Please see our previous article on the subject for more detailed information on what went wrong during testing of these seats. Now that we have the full ratings, we know that the Graco Atlas was also downgraded to a BASIC Rating after experiencing some structural damage during this test.

All of Consumer Reports’ crash testing is performed at an independent, outside testing facility. The test utilizes a contemporary vehicle seat (2010 Ford Flex 2nd row seat) with a floor below it, unlike the government test which has a 70’s era back seat bench with no floor. There’s a “blocker plate” (pictured right) installed in front of the test seat to simulate the front seat in a vehicle. The blocker plate is intended to recreate the interaction that happens in real life crashes when the child (or a rear-facing carseat) interacts with the back of the front seat. In addition, the speed of this test is set at 35 mph (instead of 30 mph which is standard in FMVSS testing). Those who follow vehicle ratings will recognize the 35 mph speed as the same speed used to crash new vehicles in the NCAP program. CR’s new crash test applies 36% more energy to carseats than their old test protocol and a more severe test results in a greater distinction among carseat performance.

In this round, Consumer Reports crash tested 23 combination seat models with various dummy sizes, using LATCH or a 3-point lap/shoulder seatbelt as required depending on the weight of the dummy being used. Several combination models that received a “BEST” rating for crash protection are also some of our favorite budget-friendly seats, the Evenflo Maestro Sport and Evenflo Evolve/Transitions/SafeMax. 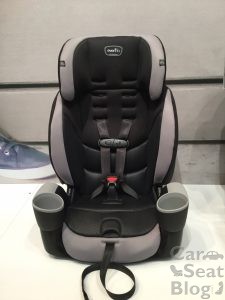 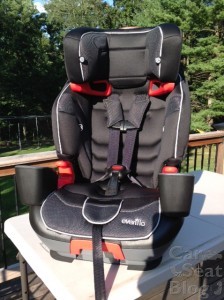 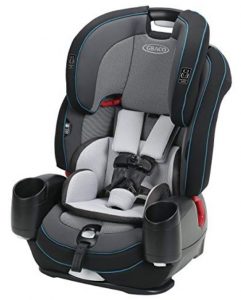 The new Graco Nautilus SnugLock LX was the top overall performer in terms of their overall score. Here at CarseatBlog, we agree with this assessment. The new Nautilus SnugLock LX is an awesome combination seat with excellent features and it deserves its place at the top of the ratings even though it received a BETTER crash protection score (not a BEST rating as we would have preferred to see). Still, a BETTER rating for crash protection in this very demanding test is perfectly acceptable in our opinion.  The SnugLock LX has also been one of CarseatBlog’s Recommended Carseats and an Editors’ Pick.

On a separate note, we feel the need to caution our readers that the combination seat with the second-highest overall rating is a seat that we would never recommend under normal circumstances. Although we’re happy to see any seat perform well, the Cosco Highback Booster Car Seat is not a bargain for most families despite the low price tag. The Cosco Highback Booster seat is only rated up to 40 pounds with the 5-point harness and most toddlers outgrow it even before they reach that weight because the top harness slot height is so low. If you need to replace it after a year because your preschooler outgrew it, then it wasn’t really a bargain – know what I mean? If you’re on a limited budget and looking at combination seats for kids who are at least 2 years old, you’d be much better served by the similarly rated Evenflo Maestro Sport which is a lot taller and rated to 50 lbs. with the harness.

Subscribers to Consumer Reports can see the complete ratings for all car seats HERE.