Home
Conference/ABC Expo/JPMA
Kioma: The Infant Carseat of the Future?
Tweet Pin It

As we were walking the halls of the 2017 JPMA Baby Show in Anaheim, something caught our eye. It was a vaguely egg-shaped contraption that looked like a carseat but was so different from a carseat that we weren’t sure. We went over for a closer look and were introduced to Kioma, an innovative rear-facing-only infant seat.

We had a nice long chat with Kioma’s Christopher Gay about the seat. Right now the seats are still early prototypes, so things can still change, but Gay is confident they’re close to being able to move to production. Here’s what we know so far.

The seats are made of carbon fiber, meaning they’re extremely lightweight. The carrier weighs 5.5 pounds, although it felt even lighter than that. 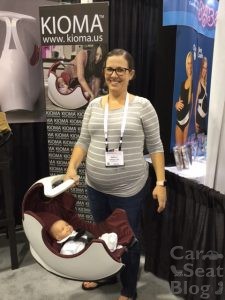 The unique handle felt ergonomically correct and less awkward to carry than a standard infant seat, although we weren’t able to test with an actual baby. The engineers designed the seat to keep the center of mass under the handle so the seat won’t tip forward even with heavier babies in it. The handle is in a permanently fixed position for a reason: To eliminate moving parts, which can sometimes wind up as safety concerns if they break/fail.

The seats have been crash-tested (there are belt guides on the carrier that are hard to see in some photos), and Gay says the carrier performs very well. We saw a video of one test, and there appeared to be very little downward rotation. (Downward rotation occurs in a frontal impact when the child restraint moves down and toward the front of the car. Reducing downward rotation is a good thing.) That said, they’re still deciding what kind of base to use. They have tested with some and are still determining the best route.

The height and weight limits are also still being determined. Gay said the seat will fit up to an average 18-month-old child, and said that height will be a greater factor than weight in determining the limits. The instructions will include a description telling parents how high up the shell their child’s head can go. We recommended also including an indicator on the seat itself.

The Kioma prototype has three sets of harness slots, and the harness is a regular rethread (again to reduce the number of moving parts and the weight of the seat). It’s possible the number, position, or location of harness slots could change before the seat is released. 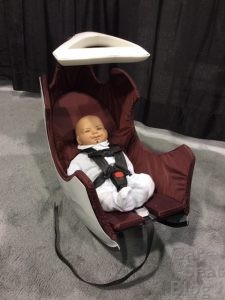 The interior of the seat is smooth and free of the crevices that often make it difficult to clean out messes. Kioma also features an anti-skid bottom, which should help both with a baseless installation in the car and with stability when the carrier is outside the car.

There will be available sunshades in the form of a “sleeve” that fits over the seat. The company didn’t have samples available at the show, so we weren’t able to see what they’ll look like. Currently the fabric on the seats has a slick nylon-type feel, although that might also change. The final seat will have an infant insert and possibly other soft goods as well. (The current fabric is easy to wipe down, but we recommended an insert made of a fabric that might be softer or more breathable.)

As for fitting in cars, the seat appears to be rather long, but that might be a bit of an optical illusion. The seat was initially designed to fit in smaller European cars, so we’re hopeful it will fit in a range of American cars, too.

The company is also working on stroller compatibility since they know that’s an important factor. We recommended making the carrier compatible with Maxi Cosi adapters to give the widest range of options.

A couple fun facts: On an aesthetic note, the seat features seven Fibonacci curves. The name “Kioma” was made up by Gay’s daughter and doesn’t actually have any particular meaning.

Kioma is based in Dallas, and the seats were designed and made in the USA (and will continue to be).

Now let’s address the elephant in the room: Pricing. Currently there are three different price points: $1,000, $1,200, and $2,500. The most expensive seat has the completely carbon fiber shell. The two lower priced seats have a carbon fiber shell but an aluminum handle. The $200 difference pertains to outward cosmetic appearance (“naked” carbon fiber exterior vs. painted). At those prices this seat won’t be for everyone, but this is designed for parents looking for an ultra-premium product.

Right now, Kioma is confident the seats will be ready to begin the production process in September. Given the number of factors that are still unknown, plus the number of regulatory hoops that will need to be jumped through, we’re not sure that’s an entirely realistic timeframe.

This might not be a “traditional” seat, but that’s what makes it intriguing. We’re excited to see how this design plays out and where it goes in the future.