There are a lot of black and white things about child passenger safety. Always read the manual. Always follow the manual. Harness should always pass the pinch test. But when you get outside of those black and whites, you’ll find a lot of gray areas. And those gray areas can almost always be categorized as “parental discretion”. As CPS Technicians we can give you suggestions about things that may or may not be dangerous, but we don’t always have the hard evidence for these things like we do for the black and white things.

One such gray area is the mirrors that attach to the rear vehicle seat head restraints so parents can see their rear-facing babies and toddlers. There are some CPS Techs who will tell every single parent that these are patently unsafe and are a projectile. Other CPS Techs who are also parents will use them in their own vehicles. So which is it – are they deadly projectiles or perfectly safe? Or neither? 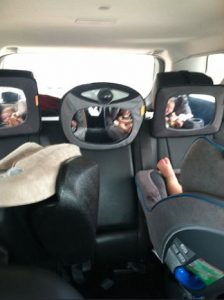 Alright, so let’s look at the science:

Well. Technically there is none. No studies on this to cite, no federal safety standards that mirrors have to pass in order to be sold. However, I don’t think that means we can’t come to a decision based on evidence. Let’s look more abstractly at the science. Specifically, how does speed impact the effect a projectile can have on a child? For this, we have to go back to high school physics. The force an object exerts is equal to that object’s mass times its acceleration. So let’s apply this to mirrors.

Based on a quick Amazon search, the average weight of a mirror is around 1 pound, which is equal to .45kg. So let’s say you were hit while traveling 30 miles per hour or 13.41 meters per second (for simplicity’s sake we’re going to say this happened in 1 second. This is not mathematically accurate, I am aware). If Force = mass x acceleration, the force of the mirror would be equal to .45kg x 13.41m/s, which comes out to 6.03N (newton). I know what you’re thinking. Cool math, Katie. But what does it mean?

What is 6N in real life? What does any of this mean?

Don’t worry, I’m not going to linger on the math. Basically, an object exerts more force when it’s moving quickly than when slowly, so a 1 pound mirror seems pretty insignificant, but when it’s traveling at 30 miles per hour, it will dramatically increase the force it exerts on whatever it hits.

But, is it deadly?

Well, for it to strike the child, first, it would have to dislodge from the vehicle head restraint. There are a variety of ways that mirrors attach to the head restraint. Some attach to the vehicle’s top tethers, others buckle or hook to plastic hooks around the top or back of the headrest, others just use velcro to keep it in place. There is a chance that these attachments could break or fail in a crash, and logically, it would be more likely for a heavy mirror (like the ones with batteries and moving lights and music speakers), to break from its attachment than a light one. This all goes back to that force equation- the heavier mirrors will impart more force during rapid deceleration, and the straps have to be able to restrain them.

Assuming the mirror did dislodge, the injury to the child would depend greatly upon the speed of the crash, the weight of the mirror, and the part of the child’s body that was struck. I would also argue the design of the mirror is also worth considering. Obviously, a heavy mirror will exert more force and a faster crash will likewise increase the force but I think we also need to consider the design of the product. A mirror with hard plastic edges is likely going to result in more significant injuries than a mirror with soft padded edges, even if it strikes with the same amount of force. 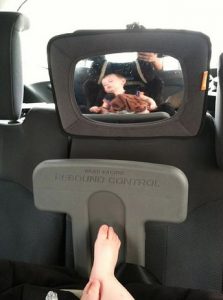 After a solid google search, I haven’t been able to find mention of any injuries from backseat mirrors and certainly no fatalities from them. In terms of physical injuries caused by mirrors, I think we are left to assume that it is possible for a child to be injured by a poorly attached heavy mirror that becomes dislodged in a crash.

Before we rule on this myth, are there other dangers we’re not considering with regard to mirrors?

As a CPS Technician who makes the personal choice to use a mirror, I can tell you without question that they can be distracting. It’s easy to spend just an extra second checking to see if baby is asleep and in that second, if the traffic ahead of you stopped suddenly, you would be at risk for a significant collision. Likewise, it’s easy to miss hazards in the road, someone changing their lane into yours, etc. Anytime you take your eyes off the road, you put yourself and your child at risk. I personally believe (and again, I’m not anti-mirror, I use one in my vehicle) that a parent can be distracted enough by a backseat mirror to cause a crash.

So, what about our myth? Do backseat baby mirrors present a life-threatening danger in a crash?

Verdict: This myth is a tough one. We have no scientific proof that it has happened or will happen, but I think when looking at the physics, it is PLAUSIBLE.

As a CPS Technician, I tell parents frequently that I do not recommend using mirrors, but if they are going to use one that there are a few things they can do to lower the risks associated. First, make sure you pick one that is lightweight and has soft edges. There are even a few mirrors made by car seat manufacturers. The Evenflo Back Seat Baby Mirror and the Britax Baby Car Mirror are among several lightweight options with soft edges. I’m not endorsing any particular product but some appear to be less risky than others. 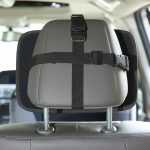 Second, make sure that it is securely attached to a vehicle head restraint. Designs and attachment systems vary a lot from one product to the next and some appear more secure than others. Also, keep in mind that not all head restraint designs can be used to securely mount a mirror. Once the mirror is properly secured, give it a good hard tug and decide if you think that it would stay put in a moderate impact.

Last but most importantly, remember that looking at the mirror while driving is a distraction and that distracted driving is deadly driving. If you’re going to use a mirror, check it as briefly and sparingly as possible. If you find that you are getting distracted by it, take it off. If you don’t give your children food or toys with small parts, you don’t have to worry about choking, and other car seat issues can be triaged when you arrive at your destination or take a pit stop.

Ultimately, while mirrors may be controversial, I still think it’s an important topic to discuss. When parents are better informed, they can make better choices.