To Whom It May Concern-

I want to start out by saying that I love your show. I really do. I have loved it since it came on the air years ago and we watch it religiously, even though we don’t have cable or an antenna, because we love it so. But I would be lying if I didn’t also say that I am at the end of my rope with a significant oversight that just keeps showing up: child passenger safety.

The first time it happened, I don’t think it even really pinged my radar. Probably because I didn’t have kids and didn’t know anything about car seats (which I suspect is true of whoever oversees things on this show). But now looking back, I realize how big of an error it was.

The first time was when Lily, the daughter of

Cam and Mitchell, was a baby. It’s possible that she was over the age of 1, both in real life and in the show, but she is very small and it looks a whole lot like she’s forward facing in a rear facing only seat. I’ll admit I could be mistaken and will forgive them this one if I am (even though she would be substantially safer rear facing), since forward facing after age 1 and 20 pounds is legal in Los Angeles, but it’s where my mistrust began. 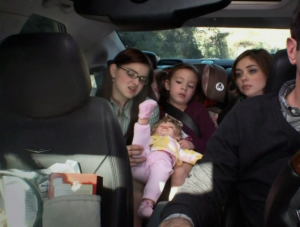 The next time was when Lily was a bit older. This one nearly snuck by me, but if you look closely, Lily, who in no way, shape or form, should be in a booster, is not belted properly in her seat. If I had to guess, I’d say that the seatbelt is over the armrest instead of under it, but either way, the belt fit is not correct. Picky? Maybe. But as most of you know, child passenger safety is one area that we ought to be picky about. The seat belt should be contacting the middle third of her clavicle and low on both hip bones, as those are the strongest boney parts of the body and are most able to withstand the crash forces. Complaining about where the belt is now might seem picky, but it could cause really significant injuries.

And don’t worry, I’m about to get less picky.

Last year, I spotted a hideous misuse of a car seat on the show. 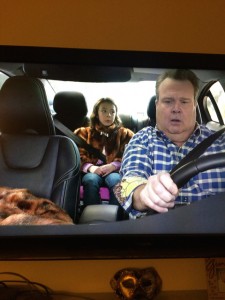 By this point in the show, Lily is of a fine age to be seated in a booster and could easily demonstrate a proper belt fit, but in a move I can only understand as temporary insanity, she is buckled in with the seatbelt from the outboard seat, despite being seated in the center. I just, what? In California, which is a proper use state, this would be illegal because it is use against the manual of the child seat. But moreover, in a crash, if Lily wasn’t ejected (which would be a minor miracle), she’d sustain some pretty terrible injuries to her spine and probably her head. Also, that vehicle seat doesn’t have a headrest, which means she should be seated outboard or back in a high back booster because in a crash there’s nothing to slow her head and she could dangerously hyper-extend her neck. If any of that footage was done with a real car in motion, that child was in danger.

Oh but I’m not done.

While we were watching TV the show a few weeks ago, I spotted something and had a bad feeling about the next few scenes. In the episode, Gloria left Joe sleeping in his car seat parked in front of her house. I don’t have anything to say about that choice since the show handled it well, but I noticed that Joe’s car seat was a specific brand that I happen to be fond of. A specific brand who does not make a combination seat and because I’m a walking encyclopedia of useless information, I also knew it wasn’t that company’s convertible seat either. So I was perplexed about how Joe was going to be secured in the car seat. And then the shot panned out and… 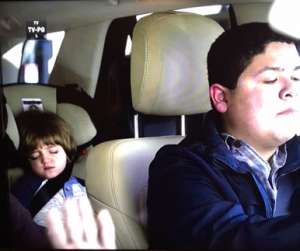 First, Joe is barely 3 years old on the show. I don’t know how old the little boy who plays him is, but Joe Pritchett is 3. I don’t have an official scale, but I would be shocked if he actually weighs the required 40 pounds for use of that seat. If he’s under 40 pounds, it would be illegal for him to ride in that seat in California. Second, the belt fit is atrocious. Literally horrible. The belt is contacting his neck, which cases his spinal cord and while it’s not immediately visible, the lap belt was also high and on the belly, which is very dangerous as the organs are not protected and could sustain significant trauma.

In a crash, this child would be severely injured, maybe killed.

And look, I understand that it is not the responsibility of television to teach car seat safety, I really do get that. But why not take the extra 10 minutes to use the car seats correctly? And isn’t there an obligation for you to keep your actors safe? Isn’t it reasonable to expect that you would use the right car seat and right seat belt? I probably sound picky to you, but I don’t feel like I’m asking a lot. I don’t need you to rear face a 3 year old. I don’t need you to demonstrate extended harnessing on a 6 year old (though, for the record, that would be GREAT). I’m asking that a 6 year old in a high back booster use the right seatbelt and that a 3 year old ride in a harnessed forward facing car seat, especially since he would still fit in literally every. single. one. on the market.

I will stop lecturing now and give you the same advice I would give any parent or caregiver of a child who is still young or small enough to need a car seat- read the car seat manual from front to back and then set up a seat check with a CPST. You can easily find one at SafeKids. Up to 90% of car seats are misused, won’t your show consider being in the 10% that uses them correctly? 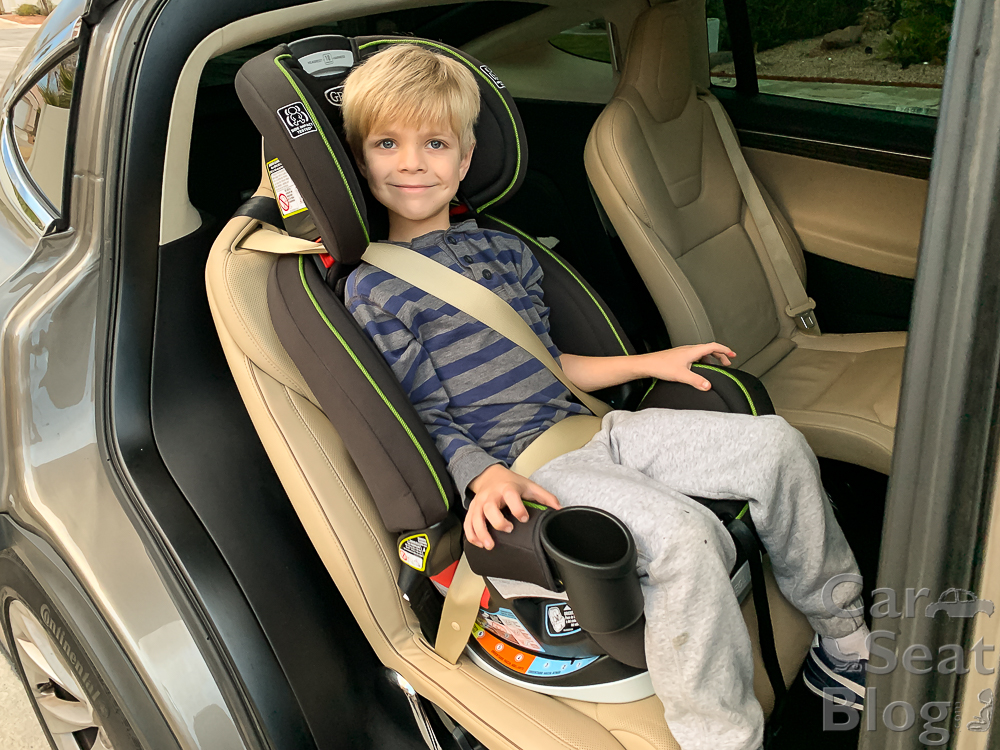