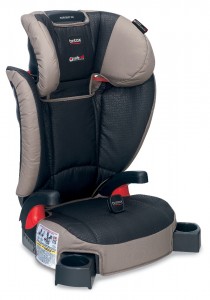 The “Bin the Booster” campaign is British Britax’s gift to the internet, much like Graco’s buckle recall—it keeps popping up in people’s feeds causing unnecessary panic and bewilderment on this side of the pond. In a simple crash test video, Britax compares a backless booster (portable booster cushion as they call them over there) to a high-back booster. In this video, the child dummy sitting on the backless booster rotates around the shoulder belt while the child dummy sitting in the high-back booster remains properly positioned.

It’s a marketing tool. Britax only makes high-back boosters in Europe (the backs can be removed in the U.S.). There’s nothing abnormal about the way either dummy reacts in this crash test. Crash tests are very scary to watch—the video slows things down to a speed to which we can comprehend what’s happening. If we were to watch it at full speed, at the end, we’d likely think, “OK, great,” and move on to the next thing. Slow motion gives great impact, doesn’t it? Probably the most important thing to notice, however, is that there are 2 different types of dummies used, and this can greatly affect motion in a crash test. Simply placing the stiffer dummy in the high-back booster makes it seem more appealing because it will have less movement around the seat belt. (As much as I’d like to take credit for noticing that, I am not a Euro dummy specialist. Car-seat.org member _juune pointed it out in one of our threads on this topic.) Once you’re aware of this tidbit, you can see the dummies are shaped differently.

There are some schools of thought that high-back boosters provide better protection, especially in side impacts. It makes sense, right? By having head wings filled with EPS or EPP foam surrounding your child’s head and torso in a crash, there’s something to take the impact and spread the force instead of having their head hit the door or window or side pillar. On the other hand, having that back on the seat puts the child several inches forward on the vehicle seat, closer to the front seat and side pillar. In a crash, the child could much more easily hit the front seat or pillar, especially in a small vehicle. Are we starting to overthink things here? Maybe I can help settle your thoughts with this quote from a study done by researchers at the Children’s Hospital of Philadelphia (bolding mine):

This study reconfirms previous reports that BPB seats reduce the risk for injury in children 4 through 8 years of age by studying a greater percentage of children aged 6 to 8 years than previous studies. After adjustment for potential confounders, children who were aged 4 to 8 and using BPB seats were 45% less likely to sustain injuries than similarly aged children who were using the vehicle seat belt. Among children who were restrained in BPB seats, there was no evidence of a difference in the performance of backless versus high-back boosters.

Let’s also add side curtain airbags into the equation. Side curtain airbags are fabulous safety devices for all members of the family, including kids in carseats. These airbags deploy straight down the roofline of the vehicle to the bottom of the windowsill, protecting the head area of passengers. A child sitting on a backless booster will be boosted up to have the protection of the side curtain airbags. Of course, so will a child in a high-back booster. This is assuming your vehicle has side curtain airbags, which not all vehicles on the road do. 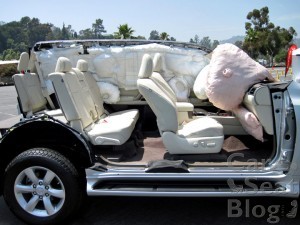 So what can I do to make my kid safer in a booster?

1. Can sit with bum all the way back.
2. Knees bend at the vehicle seat edge.
3. Shoulder belt centered over the shoulder.
4. Lap belt touches the thighs.
5. Can stay this way the entire ride.