You may have heard that the American Academy of Pediatrics (AAP) recently updated their recommendations on rear-facing. As usual, there’s some good news and some bad news. As with our carseat reviews, we will discuss both the good and the not-so-good and try to offer some perspective lacking in national news coverage of this update.

The Good News: The basic recommendation for rear-facing has NOT changed. “The Academy continues to recommend that all children ride in a rear-facing car safety seat as long as possible, up to the manufacturer’s stated weight and length limits.” This updated guidance from the AAP now better matches NHTSA’s policy for consistency in messaging. The authors of CarseatBlog have strongly supported Extended Rear-Facing (ERF) for over 15 years and continue to support this practice. 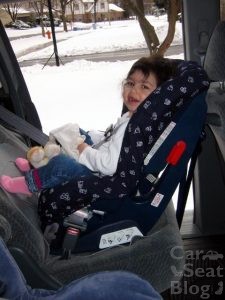 The Bad News: As we reported a year ago, a major study from 2007 was found to be flawed. This study was the main source of injury data to compare rear-facing child restraint systems (RFCRS) to forward-facing child restraints (FFCRS) in the USA, for children up to 23 months old. It was also the basis for the erroneous ‘Rear-facing is 5x safer’ statistic. Newer research found some contradictory data, causing the original study to be retracted. A revised study, by some of the authors of the original 2007 study, concluded, “Non-US field data and laboratory tests support the recommendation that children be kept in RFCRS for as long as possible, but the US NASS-CDS field data are too limited to serve as a strong statistical basis for these recommendations.” This led to the evolving AAP advice that, “…while the trend was for rear-facing to be superior to forward-facing for children under 2 years, the numbers were too low to reach statistical significance.” Definitely not as compelling as 5x safer.

More Good News:  The reason there is no significant real-world information is because the sample size of injuries to children in car seats is so low during the 22 year study period that there simply isn’t enough data to compare rear-facing to forward-facing conclusively. In fact, all these studies included less than severe injuries just to do an analysis, because there are so few data points for severe/fatal injuries to kids in child restraints. According to the revised study, “NASS-CDS data indicate an extremely low injury rate in children up to 2 years of age in both RFCRS and FFCRS.“ It turns out that both rear-facing and forward-facing car seats do a very good job of protecting children within the relevant age/weight/height limits!

Because the real-world injury data in the USA no longer supports that rear-facing is significantly safer for kids up to 23 months old, the AAP removed the portion of their policy statement recommending that kids remain rear-facing until at least 2 years old. Also, since the original study is retracted, we have to pretend that it never existed. Therefore, we can no longer claim that rear-facing is proven to be five times safer than forward-facing. We can’t even say that statistics prove that rear-facing reduces the real-world risk of serious injury for kids up to 2 years old [or to any age] in the USA.  On the plus side, the 2011 AAP policy on rear-facing to at least age 2 led to a lot of awareness about the safety advantages of rear-facing.

Let’s take a step back and examine the most recent AAP policy statements to put these minimum age recommendations in perspective. Fundamentally, the policies on rear-facing haven’t changed, except for the inclusion of minimums. For over 15 years, the AAP has continued to recommend that kids remain rear-facing to the limits of their car safety seat. In essence, “as long as possible.”

AAP 2018: All infants and toddlers should ride in a rear-facing car safety seat (CSS) as long as possible, until they reach the highest weight or height allowed by their CSS’s manufacturer. Most convertible seats have limits that will permit children to ride rear-facing for 2 years or more.

AAP 2011: All infants and toddlers should ride in a rear-facing car safety seat (CSS) until they are 2 years of age or until they reach the highest weight or height allowed by the manufacturer of their CSS.

AAP 2002: Children should face the rear of the vehicle until they are at least one year of age and weigh at least 20 lb. Infants younger than one year who weigh 20 lb should still face the back of the car in a convertible seat or one that is approved for higher weights. For optimal protection, the child should remain facing the rear of the car until reaching the maximum weight for the car safety seat, as long as the top of the child’s head is below the top of the seat back.

Clearly, this is not the end for extended rear-facing. The retraction of the main study supporting ERF in the USA is indeed a big loss, but not a total surprise because this study had known flaws long before this retraction. Again, the fundamental guidance HAS NOT CHANGED. We still recommend kids remain rear-facing, preferably for 2 years or longer if they are within the rear-facing height and weight limits of their carseat. In particular, parents should pay close attention to the seated torso height limit of the rear-facing seat (which typically requires 1″ or more of shell above the head).

As always, we like to remind parents that these recommendations from the AAP are safest practice guidelines. They aren’t rules or laws.

The rules a parent must follow are those printed in their car seat and vehicle owners manuals, on the car seat labels and in any relevant state law. CarseatBlog endorses the AAP guidelines for added safety. We also like to offer perspective by looking at the BIG picture. The biggest reductions in risk come from the following simple steps:

So please, buckle up and drive safely!