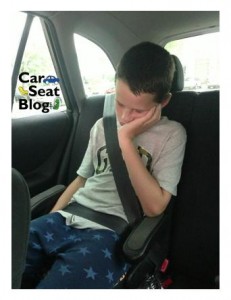 I remember this one time when I was about six years old, my mom and some other parents were driving a big group of kids to swimming lessons at the YMCA. I didn’t know most of the kids—I think they were actually part of an after-school program at my friend’s school—but I remember that I sat in the back seat next to a big girl, who for some reason I remember was named Pam.

My mom told everyone to buckle their seatbelts, and Pam said, “I’m 13, so I don’t need to wear a seatbelt.” I was shocked that some other kid would a) not wear a seatbelt, and b) would talk back to my mom, but my mom handled it well. She said, “Well, I’m an adult and I wear one, so you will, too.”

I give my mom credit for being ahead of the curve (this was 30 years ago, after all, when it was common for kids to bounce around in cars, completely unrestrained). Times have changed a lot, in regard to car seats, booster seats, and universal seatbelt use, but all of us advocates know there’s still work to do. 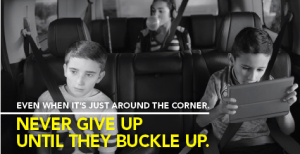 Recently NHTSA launched a new campaign to help educate tweens (kids 8-14) and their parents about the importance of buckling up in the car. NHTSA found that as kids get older, they’re less likely to buckle up. During the past five years, half of children 8-14 years old who died in car crashes were unrestrained.

Reasons for this include a natural inclination to test boundaries, busy schedules (rushing to after-school activities), and peer pressure. Kids this age are typically responsible for their own buckling (as opposed to younger children in harnessed seats), so parents rely on their kids to get it right, and might not notice when they don’t. There are also still misconceptions about the importance of buckling up on every trip, Many people (kids and adults) think that short, familiar trips don’t require seatbelts. There’s also still a somewhat prevalent (and flawed) idea that people in the back seat don’t need seatbelts, so some parents might know their tweens aren’t buckling up but don’t see anything wrong with it.

It’s also important to remember that not all tweens are ready for the seatbelt alone. Until kids fit properly in the belt (usually not until between 8-12 years old, or when they’re about 4’9″…though it varies) kids still need booster seats. That not only improves safety, but also improves comfort. A 9-year-old with a shoulder belt across her neck is likely to put it behind her back instead, or might skip the seatbelt all together. See this post for more information on determining when kids are ready to ride without a booster seat.

So how can parents encourage seat belt usage in their tweens? Here are some tips from NHTSA and us: