Home
Safety
Bumps in the Road
Tweet Pin It

Imagine you’re staring at a collection of household and recreational goods: TVs, recliners, jet skis, barbecues, bed frames. Are you standing in the middle of a really great department store? 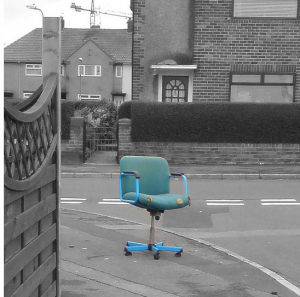 No, you’re looking at just a small sampling of the detritus that falls on the highways and byways of America every day.

Freeway debris was the topic of a recent article in the Los Angeles Times. According to the article, during one randomly selected 90-minute period, there were 20 calls to remove debris from freeways in Los Angeles County alone. In 2009, 1,723 collisions and 15 fatalities were attributed to road debris in California. That might represent a small number of the overall crashes and deaths in the state, but it must have been pretty significant for at least 1,738 people.

The article was very interesting, but it left out some important information: namely, what to do if you encounter debris in the road.

I had always been taught that it’s better to hit an animal than to swerve out of the way, but I realized that what applies to raccoons probably doesn’t apply to refrigerators. So I called Officer Chris Goodwin with the California Highway Patrol for some information and advice.

He said that it’s best to make a safe lane change if you’re able (even when it comes to raccoons), but in heavy or fast traffic, that’s not always possible. If you need to drive into an object, the slower you’re going, the less severe the damage is likely to be. Once you’ve passed the obstacle, call 911 to report it to local law enforcement so they can remove the hazard.

The best defense is to avoid having to make a quick decision. Officer Goodwin said that most people drive with their eyes focused just in front of their hood. He said a safer way to drive is to create a “high visual horizon”–that is, look half a mile down the road. The sooner you see a hazard (or brake lights of the cars ahead), the more time you have to take action.

This is also a good reminder to keep enough space between your car and the vehicle in front of you. You want plenty of time to stop in case the minivan you’re traveling behind suddenly encounters a futon. Officer Goodwin said that it takes three-quarters of a second to even begin to react, and then another three-quarters of a second to get your foot to the brake pedal. So by the time you first hit the brakes, 1.5 seconds have elapsed. If you leave three seconds between your car and the one in front of you (as recommended by the California DMV), you’ll still have 1.5 seconds to come to a stop before you rear-end anything. (In Ohio I was taught to leave one car length for every 10 miles per hour you’re traveling, so six car lengths for 60 mph. I suppose that works out to about three seconds.)

If you see things falling–or in imminent danger of falling–from a vehicle, call 911. The more information you can provide, the better (make, model, color, license plate). Providing the location of the object or vehicle is especially important. 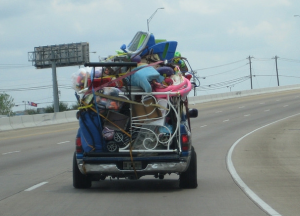 Also, don’t assume that a deep truck bed means your objects will be secure, as my husband learned the hard way many years ago. He was transporting his parents’ large outdoor nativity set in his truck and thought the pieces had plenty of stability. He didn’t take into account the suction that’s created behind a vehicle when it’s traveling quickly. He looked in the rearview mirror just in time to see the holy figures levitate out of his truck and onto the road. (Baby Jesus was the only one who stayed in the truck and survived, thanks to either a miracle or a low center of gravity.)

Thankfully no real humans or other property were harmed in the ordeal, although the results are not always so fortunate. Hopefully the tips here will help you be prepared in case life hands you lemons…or a whole truckload of them.