Only a few vehicles with three rows of seating have earned this badge of safety, and the 2014 Mitsubishi Outlander is one of them.  It earned an IIHS “Top Safety Pick +” AND an NHTSA 5-star overall rating for 2014*.  Very impressive!  It’s also by far the least expensive and most fuel efficient of the three row vehicles to accomplish this feat (the Honda Odyssey, Toyota Highlander and Acura MDX being the others).  Want top-notch safety and third row flexibility with good fuel economy at a reasonable price?  If so, you will definitely want to add the Outlander to your list of vehicles to consider. 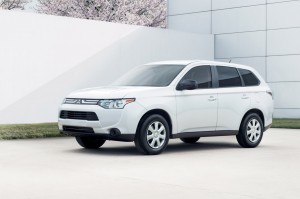 In the Outlander SE trim, you not only get exceptional protection for your loved ones in terms of crashworthiness, but you also get some essential standard features like a backup camera, rollover protection side curtain airbags, hands-free Link phone system, daytime running lights and turn signals integrated into the side mirrors.   Above average visibility is another safety bonus.  With 2WD, this model with a 2.4L 4-cylinder engine starts at $23,795 MSRP and has an impressive EPA fuel economy of 25 mpg city, 31 mpg highway and 27 mpg overall!   You also get some nice other features including 18″ allow wheels, fog lights, color multi-information display, dual-zone climate control, heated front seats and remote keyless entry with keyless ignition.

The touring package adds a whopping $6,000 but gets you a number of great options, including advanced safety features like lane departure warning, adaptive cruise control and forward collision mitigation with autobrake.  This last feature earned a very commendable “Advanced” level of protection from the IIHS that is awarded to only a few non-luxury small and midsize SUVs for 2014.   It’s nice that Mitsubishi allows this option to be added to the SE trim.  On most other SUVs, this is reserved for high end models costing much more.

I tested  a loaded GT trim with Super All-Wheel Control and a 3.0L V6 with 6-speed transmission.  This setup provided plenty of power, and the transmission was good, even if not quite as smooth as some top competitive models.  While I didn’t get to test it in snow, the AWD system appears to be more advanced than some others in this class, allowing power to be actively sent not only from the front to rear axle, but also from side-to-side, effectively having a limited slip differential.  On paper, this may be a superior option than the traction control systems used to achieve a limited form of torque transfer in many AWD vehicles today.  The downside of this powertrain is the cost increase, both upfront and due to the lower fuel economy.  I managed less than 18 mpg around town after a few hundred miles.  About the same as the much nicer Toyota Highlander XLE V6 AWD I reviewed recently.

Given the impressive safety credentials even on the inexpensive SE trim level, I really wanted to love the Outlander.   Starting with the “meh” styling inside and out, and finishing with driving performance that is nothing special, it simply didn’t impress as I had hoped.  The cabin noise was enough to make conversations difficult at times.  The ride and handling were just average for a small SUV, a problem compounded by relatively hard front leather seats.  The only time the Outlander might remind you of a compact sedan is while parking, which was surprisingly easy compared to any midsize SUV, especially with the standard backup camera.  Braking and acceleration on my GT model were competent, at least.

Getting Your Precious Cargo Aboard:

The second row is pretty typical of a compact car or SUV.  It’s not very wide.  The outboard seats are designed well for carseats.  The LATCH anchors are easy to find.  The buckle stalks are a reasonable length.  The head restraints can be removed if needed.  I had no issues with a variety of child restraints I installed there.  The seats do move fore and aft which is a great benefit, allowing some flexibility for legroom given the relatively modest dimensions of the vehicle.   An average infant seat, like the Graco Snugride 30 Classic Connect (below, left) or small convertible like the Britax Advocate (below, right, far side) should allow an average driver enough legroom in front.  Large combination harness/booster seats like the Britax Frontier 90 (below, right, near side) fit well in the outboard seats. 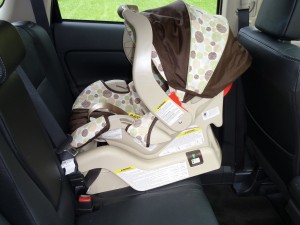 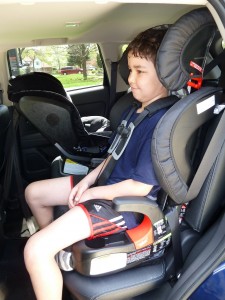 Rear-facing tether accessory straps work well on the leg of the front passenger seat (photo, left), for convertible carseats that allow their use.  On the other hand, the design of the top-tether anchors on the back of the seats is a little unusual.

Typical tether hooks are too big too fit the normal way, so you have to attach them upside down or rotate the end of the hook to get it onto the anchor.  In addition, the head restraints must be removed to use the top tether, which is not a big issue but might be overlooked.  Similarly, after installing a carseat, Mitsubishi indicates that the seat back must be brought upright to the 4th position from reclined.  Again, also not a big deal as this is a trick sometimes used to help secure a child restraint, but this is another step that could easily be overlooked by a parent.   Finally, the shoulder belts are not adjustable anywhere in back, something to consider for kids in some backless boosters.

The big problem with the second row is the middle seat.  It’s simply too narrow to fit anyone but a pre-teen, teen or small adult when seated next to other adults.  Taller teens or adults will not have adequate head protection from the head restraint in this middle seat.  In addition to the width limitation, the buckle stalks are rather long and crossover with the buckle stalk and LATCH anchor on the driver side, making carseat installation problematic at best.  Even with significant effort, the narrow Diono Radian was a marginal fit in the center seat. A 3-across carseat setup is likely going to be very difficult.  I did not have a combination of carseats that worked well, with the possible exception of using a BubbleBum in the center and helping a child squeeze in and buckle, assuming they have enough shoulder room to fit between two carseats (see video below).

The third row is a great improvement from the previous Outlander, but still has a number of important limitations.  To start, access is narrow.  Fine for kids, but perhaps difficult for some adults (photo, right).  Next, according to the owner’s manual, rear-facing seats MUST ONLY be used in the second row.  Not that there would be enough room in the third row, with the possible exception of a small convertible like a Combi Coccoro perhaps.  Third, there are no top tether anchors for the third row.  This makes it marginal to use a forward-facing seat in the third row, since top tether use is always recommended.  Finally, Mitsubishi limits its use to passengers 63″ tall or less.  Taller kids will find the lack of legroom and the low seat cushions make it uncomfortable for longer trips, even well before they reach that 5-foot, 3-inch height limitation.

Combined, those restrictions effectively limit third row use to kids 4 years and above who are using a belt-positioning booster and perhaps shorter pre-teens who are out of a booster.  Even kids in boosters will have some problems, because average and wider boosters may overlap the seatbelt buckle stalks a little.  Combined with the short length of the stalks, younger kids may have trouble buckling themselves.  A high back booster is recommended for smaller kids, because the shoulder belt is mounted forward enough to make the fit less than ideal for kids with a small torso who are using a backless booster.

Getting Your Other Cargo Aboard:

Cargo space is quite small with the third row seating in use.  An umbrella stroller and a couple small bags of groceries might fit, but not much else.  Fortunately, the third row seats fold independently, but the head restraints do not fold automatically and must be removed first.  The second row seats also fold in two sections, but the system is rather cumbersome and takes a few minutes to accomplish.

Finally, the manual is outdated.  It should make it simpler for parents to get their children riding safely without missing an important restriction.  For example, while it says local and state requirements may vary, it recommends that children over 1 year of age and less than 40 pounds must be in a forward-facing restraint.  Rear-facing is the safest mode of travel and the American Academy of Pediatrics and other agencies have recommended rear-facing for toddlers beyond 1 year for at least a decade.

In terms of value, the all-new 2014 Nissan Rogue and Mazda5 also offer third row seating at a similar price, with similar fuel economy. Both are more refined than the Outlander overall.  The Mazda5 may be the nicest competitor, but is still untested by the IIHS and NHTSA for crashworthiness.  The Rogue did very well in the IIHS testing, but turned in unacceptable results in the NHTSA frontal crash test.  The other solid competitor is the Kia Sorento.  It offers a little more room, but is also pricier with lower fuel economy and received a “Poor” result in the IIHS small overlap crash test.

In terms of safety, it’s nearly impossible to top the Outlander for a compact vehicle with a third row of seating.  For those who don’t need a third row, the slightly smaller Subaru Forester and Mazda CX-5 are great all-around compact SUVs with excellent crashworthiness and crash avoidance capability.  The larger Toyota Highlander LE is more expensive, but also much more family friendly.  Unfortunately, you have to opt for the pricey Limited trim to get the tech/platinum package that earns a Top Safety Pick+ rating from the IIHS.   The 2WD Outlander SE with Touring package gets you there for about $30,000.  The 2WD Highlander Limited with Tech Package, while much nicer, will set you back over $10,000 more for this!  Ouch, Toyota.

With 2WD, the 2014 Mitsubishi Outlander SE is easy on the wallet, gets above average fuel economy for a 3-row vehicle and has impressive crash testing results.  If you’re on a budget and have small kids that can utilize the tiny third row seat, this might be a good value choice to consider.  Models like the Nissan Rogue, Kia Sorento and Mazda 5 provide a third row seat starting around the same price range, but all fall short of the Outlander in terms of overall safety and crash-worthiness.  Even so, these models tend to be more refined overall, inside and out, and offer some advantages that may offset the safety features of the Outlander for some families.  Unfortunately, all these compact models have cramped third rows and have the usual difficulties with carseats and small cars.   If you have a bigger budget and are looking at the GT model, then you should also consider something like a 2014 Toyota Highlander LE Plus that offers excellent safety, good fuel economy and a lot more room and refinement all around.

Thank you to Mitsubishi for providing the test vehicle used in this review.

* The Outlander AWD received a 5-star overall NHTSA rating.  The Outlander 2WD received a 4-star overall rating, even though its crash testing results were identical to the AWD version.  This is apparently due only to a very slightly higher rollover risk for the 2WD trim, even though both versions received a 4-star rollover rating as well.  It’s an unfortunate problem with the NHTSA’s rating system that gives these two essentially identical models a different overall rating.