Home
Automobile Safety
It puts the “Mini” back into the Minivan: The 2012 Mazda5 Kids, Carseats & Safety Review
Tweet Pin It

Usually, seating more than 5 passengers and getting decent fuel economy are mutually exclusive. Most midsize or larger 3-row SUVs can’t even manage 20mpg combined, usually much less around town.  If you don’t mind a minivan, they do get a little better fuel economy than the midsize SUVs and much better than full-size SUVs.  Minivans also tend to be roomier and more flexible for seating lots of kids, but they’re really not-so-mini these days.  Many parents lament that they are too big for the garage, too big for parking spaces and too big for the pocketbook, too.

Some compact SUVs get a little above 20mpg combined. Hybrids like the Escape and Highlander do much better than that, but the Escape only seats five and the Highlander is all but priced out of the market.  So what’s left if you want something a little bigger than a compact SUV and don’t want to spend a bundle of cash?  The Kia Sorento LX is one option.  With front wheel drive and the fuel efficient GDI 4-cylinder engine new for 2012, it gets 22 city, 32 highway and 25 combined.  The Sorento LX isn’t cheap, at just over $26k sticker price with the third row option package it rivals the cost of some full size minivans.  The upcoming Ford C-Max may be another contender in 2012.  For now, the most economical option is the 2012 Mazda 5. It gets a very respectable 21 city, 28 highway, 24 mpg combined. Room for 6 is standard and it starts under $20k MSRP in Sport trim with a manual transmission.  A nicely equipped Touring version lists around $22k with an automatic and sells for closer to $20k street price!  My review Touring model added the Moonroof & Audio package and a rear bumper guard for a total of $23,180 MSRP.

Does it live up to expections?  It does in regard to fuel economy.  On the highway, I got a hair under 30mpg on two tanks of gas from Chicago to Louisville and back with 3 adults and luggage.  That’s not only above the EPA estimate, but also about 5 miles per gallon more than the Honda Odyssey Touring Elite on the same trip, even though they have the same EPA highway rating.  Certainly not a scientific test by any means, but still impressive.

Now onto kids and safety!  Let’s start with a video review:

Perhaps the biggest disadvantage for safety-conscious buyers is that there is still no crash test information from the IIHS or the NHTSA.  In fact, in response to my inquiry, I found the NTHSA doesn’t even have it scheduled to test in their 2012 program.  You do get side curtain airbags for all three rows of seating and stability control is now standard as well.  Crash avoidance should also be good, with the nimble handling and above average visibility.  Unfortunately, there is no backup camera; a major omission for a car marketed to families with kids.

As you can see in the video, the Mazda 5 is all about compromise.  You simply don’t get the legroom, cargo space or general roominess of a typical minivan that seats 7 or 8 passengers.  It’s even a bit smaller than many midsize SUVs with a third row.  On the plus side, it drives and handles far better and, as I mentioned, it gets better fuel economy and it costs a lot less, too!  Even though it’s shorter than full size minivans and most midsize SUVs, you can still make it work for a family, as I demonstrate in the video below.

As for carseats, the news is generally good.  Most will install well in any rear seating position!  The second row has LATCH and the lower anchors are not difficult to find or use.  The third row doesn’t have LATCH, but it does have a top tether anchor on the back of each seat (thank you Mazda!).  You also get head restraints and [removeable] shoulder belts all around.  There is plenty of width so kids can buckle themselves easily in a booster and the short seatbelt buckle stalks make carseat installation somewhat easier than average.  The bad news mostly comes from limited cabin length.

This is compounded by the owner’s manual that requires you to move the second row seats all the way back when installing a child restraint there.  In addition, due to the front passenger seat airbag sensors, the manual also states that objects (like a rear-facing carseat) should not be touching/pushing the front passenger seat.

What this all means is that legroom can be at a premium, depending on the type and location of the carseats.

You can put a carseat, booster or adult in the third row, but there will be no legroom at all if there is a carseat installed in the second row seat that must then be moved all the way back (photo, left).  Also, some taller rear facing seats may not fit in the third row, especially when the second row seat is all the way back.  So, if you have a family with three or four kids, the arrangement can be tricky and may require careful selection and placement.

On the plus side, even some of the biggest combination seats will fit side-by-side in the third row.  Unlike some other minivans and SUVs, you get top tether anchors to more safely secure those big-kid carseats in the third row as well.  As long as you don’t have a carseat in the second row and can move it forward a few notches, there’s adequate legroom for older kids, too.   You can see this below with a Recaro ProSport (left) and a Britax Frontier 85 SICT (right): 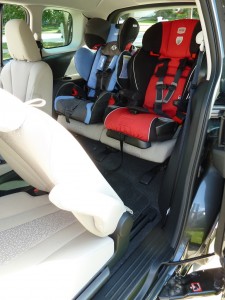 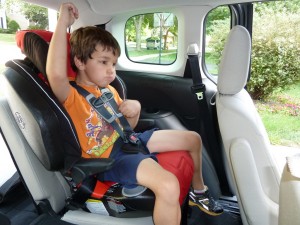 The second row seats will accommodate almost any child seat and width is not an issue.  Aside from the restrictions mentioned already, you should be able to fit most convertibles and infant seats there.  Below are a Graco SnugRide 30 and Cosco Scenera (left) and a Sunshine Kids Radian XTSL (right).   There is also a good location around the front seat leg for a rear-facing tether accessory strap. 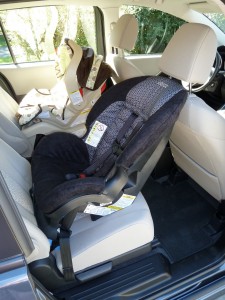 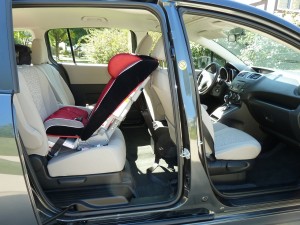 Access is good overall.  The low stance makes climbing into the Mazda 5 easy compared to most minivans and SUVs, especially for kids.  The sliding doors are not powered, but they operate easily enough for most kids to operate (unless you’re on a hill perhaps!).  Getting into the third row is no problem for kids, but can take some contortion for larger adults.

I had a lot of fun driving the Mazda 5, especially compared to the minivans and SUVs I’ve driven lately.  It really does drive like a car, as it basically is a Mazda 3 at heart.  Even the auto-stick is fun, letting you rev up the engine like you would if you opted for the manual transmission.  It rides low and never gives the feeling you’re going to tip over around curves like many SUVs and some minivans do!  Perhaps the only drawback is that it doesn’t accelerate like a sports car.  That’s fine, because it still has enough power for a family vehicle and the smaller engine gives it better fuel economy!   We had only a couple real complaints on a long road trip.   All three adults found the seat cushions to be too firm after a couple hours.  Also, the ventilation to the second and third rows is not very good.

Unlike the Buick Enclave I reviewed that was substantially “Made in USA”, the Mazda 5 claims only 5% domestic content with engine, transmission and assembly in Japan.  Overall, the quality of the vehicle seems to be quite good.  Other than the selection of cheaper looking interior materials, it seemed like you get a very solid vehicle for the money.  Everything fit together well and I observed no rattles or other related concerns.

The 2012 Mazda 5 is a great family hauler, especially for smaller families.   It provides a ton of convenience for two or three kids, gets relatively high fuel economy and offers something fun to drive at a bargain price!  You can fit a family of six with careful selection and arrangement of child seats, but you’ll probably need a hitch or rooftop cargo solution for longer trips.  Other than that, it’s a great alternative to SUVs and minivans when you find that a midsize sedan or wagon just doesn’t have enough room for an increasing number of kids!

Thank you to Mazda and DriveSTI for providing the vehicle used in this review! 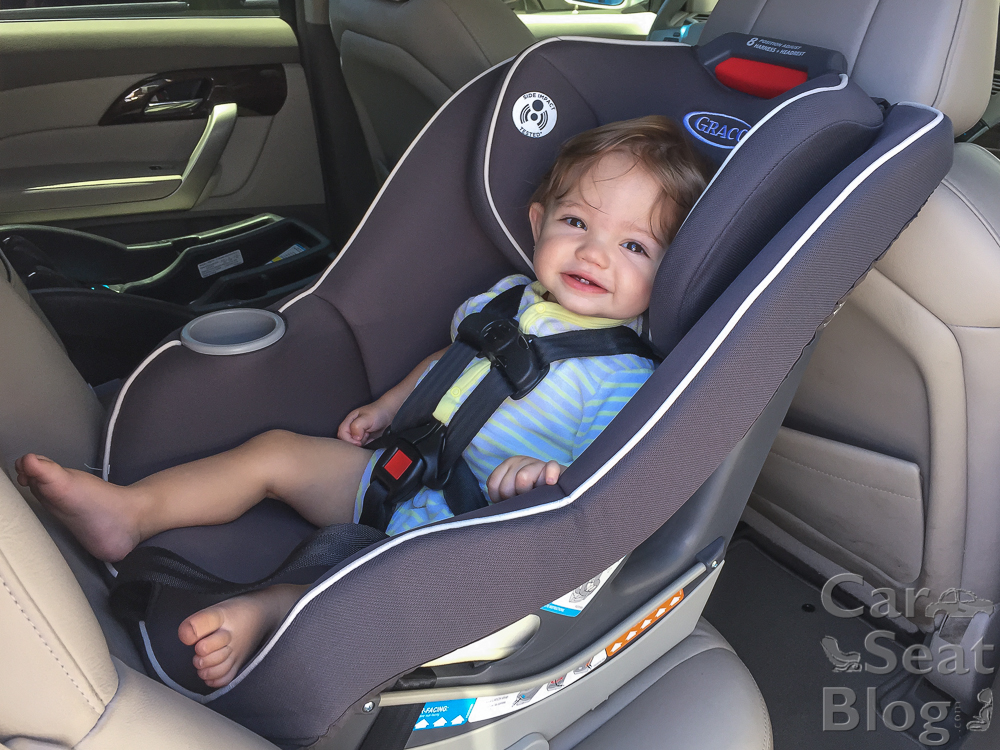