Babyproofing. We are all familiar with it. The first child rolls over and it’s a mad dash to Babies R Us to buy every lock/corner cover/fireplace bumper/outlet cover, etc known to man. The second kid comes and it’s like, “Meh, put away the matches and knives and don’t dump your change on the floor and we’re good”.

But there is one thing that we should remember to do, no matter how many kids are in your home. And regrettably, I slacked on this one. I’m going to tell you what happened last week, and I’m going to feel very guilty and like an awful parent but it needs to be said: Please anchor your dressers/TVs/furniture to the walls. I’ve actually been very good about this and I will admit it’s probably only because Ikea (gotta love those safety focused Swedes!) includes anchor straps with all their furniture. When we moved in here, I dutifully anchored all dressers, TV stands, and bookshelves to the wall. All but one. I meant to do it. But I slacked because I was in a whirlwind of Declan being born within 2 weeks of moving into the house and unpacking and life in general. Plus the dresser is a beast. I can’t even move it by myself, so I wasn’t worried about a 3 year old lightweight pulling it over. Kid doesn’t eat his spinach; he ain’t pullin’ anything over.

And I was right. Until I wasn’t.

He’s opened those drawers a million times. A drawer in our dresser I keep out of season stuff in. I had my back turned to close the blinds while he pulled open the drawer to get out a pair of summer pajamas, and I heard a whoosh and a crashing sound a foot behind me. Oddly enough, despite me never in a million years thinking he would ever pull the dresser on to himself, the second I heard that sound I knew what it was before I even saw him. There it was, the Beast laying on top of my skinny little guy, his sad little face crying over the top of the dresser. I must have grown muscles in those split seconds because the weight of my heart in my feet surely should have kept me from moving. Despite always whining and making my husband help me to move the dresser over when I needed to get something behind it, I managed to lift the dresser and fling it to the side. When I lifted it, the drawers flew out and whacked the poor kid again. I remember cussing at myself in my head for being so stupid. I left him laying there while I started to check him over, but he immediately popped up, kicked the dresser and screamed “STUPID!!!” at it and flung himself into my arms. I choked back tears as I thanked Whoever for my son not being another statistic. Miraculously, despite the Beast nailing him to the floor, he only had a minor goose egg on his forehead and a bruised cut on his arm. He’s totally forgotten about it but I still continue to play it over and over in my head, thinking how easily the outcome could have been different.

According to the CPSC, 25,400 kids are injured every year from falling furniture/appliances and 1 child dies every 2 weeks. Every 2 weeks! From something totally cheap and preventable. Many of these incidents involve televisions, which most people don’t think to anchor. But think about it, how many times are you telling your kids they are standing too close to the TV? How many times do you tell them to stop climbing on drawers? It could happen to you; I know this because it happened to me. I honestly don’t even think Liam was climbing on a drawer. It was too fast, and it happened with me standing right there! 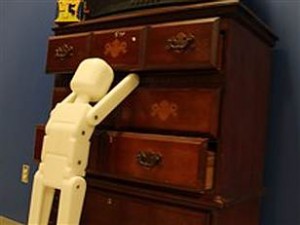 Since then I’ve started taking more precautions despite all the furniture being anchored now. The most reached for items are now in bottom drawers, as well as the heaviest items so the dressers aren’t top heavy. Lamps with the switches on the cords now have the switch easily accessible  from the side of the dresser so there is no climbing to reach it. When something is taken away, it is never placed on top of a dresser, bookshelf, or refrigerator to prevent the temptation to climb up to get it back when I’m not looking.

So please listen and do something simple today: buy some anchor straps and attach your furniture to the walls. They’re about $7 for two on Amazon. Even if you’re a renter, I guarantee your child’s life is worth more than the hassle of patching up some holes when you move. If Amaya could tell you to do it, she would. So would Meghan, Charlie, and Katie . And I’m sure Brooke‘s mom could write an even more passionate post than I ever could.

As a CPST, safety advocate, and healthcare provider, I feel like we are constantly warning parents of the obvious dangers: cars, pools, guns. We never stop to think about the unobtrusive ones. So no, I don’t cap the corners of my counters or lovingly pad the edge of the coffee table. But you can bet your sweet buns I’m anchoring the heck out of my house.

And being thankful that the only thing that came out of all this was a blog post. 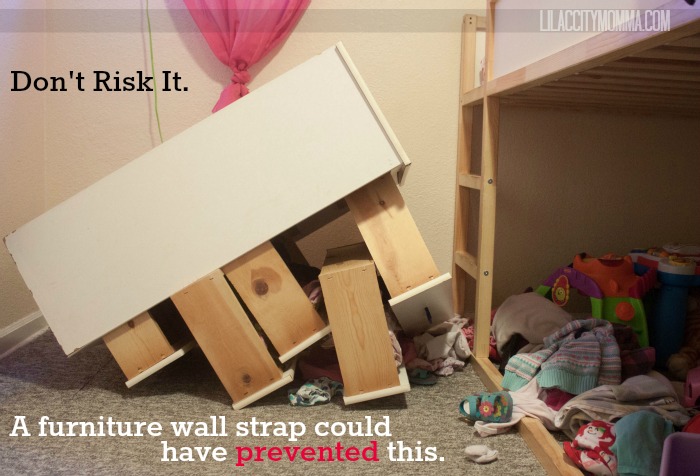