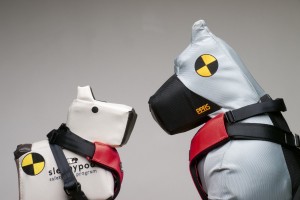 Last September, the Center for Pet Safety released a summary of their study on harnesses for “pets,” though most of us use these harnesses for dogs only. When I originally saw this summary, I scanned through it as I am a pet parent; “dog owner” seems so cold when my dogs rule the house, truth be told. I already had a harness I bought at PetSmart that I liked for my dog. It wasn’t crash tested, but I didn’t have time to buy one that was. I used an IMMI crash tested harness for a car trip where I drove alone with her and it hurt her sensitive underarm area and she managed to twist around in it. Talk about me being a distracted driver! Then last December we adopted a new dog, Macy, and I had the need for another harness, so I looked at the summary again and decided to try out a few models to see which I liked best.

The Center (in their summary, they refer to themselves as “CPS” but for our purposes I’ll refer to them as the Center, since CPS generally means child passenger safety around here) teamed up with Subaru of America to conduct the tests. They did dynamic testing using FMVSS 213 guidelines, the safety standards child restraints must follow, to collect data on the harnesses. The Center chose harnesses for testing where the manufacturer made claims that the harness had been crash tested or provided crash protection.

Obviously pet harnesses aren’t child restraints and don’t fall under the protocols of FMVSS 213, but there are no federal guidelines, or any other guidelines for that matter, for crash testing of these harnesses. Like I do when I teach my technician classes, the manufacturers can throw the harnesses up against a wall and call it crash tested. This should sound familiar since we’re constantly educating parents on the potential risks of using non-regulated products with their carseats. In some cases, manufacturers of these pet harnesses have done tensile testing on the harness webbing and claimed crash testing. In addition, pet harness manufacturers may test a harness in one size, yet claim that all sizes they produce have been tested. That seems a bit dirty, doesn’t it?

Each harness was fitted to a model dog in each harness size range, then underwent a static hold test for 5 seconds first. This was a preliminary test to determine if the harness had enough structural integrity to perform in the crash test. Those that didn’t fail this preliminary test continued on in the crash test to ultimate failure to see how each harness performed. Testing was done at MGA Research Corporation using a custom fixture designed specifically for the pet harness tests.

So What Is the Center Looking for?

Clearly they want a harness that will secure a pet to the vehicle so that in the event of a crash, the pet isn’t running away. More importantly, the pet shouldn’t be a projectile that could cause injury the occupants of the vehicle. If you’ve hung around CarseatBlog long enough, you know that we estimate weight x speed = crash restraining force. So a 30 lbs. dog in a 30 mph crash is going to be coming at you or your kids with approximately 900 lbs. of force. Ouch! OK, so restraint is number 1. They’re also concerned about the animal not hitting the interior of the vehicle. We love our dogs and don’t want them to become casualties either.

So What Am I Looking for?

Like the Center, I have a very specific set of criteria that a dog harness must meet for me to use it in the car.

I picked four harnesses from the list of harnesses that the Center tested to try with Macy. Macy is a hyperactive terrier mutt and weighs around 14 lbs. so all models tested were the small size. In my decision on which harnesses to choose, I decided not to go with the top-rated model, the Sleepypod Clickit Utility, because I felt it would be too confining for my mutt. The Clickit Utility uses the seat belt and lower LATCH anchors to attach the dog to the vehicle seat. We may move to it at a future point when she’s a better rider, but for now, she’s too active and I’d end up with a howling mess in my back seat. 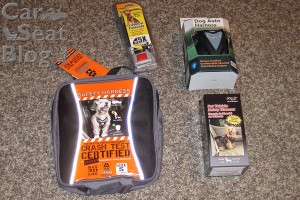 Cons: Difficult to adjust to fit a small dog with small chest—it probably would have been a better fit on my 24 lbs. dog (to say I was extremely frustrated adjusting it is an understatement); can be hard to fit carabiner on to recessed lower LATCH anchor

Why I Chose: It’s a popular model and I was curious. 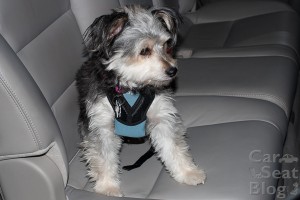 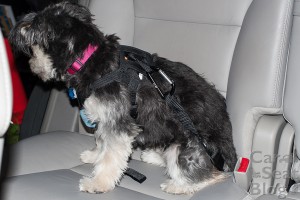 Pros: Actual buckles on harness; has a LATCH connector accessory strap to use instead of the seat belt (comes with some kits)

Cons: Consistently failed crash tests in both available sizes because of stitching at connection point; excessive amounts of straps means it’s confusing to put on dog; stiff buckles to release; seat belt passes through loop on back of harness, which presses down on dog’s back

Why I Chose: IMMI is a manufacturer of car seat harness parts and this harness is a popular model for pet owners. 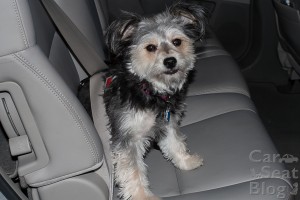 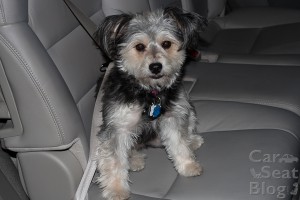 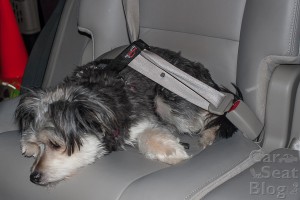 Cons: Seat belt passes through loop on back of harness, which presses down on dog’s back; expensive

Why I Chose: Passed crash tests 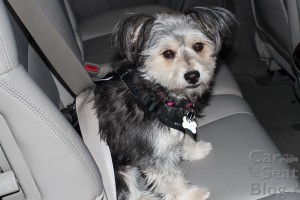 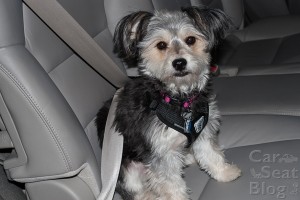 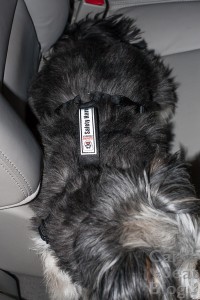 Cons: Not crash tested; tether to seat belt allows for excess movement—Macy nearly jumped out of the car a couple of times and was left dangling; needs to be retightened on dog occasionally

Why I Chose: This harness is not on the Center’s crash test list. I found it on Amazon.com as I was looking for the other harnesses to purchase. 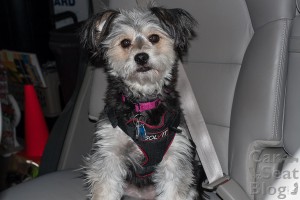 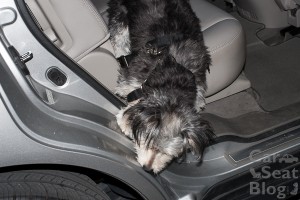 We’re ultimately using the RC Pet Canine Friendly harness. It’s easy to put on Macy and even though it presses on her back, which she doesn’t like, it does a better job of keeping her in place. I do question if having the seat belt going across her back will lead to a back injury should we get into a crash, but it is similar in design to the top-rated Sleepypod Clickit Utility harness and has low head excursion numbers.

Keep in mind that I was testing these on my small dog. A larger dog will fit differently in these harnesses, especially the IMMI PetBuckle and RC Pet Canine Friendly where in my cons, I mentioned that the seat belt pressed down on Macy’s back. She didn’t like that feeling and ended up laying down after about 20 seconds into our trips whereas she didn’t do that with the other harnesses, preferring to sit up looking out the window.

Like carseats for kids, finding a harness for your dog is matching up your dog’s personality with your needs. Definitely use the Center for Pet Safety’s report as a guide to find the safest harness for your family. What they’re doing is a step in the right direction toward safety in the vehicle for all riders. It puts harness manufacturers on notice that they can’t put out inferior products anymore; consumers have the information now and hopefully products will continue to improve.