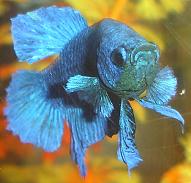 Thank you for all your emails asking for Marvin’s insight on the safest child seats.  A few of you doubted that Marvin has just as much expertise as a leading consumer magazine. So, today, Marvin would like to take a moment to share his expertise by answering some of your questions!

“Dear Marvin, my name is Tina. I’m 22 years old and live in Topeka.  I’m really having terrible trouble with car seats and I heard you were the top expert on picking the safest options!  I’ve tried posting at Car-Seat.Org and a few other forums, but for some reason no one answers me!!! By the way, I have 5 kids.

Tammy Jane was a preemie. She’s a tad squirmy and is already trying to escape her seat! Plus, we have to fit her in the back seat of our 2002 Toyota Tundra Mongo Cab truck with the twin terrors, Timmy and Tommy.  Sometimes I have to transport my teenage brother, Terry Jack, too. The other twins live with my ex-DH in Toledo.   I want her to be as safe as possible!  What color is safest for the cover of her child seat?   -Thanks, Trina Trolya”

Hi Tina, or is it Trina? Marvin’s thinks Tiffany

is the color for Tammy.  Marvin’s other tip for today is to avoid your tap water! TTFN, Marvin.

“Dear Marv, my DH just bought a new sports car that is completely overboard for hauling kids. This thing cost $40,000 and he won’t let me buy a $400 carseat for it! Can you believe that? He’ll be driving our 7 year old daughter to and from school every day. I want to keep her in a 5-point harness until she’s old enough to drive. He seems to think that one of the 29 carseats I have in the basement should work, but I know he needs one that is simple so he can use it correctly. He tried to weld the last one into the car and melted it!  If I sell a few of my old seats on Carseat Swap, I think I can get maybe $300. I’d like for the new one to have a metal frame for safety (and in case he tries to weld again) and also be really easy to use. Can you suggest something that would be suitable for DH in this situation? -Sincerely, Sad Shopper.”

Hi Shopper! I think you’ll agree I have just the one for him.  It’s a great deal right now, so it’s right around your $300 price point, too!  It really is built solid and is so simple even a caveman could use it correctly. Plus, if you buy though our Amazon affiliate link, you’ll be supporting Marvin with a new can of fishy pellets! Check it Out!

“Dear Marvy, you are such a cute fish. I’d really like to get a photo of you in a carseat. Of course, this would only be to help me make sure my own fish fit properly in a carseat and to help educate other parents! Just one little itsy bitsy photo, please? I promise not to put it in a public photo gallery with hundreds of other snapshots I borrowed of fish in carseats or to put it on any of those irreputable internet sites with suggestive photos of small fish. -Hugs, FivePointFishFetish.”

Hi FPFF. It’s against my better judgment, but your request is so sincere and compelling. Plus, flattery will get you everywhere, so, sure, what the heck! 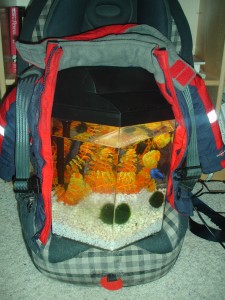 Can you spot the misuse in Marvin’s photo?

5) Marvin’s decor clashes with the carseat cover and the carpeting.

4) OMG Marvin should be in a rear-facing seat until he’s at least 4 years old!

3) Marvin, you’re a tropical fish.  Put up your hood and zip up that thick, fluffy coat or you’ll catch cold!

2) No buckle = Marvin the Flying Fish!

And the Top Marvin Misuse:

1) I wouldn’t have put a fish in that particular carseat, even if it wasn’t expired!