As a non-tech person, I am generally confused by the various terminology used on a regular basis by those who are tech people.  But I am trying to learn.  One of these terms is LATCH, which must be really important because it’s in all caps.  I understand the importance of words in all caps. Like me sitting on the couch on the weekend and watching the NFL or the NBA or why don’t the kids go play in the STREET but watch out for CARS and while you’re at it go get the MAIL.

But LATCH apparently is in all caps not just because it’s a really important concept.   It’s an acronym, and, as I have learned through diligent research on Wikipedia, means Lines Attached To Car Hooks.  The Hooks part are those little U shaped things crammed down in the seat with all of the lost change, cracker crumbs, old gum and unidentifiable sticky stuff.  But those hooks get tech people really excited, because it makes installing car seats EASIER and QUICKER so the kids are SAFER.  Even I have installed a seat with LATCH and did not immediately have my wife rip it out mumbling some jargon to herself, all of which is probably some variation on the theme that I must be an IDIOT to have installed the thing in that particular manner.  Once the lines are attached to the car hooks by a tech, the other techs oooh and aaah and do happy dances and chant LATCH over and over.  It’s all very exciting.  It does seem like a great idea, though not the part where you have to shove your hand into a vehicle’s equivalent of where the sun don’t shine. But one does wonder why someone didn’t come up with it before.

Then there’s EPS foam.  That first part is also an acronym, and the foam part isn’t as important because it’s just in lower case.  The Internet says that EPS stands for Expanded Polystyrene.  Which is only two words, so it really should just be EP foam, or maybe EPs foam, or to be consistent E[some other random letter from the word Expanded, perhaps an N]PS foam.  That’s important stuff too and is sort of like a million squished Styrofoam cups packed into the innards of the car seat.  But it’s expanded, not squished.  Because Squished Polystyrene would be SPS foam.  And that would be  CONFUSING.

I have also learned about belt clips.  My wife the tech gets super excited about belt clips.  This is the least critical concept introduced so far with not a single capital letter to its credit.  But these clips are still important, though I think my wife only likes them so much because they resemble the letter H, also the first letter of her name.  There are several in each of our glove boxes.  They have the same reproduction habits as paper clips, and if you put two in your glove box, you will have four in a week.  We have these things in our glove boxes even though none of the car seats currently rotating through our cars use belt clips.  But somehow the wife feels more comfortable knowing they’re there.  It’s kind of like the 12 year old container of cumin on the spice rack in the kitchen.  You may have no idea why you would ever need it, but if you do need it and it’s not there, you’re hosed.  So you’d better keep it around.

As I learn more about car seats, I am coming to the sad conclusion that you cannot judge the importance of a concept by the number of capital letters it has.  It’s all important stuff, though none of it makes any sense and most of what my wife tells me is probably made up.  That is why only people who have taken hours-long classes can install these things.  So she’s the expert.  But should I believe her when she says we need to drop a couple of bills on a new seat with LATCH, lots of EPS foam and it doesn’t need belt clips?  Taping a bunch of Styrofoam cups onto the old seat being an unacceptable substitute, and the technical terms being so intimidating, and Wikipedia often not providing entirely reliable information to allow me to check what she’s telling me, who am I to deny the kids such wonderful technology? 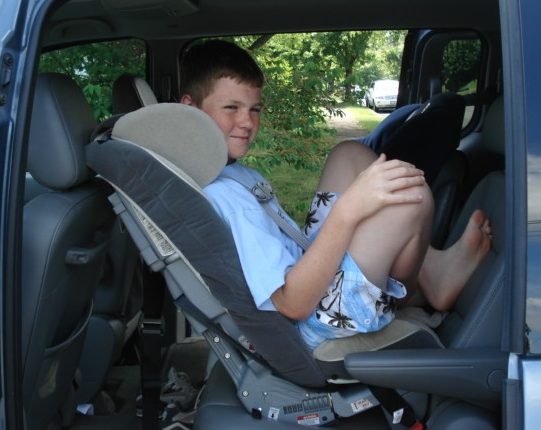