Home
Previews
ABC Kids Expo: It’s Another Photo Blog (With a Video and Commentary, too)!
Tweet Pin It

Here’s yet another photo blog of some things we saw at the ABC Kids Expo.  Some we’ve touched upon in earlier blogs, others we have not.  As we like to frequently remind viewers, many of these are prototypes and the final retail versions may differ slightly from what you see at the show.  Enjoy!

For some time, Britax has been including “overmolded” buckles (below, left) on many of their products. This is a minor running change to the design that has no safety implications. It may, however, help reduce strap twisting on the Britax Frontier, a model that uses slightly different strap material than the Britax convertibles: 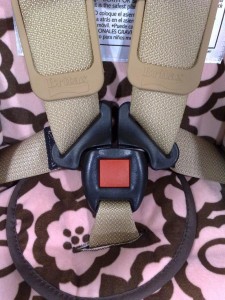 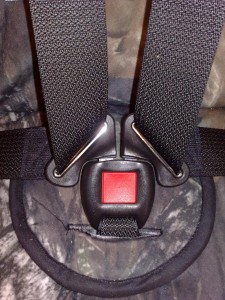 We didn’t have much new product news from Britax, beyond the new accessory Slide Guard clip that will be available later this year for the Frontier at somewhere under $30.  As noted in our Advocate review, Britax is shifting to “non-handed” LATCH hardware that will not require you to re-route them from one side to the other when you transition from rear-facing to front-facing.  The Roundabout, Roundabout 50 and Marathon CS are now using the same attachments, with some other models to follow in the future.  Also, as we’ve probably mentioned at some point, their D-ring strap for rear-facing tethering was lengthened by a couple inches earlier this year.  Fashions?  Pink Sky will appear on the Parkway SG later this year, with Mossy Oak and others to follow early next year.

We do have a photo of a Limited Edition Boulevard CS.  Also, some dealers are now including a free extra base for the Chaperone infant carrier when you purchase both the infant seat and the Chaperone stroller together.  Combine that with the $100 rebate offer on the combination and it’s a very good deal!  The Chaperone travel system has some new accessories (sold separately), including a footmuff, a rain cover and a mesh cover to keep bugs and sun off baby! 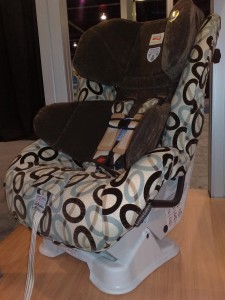 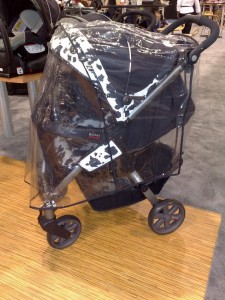 Here’s the Kiddy World Plus.  Please don’t let the Chucky-like doll scare you (we thought that demonstrating the doll’s removable head would not have been good for a video of a child restraint!).  The energy absorbing section of the booster uses the LATCH system to attach to the vehicle.  A buckle is included for ease-of-use. 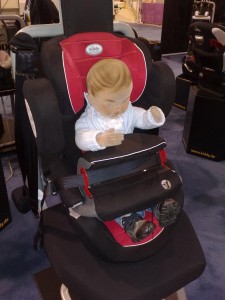 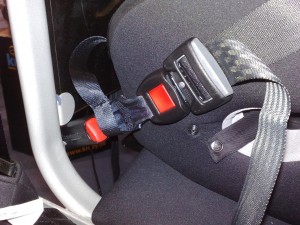 Kiddy has another booster that should follow the World Plus restraint into the USA. Notable differences from the World Plus are an adjustable leg length section and a shock absorber system to limit peak forces in a crash.  It does this by deforming slightly as the seatbelt applies pressure in a crash.  We’re told that the popular European “Cap’n Sharky” may be replaced with Pirates of the Carribean in the USA 🙂  We add a couple photos of the Kiddy infant seat that you may have seen in our earlier videos.  We love the rigid LATCH base and foot prop (Kiddy calls it a load leg), features not seen on an infant seat in the USA since the Britax Baby Safe was discontinued.  It also has audible alerts when you have securely and correcty installed the base to the vehicle and the carrier to the base.  The USA version will likely have a 5-point harness.

Here are a couple photos from Cybex of the X-fix Booster.   Cybex touts a sturdy, “no-torque” design that improves side impact protection compared to boosters with backs that can twist.  Like the Kiddy infant seat, the X-Fix booster has the great rigid LATCH feature that may also improve safety in side impacts.  Turns out, they were allowing photos of the booster, but not of the prototype infant seat and some other products. 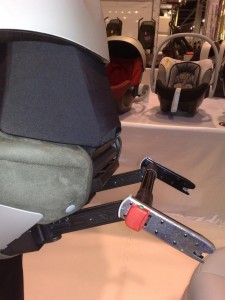 We didn’t forget about Clek!  The Oobr is now shipping.  We covered it at last year’s show, so there’s not much we can add until we have one to review.  Until then, peruse our photos!  The rear view is a cutaway prototype showing the metal frame that is not normally visible.  It’s another model with the superior rigid LATCH system!

We’re not done with rigid LATCH, yet!   What’s the big deal?  Safety, for one.  Ease of use, for another.  Check out our video from the Carseat Quandry blog, showing the last forward facing model available in the USA with this feature.  This time, it’s a new company with a new forward facing child restraint, based on some innovative technology.  We were happy to see a familiar face at the firstSEAT exhibit, Tom Baloga (former president of Britax USA).  He’s also a vehicle safety expert, as Vice President of Engineering at BMW USA.  We hope to have him as a guest in that capacity for a chat session at Car-Seat.Org in the future.  The president of firstSEAT, Darryl Donovan, also shared his expertise with us. He talked about the patented technology in the Revoution 22-60 pound carseat.  We are very anxious to see this product in its final form next year.  For now, here are some photos of the prototype on display at the show.  Please keep in mind that the final retail version may differ, as is the case with many of the products we’ve shown in our ABC blogs!

Here are two snapshots of the new Graco Nautilus Elite, with new lockoffs and adjustable head wings.  It’s a very popular child restraint and we hope to have a sample of the Elite version to review in the near future! 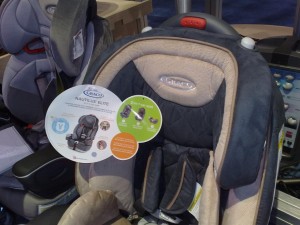 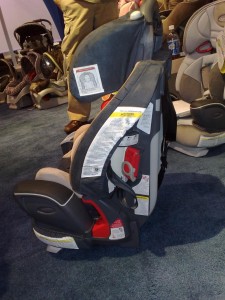 Kecia’s full review of the Combi Zeus 360 is coming soon.  It’s a great improvement from the original Zeus Turn.  The increased rear-facing weight limits and redesigned belt path and swivel mechanism are welcome changes!  Below, some photos for those who haven’t seen it already: 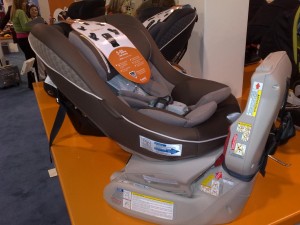 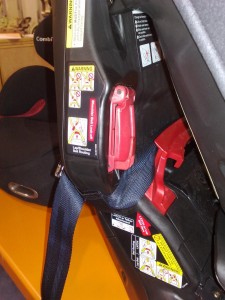 The  Learning Curve/Compass B530 booster line shows some of their new fabrics that will appear on various models.  Unfortunately, Compass did not want us to take photos of their new Pathway booster prototype, but it looked nice with well defined and positioned belt guides.  The Harmony Dreamtime booster won an award at the show and will soon be updated with design improvements, some of which were suggested by our very own Kecia!  The Baby Armor is their upscale booster, shown with bamboo fabric inserts that are very plush, have anti-bacterial properties and are a renewable resource, too.  Organic fabrics are a big trend in baby products.  If you wonder why all those great natural fibers don’t make their way from strollers and cradles into carseats, it’s usually because of the flame retardant requirements mandated by the government.  That often means synthetic fibers, chemical treatments for natural fibers, very expensive natural fibers or some combination of those items are needed to meet the standards for child restraints.

Speaking of organic fabrics, Orbit has introduced an all-weather footmuff with Orbit green FR, a very soft organic fabric that does not need chemical treatments to meet the flame retardant standard!  It’s an accessory for their travel system and will fit all of their on-the-go seats.  The Orbit G2 will be released early next year with some nice improvements, as you can see in the video.  Heather will have a full review of the current Orbit travel system soon! 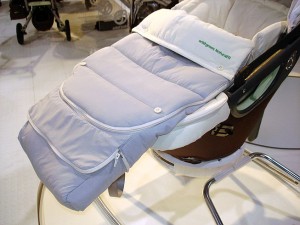 The Safety 1st OnBoard 35 Air looks like a very nice infant seat.  The Air Protect cushions extend a good length down the side of the shell to protect small and large babies.  The four harness height adjustments have a nice range to accommodate newborns and older babies.  There’s also a separate level indicator to get the correct recline depending on the age of the baby.  The crotch strap has 3 slots, and the length can be adjusted by looping it through multiple slots as shown!

That’s all for now.  Coming in the days ahead we will have some photos of a few other products that are not carseats or strollers, along with a dump of our remaining photos and some other thoughts on what we learned.