Home
Health and Wellness
Should You Toss Your Toxic Car Seat?
Tweet Pin It 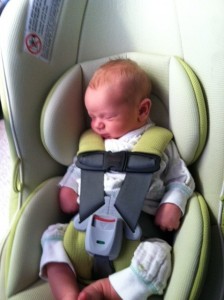 Every few years, HealthyStuff.org evaluates car seats based on the presence of flame retardants and certain heavy metals. They just came out with a new report, and you might be concerned about the findings. Let’s talk about what this all means.

First, let me say that I’m concerned about flame retardants, too. Some people brush it off as hippie-helicopter-parents-flipping-out-over-something-harmless. But some of the chemicals found in car seats have known detrimental effects, some have suspected detrimental effects, and at least one is slated to be phased out of use under the Stockholm Convention (a global treaty signed by over 150 countries who have vowed to reduce persistent organic pollutants).

I’ve written other posts about flame retardants for CarseatBlog, and I’m concerned about my own children’s exposure, so I’m not here to tell you the study doesn’t matter or should be ignored. But I’m not going to tell you to panic and throw away your seats, either.

This current study from HealthyStuff appears to be more thorough in some ways than past ones. This study looked for the presence of brominated, chlorinated, and phosphate-based flame retardants. They show which retardants were present in which seats, and they show the potential hazards of each of those compounds.

They do a much better job than in the past of explaining how these chemicals can enter a child’s body: through dermal (skin) contact, inhalation, or ingestion. The organization also provides a better explanation of their methodology and how they weighted the results to come up with their rankings.

Here are some things to keep in mind when looking at the rankings.

With all that said, what can you do if you’re still concerned about potentially dangerous chemicals in your seats?

If, after all this, you’re still panicking over your particular seat, then by all means get a new one. I don’t think it’s necessary, though.

Remember, I don’t take this topic lightly at all, but guess what seat my youngest child is currently riding in? I won’t name names, but it’s among the seats listed as a “highest concern.” I’m not switching him out of it, though. For one, I have no way of knowing whether his particular seat has the same components as the one tested (nor do I know how any new seat I’d get him would compare to the samples they used). I do clean the seat regularly, and we try to keep windows cracked in the summer as long as there’s no threat of rain. I do my best to mitigate his exposure by avoiding flame retardants in other areas, especially in our mattresses and bedding, where my child currently spends about half his life.

I will definitely contact the manufacturer to encourage them to remove brominated fire retardants from all their products, but in the meantime I’m not going to sacrifice the seat in question, which fits well in my car, fits my child well, and is easy to use correctly each and every time.