Rear-facing is still the safest way to travel for young kids, within the limits of their convertible carseat.  Even without a rear-facing tether, Britax ClickTight convertibles will allow many kids to continue rear-facing until 3 or 4 years old. 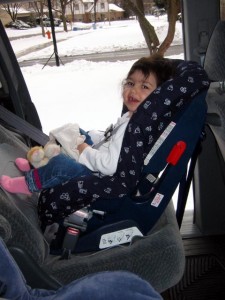 The authors of CarseatBlog have endorsed rear-facing tethering since it was introduced in the late 1990s on the original Britax Roundabout.  We also understand that it can be difficult or impossible to accomplish in some vehicles, and may conflict with passenger-side occupant detection systems in other vehicles.  With the lack of real-world data showing how many consumers adopted this technology and a lack of studies about how effective it may be at preventing serious injury, we appreciate the transition to anti-rebound bar systems in general.  We note that most convertible carseats in the USA lack any type of anti-rebound feature, and rear-facing is extremely safe with or without an anti-rebound system.

Our main misgiving about this change is that the anti-rebound functionality will not be included in the box as a standard feature in the USA (The ARB is now standard in Canada).

The Britax Boulevard and Advocate CT and G4.1 models remain on our Recommended Carseats List for 2015.