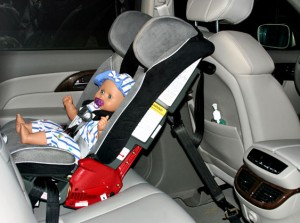 In the What Is A Tether? blog article, we learned all about forward-facing tether use. But what if you have a convertible carseat that can be tethered in the rear-facing position? How do you do it? And why?

Which Seats Can Be Tethered Rear-Facing?

Let’s start with which current carseats can be tethered rear-facing. There are four manufacturers which allow their convertibles to be tethered in the rear-facing position: Diono (formerly known as Sunshine Kids), *Clek, Combi, and Peg Perego. If your carseat isn’t listed, it can’t be tethered when rear-facing and the tether should be stowed safely away until you need to use it for forward-facing. 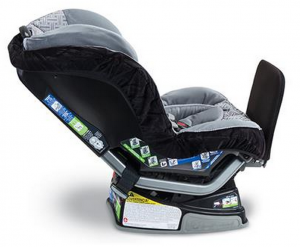 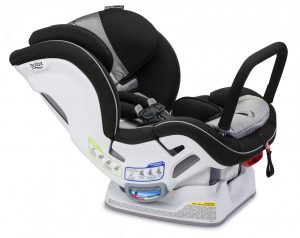 The reasons for a movement toward anti-rebound bars are two-fold: vehicle manufacturers are concerned with the advanced airbag wiring that may be housed around the front seat legs and ARBs perform the same Swedish style rear-facing style tether function with less force being transferred to the child. Even though there’s minimal force applied to the tether and carseat on rebound, that force is transferred to the child as a sudden stop when it’s tethered rear-facing. The ARB absorbs the force and allows a bounce-back so the child isn’t absorbing that sudden stop. To date, we don’t know of any injuries to children in carseats tethered rear-facing vs. using ARBs. These are energy management features on higher-end carseats that are like icing on a cake. Any rear-facing child is going to be *very* safe.

There are two styles of rear-facing tethering: Swedish and Australian method. Swedish is the more popular of the two in the U.S., Canada, and Europe, and has the tether attached to a point under the front seat. Australian is more common in, you guessed it, Australia. In the Australian method, the tether comes back over the carseat and is anchored to the vehicle’s tether anchor. Britax was the only manufacturer that allowed Australian tethering because of the shape of its tether. There are pros and cons to each method. 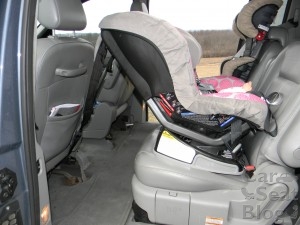 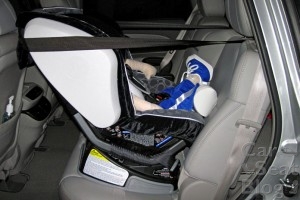 A note about Australian seats and why they tether to the vehicle’s tether anchor: Australian convertible carseats have an ARB/foot that prevents the seat from rebounding into the vehicle seat. That anti-rebound bar, combined with the tether that doesn’t allow downward rotation, means that there is little movement of the carseat in an impact.

Why Should You Tether Rear-Facing

Many parents and caregivers are concerned about a rear-facing carseat rebounding into the back seat. Rebound is the secondary movement a rear-facing carseat will make during a frontal crash. The initial movement is a downward rotation as the carseat is pulled towards the point of impact in a frontal crash. After the carseat reaches its peak rotation down, it will start to rebound towards the back of the vehicle seat. This is similar to how a driver moves forward into his airbag and then rebounds back into his seat in the late stages of the crash sequence. This rebound motion isn’t necessarily a terrible thing since rebound is generally considered to be a “low energy event.”  If there are injuries to the child that occur as a result of rebound, they should be relatively minor because the main forces of the crash have already been absorbed by that point. The most common rebound-related injuries occur when children rebound into something that has been placed on the backseat facing them (such as hard mirrors or toys dangling from the infant carseat handle). Contrary to what some people believe, rebound isn’t something that was designed or engineered into a rear-facing carseat as a way to manage energy in a crash; it’s just the result of the top of the carseat not being connected to the vehicle.

By tethering a rear-facing carseat Swedish style, rebound is greatly reduced. The installation may also be more secure and there may be benefits in side impact or rollover crashes simply because the CR is firmly attached to the vehicle in more than one place which improves overall stability. There’s a definite benefit in rear impacts since tethering a seat Swedish style reduces head excursion, much the same way a tether works for a forward-facing carseat.

But let’s be clear: rear-facing tethering is optional. No carseat requires its use; think of it as an added feature.

Since the Swedish method uses an anchor point under the front seat, you’ll have to move the front seats forward. Look for a solid point that’s anchored to the vehicle floor, like a front seat leg or seat track. If the point you want to use isn’t solidly bolted to the vehicle frame, there’s a possibility the tether might fail in a crash. A seat that is able to be tethered rear-facing will come with a tether connector strap, otherwise known as a D-ring (though lately, they don’t look like “D” rings). The current tether connector strap being shipped with Britax convertibles is a piece of webbing with a loop on each end; there is no metal ring on one end anymore. This D-ring is threaded around the solid point you’ve found and the carseat’s tether is attached to it. If the D-ring doesn’t fit around the leg, see if the plastic covering will pop off. These cosmetic pieces usually are removable and can be put back on either after you’ve attached the D-ring or after you’re done with rear-facing. 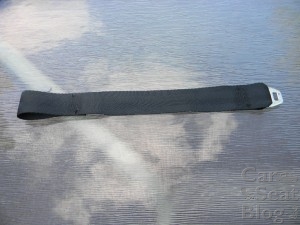 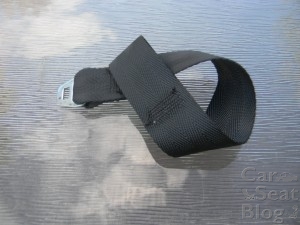 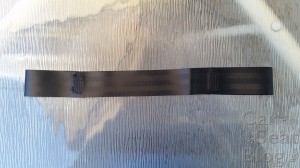 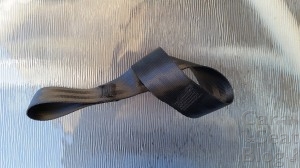 If you are installing the rf seat in a 3rd row or have one of the rare vehicles that has a tether anchor on the back of the front seat or front seat track (some Ford minivans do, as do some Volvo and Saab models), you can attach the tether of Britax seats directly to the tether anchor on the vehicle seat in front of the carseat, as long as that tether anchor isn’t already being used by a ff seat (Diono/Sunshine Kids doesn’t allow their tether to be used in this manner). It’s much more important for a ff carseat to be tethered than a rf one if you have to choose between which seats get tethered. Plus, you can always use the d-ring for the rf seat. And it’s never preferable to turn a carseat ff because you can’t tether rf.

For positioning, try to use an anchor point closest to the carseat; for example, if you’re installing the carseat on the passenger side, use the passenger side front seat leg, not the driver’s seat leg. This will help keep the carseat from leaning excessively. Carseat manufacturers also test the rf tether when it’s 20° off-center or less. Twenty percent is about the distance to the vehicle seat front legs directly in line with the rf carseat. Attach the tether to the rf tether point you’ve created with the d-ring or to the tether anchor and pull the slack out of the tether. Do not use the tether to change the angle of the carseat; simply pull it snug. 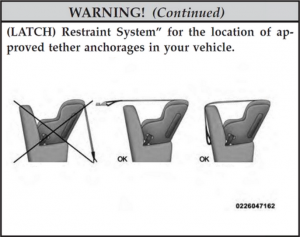 Thanks to CDNTech for providing her ’03-’08 Grand Caravan pictures in this thread: http://www.car-seat.org/showthread.php?t=28939; and thanks to Emily for providing the pictures of her ’12 Volvo S60 front seat track tether anchors!