I recently had the opportunity to test drive the all-new 2015 Hyundai Sonata on a road trip from Chicago to Ann Arbor, Michigan, with a stop at the 57 Burger Barrel on US Highway12 for a quick burger, fries and homemade root beer. 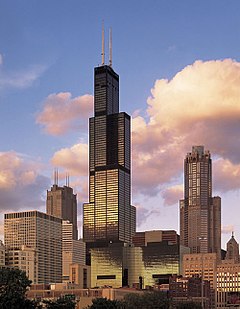 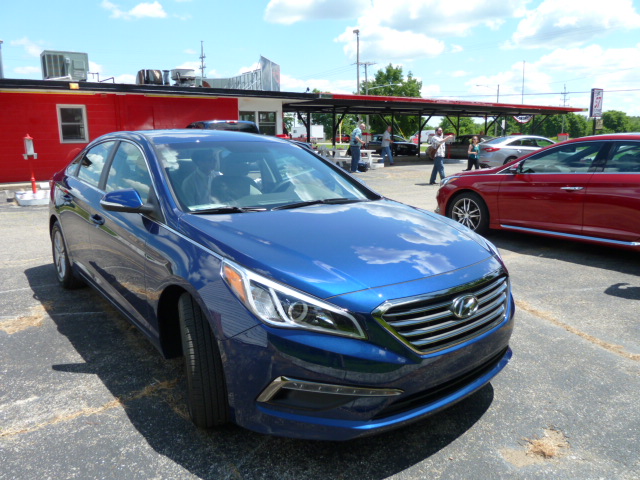 While I haven’t had a chance to put any carseats into one yet, I definitely got a good feel of the new Sonata.  I had just driven the 2014 Honda Accord the week prior, so some comparisons are in order.  In particular, the back seat is well organized, with no crossover of seatbelt or LATCH anchors. The buckle stalks were fairly short all around and should be reasonable for installation of most carseats.  It’s wide enough to fit 3-across with careful selection.  The side bolsters on the outboard seats appear to be less pronounced than in the Accord, possibly making it easier to fit larger forward facing seats.  These might still be an issue for wider combination booster seats, though. 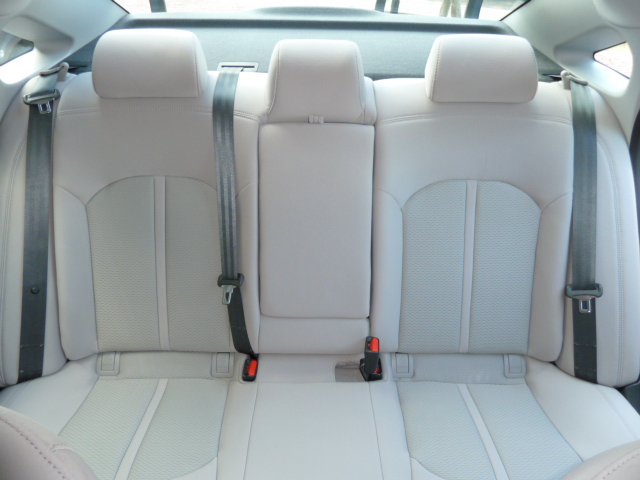 The Sonata is all new and has already received an IIHS Top Safety Pick+ for 2015, an improvement over the previous Sonata.  The 2015 model earned an “Acceptable” result in the Small Overlap frontal crash test, while the previous model managed only a “Marginal” rating.   The new Sonata now has a full set of advanced safety features optional, including a frontal collision warning that was previously unavailable.  Lane Departure, Cross Traffic and Blind Spot warnings are also available, as is the BlueLink system with crash notification.  The frontal collision warning system earned a “Basic” level of protection from the IIHS for trims that have this option package.

The improved IIHS crash test result was likely made possible by an increase in advanced, high-strength steel alloys that now comprise around half of the weight of the bare chassis, up from 21% in the previous model.  That also helped Hyundai to increase overall body stiffness to improve ride and handling characteristics as well.  I found it to be as good of a highway cruiser as the Accord in terms of ride and noise.

The styling of the new Sonata is an evolution of the previous model, with slightly more aggressive front and rear end treatment inherited from the upscale Genesis.  No comparison to the conservative Accord.  For families, size has increased to be one of the largest, if not the largest midsize sedan.  In particular, width is increased another inch that hopefully will help for fitting three kids and/or carseats in the back.  Overall, it has a class-leading passenger volume and front head room and leg room as well, meaning a little more space than Accord all around.

Assuming the NHTSA crash tests earn it a 5-star overall rating like the previous model, the 2015 Sonata should be among any family’s top picks for a midsize sedan.  I was very impressed on the road with the Limited model that is already in showrooms.  I also drove the 1.6L turbo four Eco model (coming in September), which has a budget price tag and great fuel economy as well.  We obtained 38 mpg on the highway during our trip!  Unlike some mainstream auto reviews, we appreciate that budget is a big factor for many of our readers and the Eco trim starts around $24,000 with an estimated EPA 28mpg city, 38mpg highway, 32mpg overall.  Not bad for a model the EPA thinks is a full size sedan! 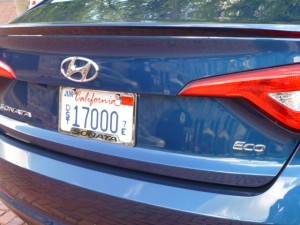 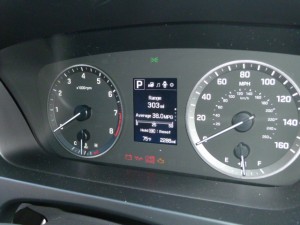 The main drawback for me is that to get all the safety features including frontal collision and lane departure warning systems, you must spend over $32,000 MSRP on the Limited or Sport 2.0T trim with the Tech AND Ultimate packages.  Meanwhile, the 2015 Subaru Legacy sedan with AWD can be purchased with the excellent EyeSight system in the lower Premium trim for around $25,000.  And for that, you don’t just get collision warning, you get one of the best autobrake collision prevention systems on the road.  I only wish that more manufacturers will start to follow Subaru’s lead and put life-saving advanced safety features within reach of more families in their all-new family vehicles.  Of course, if you ante up for the Sport 2.0T Ultimate model, you get all the goodies and the exclusive Urban Sunset color option, too (below).

Thank you to Hyundai USA for this great media event!