Sometimes, it doesn’t take an all-new model to distance itself from the pack.  The previous Pilot was already a great choice for kids in the crowded midsize SUV market.  With a little “refreshening” plus a few feature changes, you can make a good thing even better!  That’s the case for the new 2012 Honda Pilot crossover sport utility vehicle.  With an EPA rating of 18 city and 25 highway in front wheel drive trim,

Honda claims it is the most fuel efficient 8-passenger SUV on the market!  Honda also gave the EX-L and EX trim streaming audio and HandsFreeLink, a nice safety bonus to keep your hands on the wheel!  Improved noise insulation is a nice improvement, also, as are the larger display and multi-view camera on higher trim levels.

Many will appreciate the updated appearance.  It actually *looks* like an SUV.  Many buyers opt for an SUV over a minivan or station wagon, despite the many advantages of minivans.  Often, this choice is made because of the soccer mom/dad minivan image.  The funny thing is that many of today’s crossover SUVs are sleek enough that they look little different than a glorified minivan or wagon!  That’s not the case with the rugged-looking Pilot.  Some reviewers and buyers complain it is too boxy in appearance, but really, unless you actually need heavy duty towing or off-roading capability, isn’t that what sets apart a three-row SUV from a minivan?

Well, there is at least one other thing:The Pilot sits relatively high, which helps with a view of the road in general.  The long hood and wide pillars do detract from overall visibility, but it is a little better than average in the midsize SUV category.  The downside of this is that the step-in height can be formidable for smaller kids, but still not as bad as a full-size monster SUV.  The Pilot is also a little shorter than most minivans, making it easier to park and fit in the garage.  Finally, AWD is available, of course, unlike most minivans.   With 4WD option, you get modest towing (5,000 lbs.) and can do limited off-road driving.  Though most families rarely do these things, for those that do, minivans really aren’t an option.

While the second row is almost as functional as some minivans in terms of seating adults and kids, you’ll find the third row and cargo space behind the third row to be lacking compared to most minivans.  With minimal legroom, it might seat two smaller adults on a short trip with the second row moved forward.  Being low to the floor, it will keep their knees and thighs well above the seat cushion.  It’s best suited for younger kids in seatbelts and will also fit two carseats.  In fact, it has a full set of three top tether anchors and the passenger side seat provides one LATCH position!  Unlike some competitors, the shoulder belts are properly mounted behind the seat and should work well for most kids.

The main issues are the very narrow middle seat, the relatively narrow width overall and the short, rigid buckle stalks for the passenger and middle seat.  The narrow spacing of those buckle stalks will make it very hard for kids to buckle themselves in most boosters, but very narrow boosters like the BubbleBum (photo, right) should work fine there.  The third row does have a handy split-folding feature.

The good news comes in that second row, where the middle seat is not just an afterthought.  It should accommodate smaller adults and most carseats, too.  Unlike the competition, it even has its own dedicated pair of lower LATCH anchors!

Plus, the second row is wider than average, so it can fit various 3-across or adjacent carseat arrangements better than most other midsize SUVs.  Even if you have a wide seat like a Britax Frontier 85 SICT, a small adult or older kid has just enough room in the middle to help care for baby  in a Graco Snugride 30 (photo, left).  The split 60/40 bench is also fully adjustable.  It slides forward and back and all seats recline as well.  That is a big help if you have more than a couple carseats or frequently have kids in the third row.  The seatbelt buckles are all on flexible stalks, but are relatively short to provide a good compromise for carseat installation and for kids in boosters.

Some lower LATCH anchors can be hard to access in both rows, but definitely not the worst I’ve experienced.  There are a couple great spots to attach a rear-facing tether accessory strap for your Britax, Diono (Sunshine Kids) or Combi convertible (photo, right).

How’s it drive?  Nice!  The main complaints I’ve had over the years with the Odyssey and Pilot are that the ride comfort and noise have generally lagged the competition.  While they still don’t lead the category on these measures, the improvement Honda has made is much appreciated.  Plus, overall performance is still quite good.  The handling, acceleration and braking are all competent, thanks in part to high quality Michelin all-season crossover tires on my tester.  You won’t find yourself thinking you are driving a car, but it’s quite reasonable for one of the larger midsize SUVs.  I had no particular complaints around town or on the road.  Fuel economy according to the trip computer was around 17 mpg on most trips, about what is expected for the 4WD version.  Kudos to Honda for improving fuel economy, the area where midsize crossover SUVs still tend to be greatly lacking.  Sadly, many don’t even get 20mpg combined EPA city/highway ratings like the new Pilot.

In terms of safety and crashworthiness, there isn’t a lot I can tell you.  The NHTSA and IIHS have not yet completed their testing of the 2012 model.  I expect results to be at least as good as the similar 2011 model, since this is a mid-cycle refresh and not an all new model.  The 2009-2011 model only lacked in terms of a marginal roof crush strength rating from the IIHS.  From the NHTSA, the 2011 model received a 4-star overall rating in the new tests and did well overall in all the frontal and side impact results.  The 2012 model has not yet been tested for side impacts, but retains good frontal crash test results from the government.

The interior features are simply awesome.   The quality and appearance of the black leather interior in my tester were exceptional.  Seat comfort is quite good in the first and second rows.    Kids remain entertained with wireless headphones for the optional DVD entertainment system (photo, right).  With the second row moved all the way back, a rear-facing infant seat behind the passenger leaves just enough legroom for average adults in front (photo, left).

Even a taller rear-facing convertible like the Sunshine Kids [Diono] Radian fits well with LATCH in the second row middle with no impact on the front seat legroom (below, left).  There’s plenty of room to puzzle the Radian next to a larger combination seat.  The third row is compromised for adults, due to the legroom issues already mentioned, but there is enough for kids in a combination seat like a Graco Argos 70 (Similar to Graco Nautilus, below, right).  Access to the third row is fine for kids, but somewhat narrow for adults.  The cargo space behind the third row is among the best in the midsize class.  Combined with 2nd and 3rd rows that are split and fold flat, there is a lot of flexibility for both cargo and passengers.  The rear hatch opens entirely or you can open just the top glass section separately. 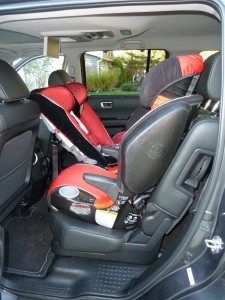 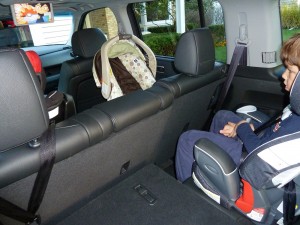 Editor’s Note:  The 2012 Pilot is not affected by the recent recall for a small number of defective front seatbelts. It’s sometimes hard to recommend anything but a minivan to families with lots of small kids.  Top minivans cost less than similarly equipped SUVs.  They get better fuel economy.  They have more cargo space.  The seating is more flexible for passengers, especially when carseats are an issue.  Sliding doors are awesome for kids, too.  Unless you need to tow more than a few thousand pounds or do heavy duty off-roading, why would you even consider an SUV?   Of course, we understand the stigma of driving a minivan!  I recently “downsized” from a minivan to an SUV after 10 years of driving a family truckster.  With that in mind, the Honda Pilot sets the standard for seating kids and also for fuel economy in a midsize, 8-passenger SUV.  It’s still no Honda Odyssey in terms of being family friendly, but it’s as close as you will find in in an SUV, with the possible exception of some monster SUVs that cost a lot more and get awful gas mileage!  Plus, the Pilot is rugged-looking enough that no one will ever mistake it for a minivan or station wagon!

Thank you to Honda and G. Schmitz & Associates for providing the Honda Pilot Touring 4WD used in this review.